Apartment creep
One tool in the compact cities toolbox is boosting residential densities along arterial roads. It’s a tool that should be used sparingly.

According to a report by Bernard Orsman in the New Zealand Herald, it’s a tool giving rise to mixed reactions along Great North Road, Grey Lynn, as planners apparently exercise their discretion to rise above the proposed Auckland Unitary Plan by allowing apartment buildings higher than originally planned.

This raises questions over the rights (or otherwise) of current residents to sunshine and views and over the impact of new bulky structures on heritage areas and buildings in the inner city (Figure 1). To be fair, the car yards along Great North Road hardly merit preservation, although adjoining and nearby villas may do. The trouble is, though, this is not an isolated example.

The other issue worrying residents is simply the impact of so many more people – and their cars. Allowing six storeys where the original intention was four (something that some local residents could apparently live with) makes for a substantial increase.

Do inner city apartments stack up?
I questioned the economics of higher density inner city dwellings in Auckland some time ago. These concerns are confirmed by developer Brady Nixon in the Herald article. 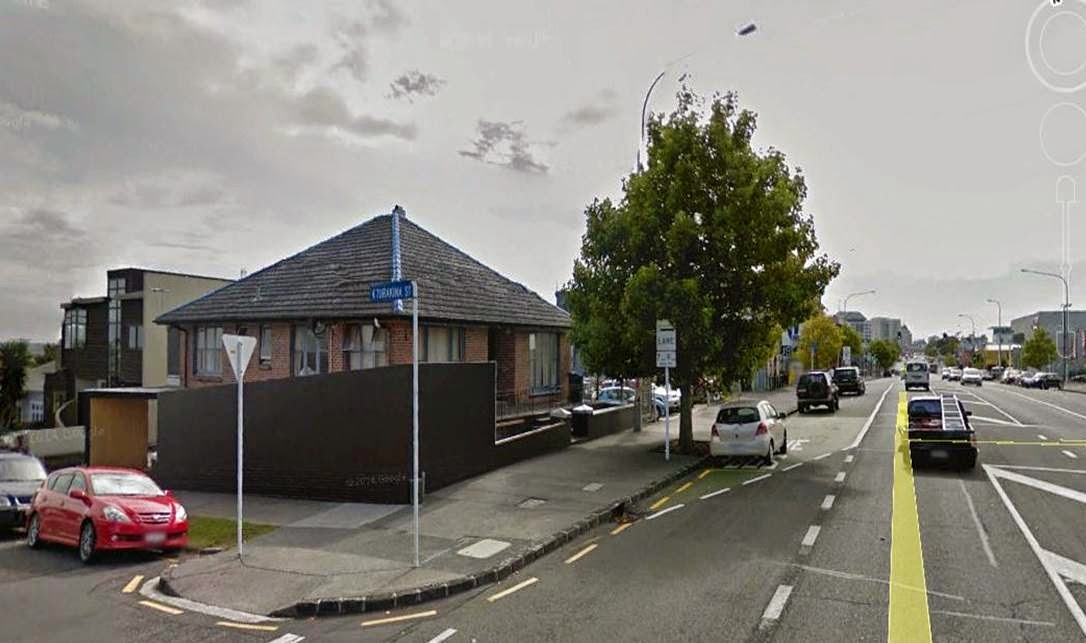 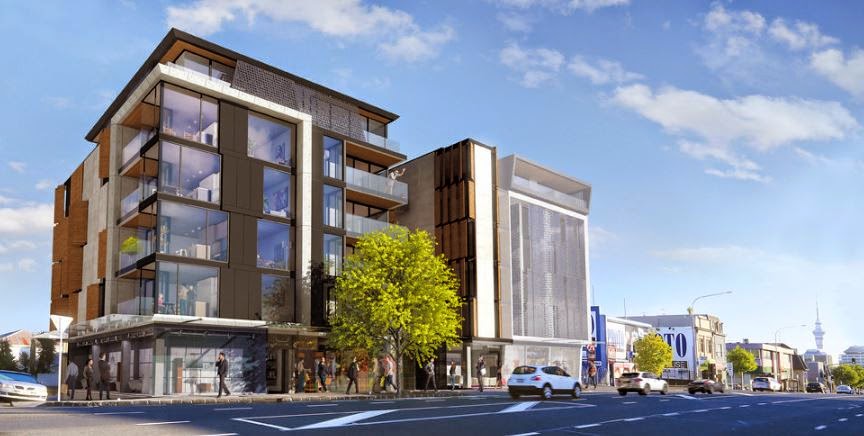 Good for some
There is no doubt that inner city[1] living suits particular markets, primarily the 20 to 30 age group, people in tertiary education, starting jobs, building careers, yet to develop permanent relationships. This is demonstrated in my last post.
But that will account for well under 20% of population growth over the next 15 years [2]. How many of this group and recent immigrants (40% of inner city residents lived overseas five years ago) will be able to afford well designed apartments?

What can we deliver?
The push for higher buildings is necessary so that high inner city land and development costs can be spread across more apartments. Adding storeys is one approach to achieving commercial returns. Sacrificing quality is another, an approach apparently adopted for a number of projects in the past. While that may suit a transient inner city population, it does little for the quality of urban design and may well contribute to social problems in the long term.

Can boomers give apartments a lift?
Another way forward if intensification is the objective might be to produce apartments that appeal to more mature households, and simply leave Gen Y to their own devices (not a happy prospect).   Apparently there has been a surge in demand for apartment living among older people in Brisbane. But, they are looking for well-appointed three-bedroom apartments where they can sustain – and afford – a lifestyle similar to the one they are used to. Given the economics of apartment development it’s difficult to see a similar standard and style in Auckland being affordable among those ageing boomers who might favour inner city living.

Not great. Members of the boomer demographic in Auckland are suburban dwellers, used to space and privacy. Retirement villages offer a suburban alternative that does not require their withdrawal from the communities where they currently live if they choose to trade down. They still receive the benefits of low maintenance and security while retaining access to a little space and privacy.

Congestion - the elephant in the apartment
That might be just as well because mindlessly boosting residential development on arterial roads promises simply to compound Auckland’s congestion problems.

We know higher densities are associated with higher congestion. Auckland’s geography means it already performs poorly on this count. The Tom Tom Congestion Index confirms this.

When the 2013 congestion index for 65 American and Australasian cities is plotted against population density (sourced from the Demographia website) Auckland sits among the worst performers – Vancouver, Sydney, Los Angeles, and San Francisco (Figure 2).
Figure 2: Population Density and Congestion 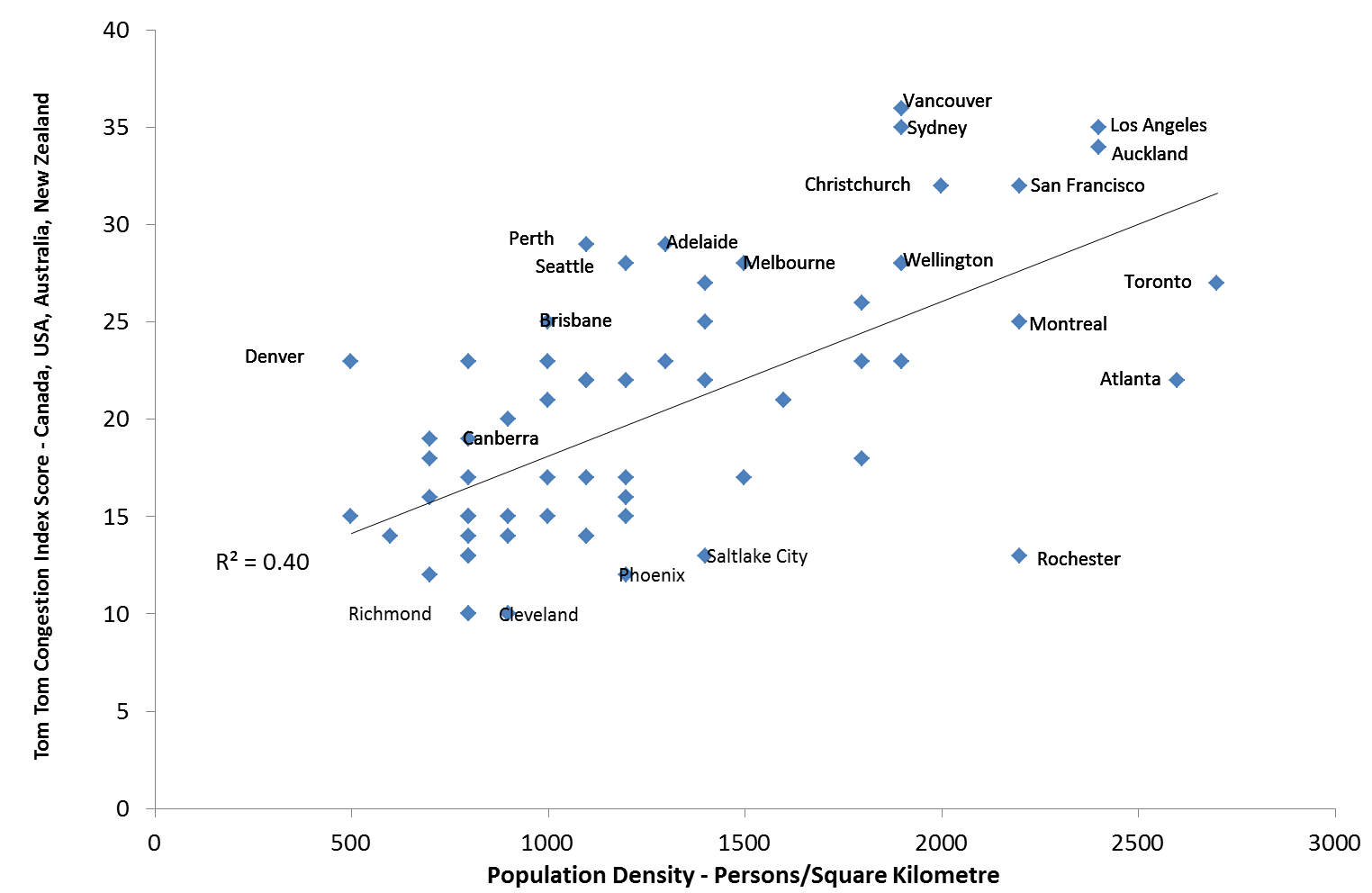 Inner city dwellers still use cars
Intensifying housing on arterial roads can only make that worse. While proponents of inner city living might cite a reduction in car use as a result of proximity to work and cafes to justify it, the reality is that people use cars for more than commuting and dining.

In 2013 inner city households owned over 10,000 cars (0.7 per household or 43/ha). Doubling or tripling the number of residents by promoting inner city apartments will lead to increasing congestion, especially when that takes place on arterial roads.


Given that households in the inner suburbs (the rest of the Isthmus) focus their travel on those roads and owned nearly 200,000 cars in 2013 (1.6/household and 14/ha), Auckland’s main arterials could well resemble parking lots rather than roads in the future.

Gilding the lily
This makes the before and after images in Figure 1 somewhat misleading given that there is no sign of additional activity in the second image despite the prospect that the North Apartments alone will house another 40 to 60 inhabitants.

This omission reminds me of a pitch for intensifying dwellings around arterial roads in Melbourne. The before and after images in Figure 3 were intended to illustrate how Australian cities might be transformed. Detached houses are replaced by continuous four to six storey apartments, all achieved, if we are to accept the rendering,  with no more people on the footpath, no more rubbish bins to sidestep, no more tram stops and no more cars .
Figure 3: Half a transformation: packed apartments, quiet street 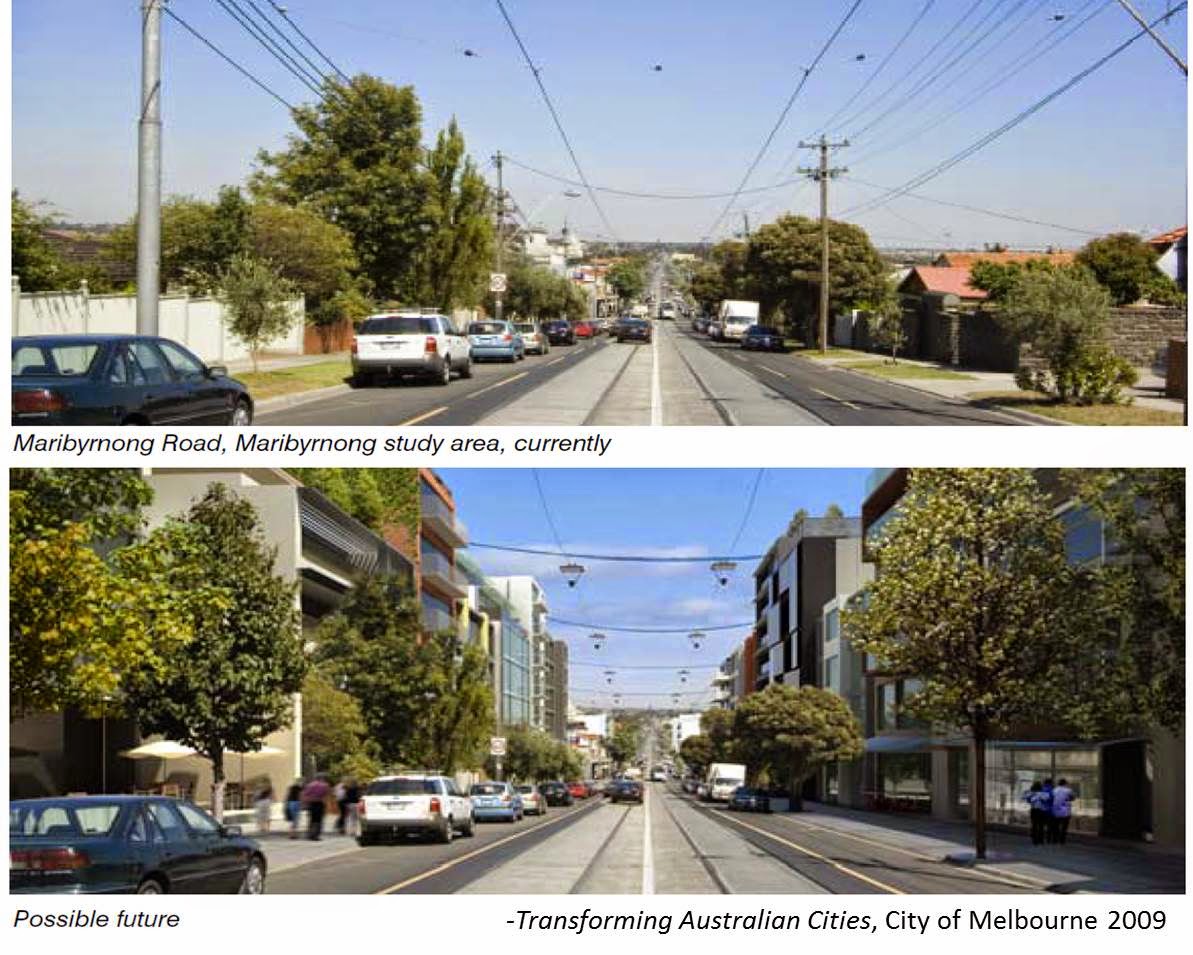 Oh that it were so easy: that with the stroke of a pen and perhaps a little airbrushing planners could solve our housing problems and retain a pleasant, uncongested inner city environment.

The reality is that it is hard to make apartment living work in the inner city, and short-sighted simply dumping it onto arterial roads.  Unthinkingly reaching for the sky is a risky response to the need for more housing, especially affordable housing. A lot more thought needs to go into this particular planning tool before it is applied in such a cavalier manner.

[1] The CBD and “outer central city” as defined in my previous post
[2] This estimate is based on the Statistics New Zealand age-specific Auckland population projections (2006 base). This groups 15 to 39 year olds together, a group projected to account for 27% of growth from 2016 to 2031, compared with 61% among the over 40s.
Posted by Phil McDermott