Urban fingers in the rural pie

Planning by cliché
It’s been said – by people with some influence in these matters – that without drawing Auckland’s city’s boundaries to include much of the surrounding rural hinterland “we would have urban development from here to the horizon”.
Talk about planning by cliché!  For various reasons – like landforms, demand, and dollars – the proposition is nonsense.  Auckland’s hinterland is just too vast, too difficult to develop over much of it, and too remote.
But as a result of recent reforms we have ended up with a metropolitan area that in spatial terms is predominantly rural.  The urban area covers just 10% of the newly configured city!  Where is the sense in that?  How do we prepare a spatial plan that will create better urban outcomes when 90% of that plan will cover rural areas.
Has urban planning helped Auckland’s countryside in the past?
And where does the presumption that urban planning (and planners) might better preserve the natural and productive values of the countryside come from?  Because it doesn’t reconcile with what has happened around Auckland.  In fact, planning for the region over recent decades has seen the spread of insidious low density settlement take over large areas beyond the urban boundary.
Look below at some of the results of provisions made for rural living north of Auckland.  Is this extravagant rural sprawl the best that urban planners can deliver for the countryside? 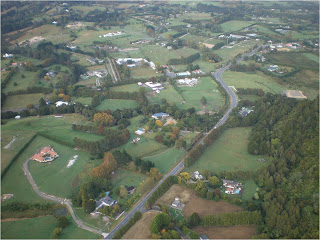 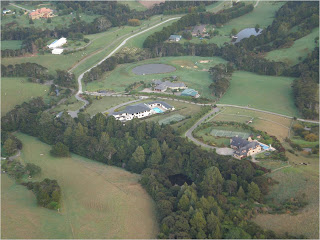 When in doubt, leave it out

A more reasoned option in the reform of Auckland’s governance would have been to incorporate land required for urbanisation over the next fifty years within the city’s boundaries, and leave the rest out.  Generous allowance could be made for green space, town belts, city parks, and future growth within such boundaries.
The result may have been a better physical environment within the city.  At least the urban planners would have had to confront the benefits and challenge of creating and managing extensive green areas within the urban boundaries, rather than relying on simply adding in more rural land on the distant edges.
This approach – aligning city boundaries with current and future urban land needs – makes sense in terms of both governance and planning.  Uncertainty is removed.  Long-term plans for infrastructure and land use can be made.  There is no need to rely on arbitrary urban limits unrelated to governance and decision-making structures to manage urban growth.
And, if the boundaries for the urban area were drawn to reflect urban needs and prospects rural communities and their representatives could get on with planning and managing rural areas.
Drawing the rural line
There are some good reasons for this approach.  Urban and rural growth issues are quite different, even between neighbours.  Their contrasting production systems make different demands on resources.  Transport needs and behaviours differ.  Settlement forms differ.  Infrastructure needs differ.  Resource management issues differ.  Even planning methods might vary, with a history of collaboration in resource management in the countryside that is rarely matched in urban areas.
Perhaps more telling, the values and aspirations of urban and rural communities differ.  They may overlap, but the choice to live in the countryside or small towns usually distinguishes people there from those who choose to live in cities and suburbs.
Admittedly, residential preferences cannot be satisfied on all occasions.  Some that would like to live in the city – or country -- cannot.
Also, preferences change with shifts in lifecycle and lifestyle.  Marriage and child-raising are events, for example, that alter how and where people want to live.  When adult children move out, their parents may move on as well.  Or, retirement may modify housing choices and preferences.  Such changes see increasing numbers of city folk look to the country to meet their needs and aspirations.
The pressure on rural environments will increase, especially close to cities.  Ways have to be found to accommodate this that reflect and enhance the character of the rural environment.  Rural councils will be better placed to do this than their urban counterparts with their particular views about the role and nature of the countryside and with their priorities firmly focused on urban matters.
Governing within bounds
Effective governance reflects and responds to diverse community values, occupations, and behaviours.  Ideally -- and democratically -- it will not unduly condition my choices simply to accommodate yours.  That’s why there is continuous tension in the quest for efficiency – defined in terms of resource use – and effectiveness – defined in terms of outcomes communities want.
And this tension is particularly evident in the debate over where boundaries between jurisdictions should lie.  In Auckland, the recent reforms saw distinctive communities rolled together within a single city, and the metropolitan influence stretched arbitrarily over a large rural hinterland.  The functional grounds for this are as shaky as the presumption that urban planning will work in rural areas, or that without it our rural hinterlands will succumb to rampant urbanisation.
The Challenge
Is the decision to incorporate large rural tracts into Auckland City going to lead to more effective planning for rural communities or the natural environment?  Or is it simply a way of reducing the number of employees in local government ?  Has effectiveness been sacrificed in the interest of a one size fits all view of efficiency because the reformers did not trust rural councils to know their own communities, community aspirations, and local needs?
And are Auckland's governors likely to be distracted by rural matters from the challenges of effective urban development?  Did the reformers lose sight of their aim for better metropolitan performance, something that needs more not less focused governance?
I guess time will tell.  But there may be shifts in thinking required to minimise the fallout from digging the urban fingers into the rural pie.  More on that later.
Posted by Phil McDermott No comments: Links to this post

Posted by Phil McDermott No comments: Links to this post

If the CBD is dying, will rail save it?

I’m still thinking about it.  But preserving – or restoring – the past is only likely to be justified in terms of respecting our heritage, not in terms of shaping the future. Pumping more commuters into the CBD seems to be a high risk approach to an area undergoing another interesting if still largely unpredictable transformation.


[1]      For those interested, the following Census Area Units make up my version of Central Auckland: Harbourside, Auckland Central East and Auckland Central West .  Freemans Bay Newton, Grafton West and Grafton East make up the Outer CBD.  There are interesting differences between the Inner and Outer CBD which I may go into another time.

[1]               Sure, it was a long time ago.  But the SAME issues keep turning up.  The results were published in 1982 by Cambridge University Press in McDermott P and Taylor M Industrial Organisation and Location.
Posted by Phil McDermott No comments: Links to this post

Are we being a bit dense about productivity?

Perhaps we need to revisit the notion I advanced to the Metropolitan Auckland in 2006 - let's lift our sights and consider the economic potential of the northern North Island, and begin to think about connectivity and opportunity on a wider canvas.
And shakier
The evidence regarding “productivity premia” in some places rather than others appears just too weak to support land use policies designed to enforce higher densities or to justify lifting urban densities as a rationale for transport investment.
Daniel Graham is quite explicit on this matter in subsequent studies:
A key conclusion is that we are unable to distinguish agglomeration effects from other potential explanations for productivity increases, most notably functional heterogeneity.  Consequently, the agglomeration effects of transport investments cannot be interpreted causally.  [4]
Digging into heterogeneity – the occupational dimension
Heterogeneity- - a fancy word for diversity – almost inevitably overwhelms any econometric attempt to measure a relationship as weak as that between density and productivity.  The analysts try to control for the sector a firm is in, but that still hides a whole heap of heterogeneity.
Sectors are not the only things that vary between places.  Occupational mix is critical, for example.  The 2006 New Zealand Census showed that 19% of employment in Auckland region fell into the category “Legislators, Administrators, and Managers” compared with only 14% in the rest of New Zealand and 21% in the CBD.  Another high value category, Professionals, made up 18% of Auckland’s employees, 25% in the CBD, but only 15% in the rest of New Zealand.  Similarly, Technicians and Associate Professionals made up 19% of employees in the CBD, 15% in the region, but only 12% in the rest of New Zealand.
Jointly these high value added occupations make up 66% of Auckland’s CBD workforce, 50% across the rest of the region, and 42% across the remainder of New Zealand.  Such pronounced labour market stratification will account for differences in value added per worker even within firms and sectors.
Conclusion –make it easier to do business to make Auckland grow
Quite simply, the higher order, management, control, and negotiation jobs tend to end up in big centres.  This facilitates a range of local, national, and international transactions that they are associated with.  The challenge for planners is to make it easier, though, and not harder for them to locate in the region.  Imposing congestion and over-the-top infrastructure costs associated with promoting a high density city might just have the opposite effect, discouraging local investment and employment.
The benefits that firms might be looking for by heading to the principal commercial centre in a region or nation can be delivered by the quality of transport and communication links for the conduct of business, and the quality and cost of living to sustain a healthy labour market.  But if we make it too hard for them to locate at a suitable site in Auckland – whether or not that is in the CBD – the continuous improvements in transport, mobility and communications that we are witnessing today might just make it easier for them to leave or bypass the region.