Agglomeration - diverting attention from the basics

A bit more on agglomeration economies
In my last posting I pointed out that the advantages of business concentration are not evident in the relative performance of Auckland in New Zealand or Sydney in Australia.  Even if agglomeration economies benefit individual firms or sectors, they are not being translated into superior regional growth.
Of course this could be a measurement problem.  Perhaps productivity gains in the major cities are such that they achieve superior output growth even as employment performance falls behind smaller centres.
And of course, the gross figures used hide the "composition effect": history means cities are made up of different mixes of business.  Cities with an abundance of growth industries do better than those with too many sunset industries. In this way cities go through cycles of growth, stagnation, and decline just like products or firms.  Maybe agglomeration economies exist but Auckland happens to have an “inferior” mix of activities compared with the rest of New Zealand or metropolitan Australia.
Sounding a Warning
So I have done some more analysis, summarised below.  Because it is little dense – and most of this stuff on agglomeration is – here is a summary of my conclusions.
There is no evidence at all that business sectors have been advantaged by being concentrated in Auckland over the past decade (whether or not individual firms are).  In fact, there may be a (weak) tendency for location here to be a disadvantage: growth prospects might be better for the less concentrated sectors and for activities located outside Auckland.
This raises questions over policies promoting business concentration in Auckland, especially policies that presume higher land use densities will generate higher productivity and therefore growth.
A focus on such policies may have deflected attention from the basics: the cost of doing business in Auckland, its attractiveness to investment, and its attractiveness to skilled people.  It means we may have underplayed the diseconomies of agglomeration, the environmental, social and economic costs associated with boosting densities on ageing infrastructure, for example.  These arise from congested and costly services prone to disruption (including but not limited to transport), inefficient labour markets (because of the commuting distances and housing costs, for example), and overpriced land. These may be he areas most in need of policy attention.
Agglomeration economies offer Auckland no silver bullet. Rather, such things as the quality of labour, the quality of services and infrastructure, the quality of investment, and the quality of life all require at once a more responsible, responsive, and perhaps light-handed approach for Auckland to prosper.
Data on individual sectors
I have explored whether agglomeration in Auckland has conferred advantages on business by examining whether individual business sectors concentrated in the region (1) do better than other sectors less concentrated there and (2) do better there than the same sectors elsewhere in New Zealand.
For this I analysed employment data (from the Statistics New Zealand website) for sectors defined at the four digit level of the New Zealand and Australian Standard Industrial Classification. I looked at the years 2000 to 2007 (a period of sustained growth) and 2007 to 2010 (a period of employment decline).  Primary sectors (agriculture, forestry, fishing, and mining) were omitted as they are not urban activities. Sectors with fewer than 200 employees in Auckland in 2010 were also omitted.[1]
For each of the remaining 168 sectors I calculated a score known as the “Location Quotient” (or LQ) indicating how heavily they were concentrated in Auckland in 2000, and another for 2007.  A LQ of 1.0 means that the share of a sector in Auckland is the same as the region’s share of all New Zealand’s economic activity (measured as employment).  Anything over 1.0 means the sector is concentrated in the region.  Anything less than 1.0 means it is under-represented.
The proposition
If a sector is concentrated in Auckland relative to the rest of the country this suggests that firms in the region should reap economic benefits from shared services, skills, supplies, and information. Consequently, these sectors should outperform other sectors in Auckland that are less concentrated and, more importantly, should do better in Auckland than elsewhere in the country.
Put simply, we would expect a high LQ to be associated with faster growth rates in the city.

The big picture
To explore this proposition the 168 sectors are plotted on two axes in the following diagram. The horizontal axis measures their concentration in 2000 (increasing from left to right).  Anything with a LQ of more than around 1.3 can be considered significantly concentrated in Auckland.  58 sectors fell into this category, and another 30 had some degree of concentration (a LQ between 1.1 and 1.3).

The vertical axis measures their employment performance relative to the rest of New Zealand.  The higher the score, the better the sector performed in Auckland compared with the same sector outside the region. 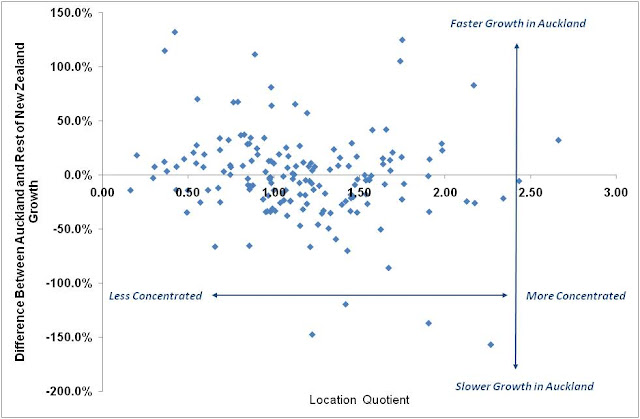 Note: Relative growth is Auckland employment growth rate minus rest of New Zealand employment growth rate
Proving the existence of agglomeration economies has become a major past-time for academics and policy analysts.  It’s all pretty arcane stuff.  Even the simple enough analysis outlined here contains limits and qualifications.
But the results raise serious doubts over the value of policies that rely on the benefits of agglomeration to boost growth.  Or, worse, policies that manipulate land use to increase employment densities in the belief that this will somehow advantage businesses. These results, at least, suggest that at best such policies have no effect and at worst could disadvantage the region’s economy.

It may well be time to address the fundamentals about what makes a city an attractive place to invest and live in over and above aspirations to be the best simply by being the biggest.