Amalgamation and Streamlining City Governance: the Auckland Experiment So Far

The performance of the Super City – so far, so so
Previous posts indicate that amalgamating local government in Auckland has not yielded efficiencies. Catch-up spending may account for some of the costs, which have run well ahead of population growth, and the consolidated Council may be doing more things than its predecessors.
However, a failure to deliver on expectations suggests that performance is still a problem. This blog looks at the governance structures underpinning Auckland Council’s decision-making, concluding that amalgamation has simply changed governance problems, not resolved them.


Governance: councillors acting with authority
Authority for governing locally comes from the democratic process. Elected politicians are expected to represent the preferences of constituents in decision-making (which does not reduce the imperative to act within the law, consider sound technical advice, and evaluate the costs, benefits, and risks of alternative courses of action).
Implementing decisions falls to a chief executive appointed by and accountable to the Council. The CEO in turn appoints subordinate managers to implement policies. While the executive team is also required to advise on the decisions the Council takes, staff are not the Council. The Council is an elected body that ultimately speaks and acts collectively.[1]
Boards and managers
Council and staff roles have a parallel in corporate boards of directors and company executives.  Despite different conventions, similar principles apply. For example:
·        Effective engagement is required between council and constituents so that decisions take account of residents’ and ratepayers’ interests;


·        Accountability comes from clarity and openness so that the grounds, costs, and expected outcomes of decisions can be understood by constituents;


·        Clarity of communication and accountability between Mayor and CEO is critical to turning policy decisions into executive actions.
How many around the table?

The effectiveness of governing bodies in the private, not-for-profit, and public organisations is influenced by the size of the governance group. While this is a matter of ongoing professional and academic debate and  deliberation, it is generally agreed that 10 members should be sufficient to bring the necessary breadth of views and skills to the table while avoiding the distractions associated with larger boards.  Councils may have more than ten members, however, or use outside advisors to ensure that the full range of community views are brought to individual issues.[2]
Managing complexity: committees and council-controlled organisations
Councils work in diverse task environments. Traditionally complexity is managed through specialised committees reporting to the full council, which makes decisions based on their recommendations.
Using Council Controlled Organisations to deliver selected public goods and services is another way to deal with complexity. CCOs are governed by appointees, often with business experience, rather than elected representatives.  While operating to a charter framed by the council, they can act outside the confines of the public service.
Auckland’s CCOs – a mixed blessing?

An earlier post suggested that higher costs may be associated with Auckland Council’s reliance on CCOs. Table 1 lists them, including statements of purpose (from annual reports). These indicate changing roles, raising questions around mission creep and how and why council-mandated charters may be altered.
For example, ATEED positions itself as multi-functional, moving closer to the Council’s environmental management and infrastructure responsibilities, while committing to a whole-of-labour market quality focus.
The Auckland Transport statement suggests a shift from supporting changing land use through transport investment and public transport operations to urban planning (“shaping Auckland”) and shaping transport behaviour. 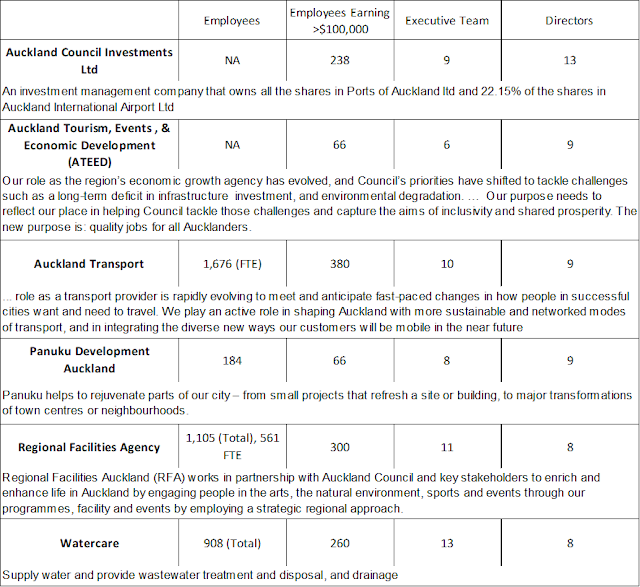 Tails wagging the dog?
It may be inevitable that CCO roles evolve as demographic and economic conditions change. It is also important that those changes reflect rather than lead council policy. (However, CCO directors and officers do have a role to play in advising the Council in their respective areas of expertise.)

Auckland City is now running into hard questions over the CCO model. In the spotlight at the moment, for example,  is the Regional Facilities Agency and the initiatives it is pursuing to “rationalise” long-established sporting venues.
Another example is the failure of Panuku Development to align development planning with council plans.  It’s also problematic when a subsidiary pursues commercial objectives contrary to the wishes of the community, as when Ports of Auckland published expansion plans into the Waitemata Harbour. Similarly,  the subsidiary’s “out-of-scope” commercially-founded plans for a hotel and car park clash with Council’s plans for the waterfront.
Issues of autonomy, accountability, and conflict can reduce the value of CCOs and subsidiaries as they are directed by boards a step removed from democratic responsibilities and managed by executives not directly accountable to the Auckland Council CEO.
Local boards: compensating for a reduction in representation?
Local democracy depends on local representation. Amalgamation was in large part about reducing the number of councillors, from around 117 across eight councils in 2009 to 21 today (Table 2). This saw one council member for every 14,500 people in 2009 fall to one for every 64,600 in 2018, a 78% reduction in representation.
There was a slight increase in local board members (25% up compared with community boards in 2009), but given boards' limited responsiblities, the overall reduction in representation and consolidation of regional rather than local governance suggests a significant decline in democratic accountability. The increase in appointed directors of regional-scale CCOs[3] can be seen as contributing further to  the centralisation of decision-making.
Table 2: Local Government Representation, Auckland 209 and 2018

Insofar as participation in elections reflects it, consolidating Auckland did little for elector engagement. Residential turnout for council elections in 2016 was 38%, exactly the same as in 2007.


Local Boards, Local Representation?
It is unlikely that the powers delegated to local boards are sufficient to offset the loss of representation. Although the numbers of elected members of the individual boards lie within a reasonable range for organisational effectiveness (Figure 2, below), the spread of representation (defined as residents per councillor) varies substantially among them, well above the +/- 10% considered appropriate for electoral equity.
Putting aside the exceptions of Waiheke and Great Barrier islands with their small populations, the highest level of representation is 7,400 persons per board member, well ahead of the lowest at 17,000 (the average being 10,800).
Figure 1: Representation on Local Boards 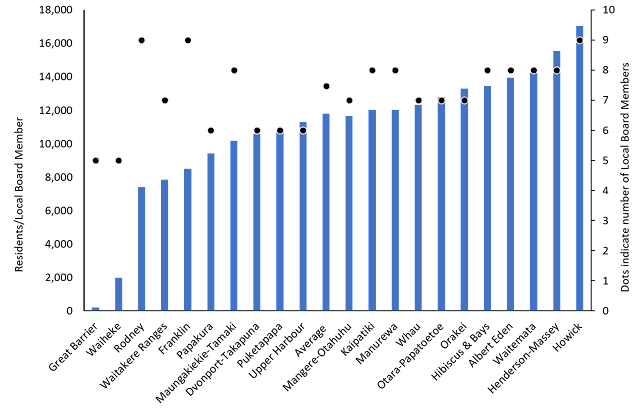 Given its size, Auckland Council has the potential to be compromised by unwieldy numbers and the cross-currents and mixed agendas that attend a crowded governance table. The committee structure is unlikely to offset this because, in a rather strange arangement, all councillors are members of the three main committees (Table 3).  Over-sizing committees reduces the advantages of having small groups specialise in key areas before deliberation on policy options by the full Council.
Table 3: Auckland Council Committees


Time to review Auckland’s governance arrangements?
The outline of governance here suggests that the Auckland Council has the potential for cumbersome decision-making despite any streamlining intended from consolidation of powers.
For example:
·        The Council operates in a top-heavy manner, if only because its key decision-making functions are subject to deliberation by committees of 22;
·        The relationships among the governors (councillors, CCO directors and board members) and managers are potentially complex and communications constrained across boundaries;
·        Representation within the council is based on low elector turnout, while representation across local boards is uneven.
Given the evidence of rapidly rising costs in Auckland Council’s first eight years, the picture of consolidated power at the centre without obvious democracy, decision-making, or performance benefits suggests that it is time to again review Auckland’s governance arrangements.

[1]            Note to reporters: it is important for clarity to use a singular verb when reporting on the Council. The Council are not to blame for getting it right or wrong: the Council is.
[2]           The Independent Māori  Statutory Board pays an important role in this respect in Auckland.
[3]            The Royal Commission on Auckland Governance (2009) claimed “over 40” CCOs associated with local councils in 2009 (Final report, p.13). This implies a trade-off through amalgamation between many small organisations operating locally and a few large ones operating regionally.
Posted by Phil McDermott