Reviewing the Auckland experiment
This is the fourth post reviewing the progress of Auckland Council following the amalgamation in 2010 of seven territorial and one regional authority and the reorganisation of transport and water delivery agencies. The aims included greater regulatory consistency across the region, the capacity to make adequate, coordinated provision for growth, and cost savings.


Despite the jump in costs and funding, we can’t label the Auckland Experiment a failure on the evidence so far.  So this post adds to the analysis by looking briefly at performance, albeit in general terms. It looks at broad efficiency trends by comparing Auckland with New Zealand’s other regions. These include unitary councils (regional and local functions combined) and multi-council regions.
But first a couple of scene-setters.  What is the role of councils? And how might efficiencies arise from amalgamation and operating at a larger scale?
Skip these two boxes if you just want to look at the numbers.
Scene Setter 1 - What councils do (or should do)
There are good arguments for local councils to oversee the provision of local public goods where the market won’t deliver or where there are natural monopolies. It is also appropriate for them to levy rates over property to do so, and to charge directly for the services they provide.
Obviously council roles will change as shifts in technology or behaviour create competition where none existed before (and they consequently pull out of infrastructure or service delivery) or where the public appetite for amenities changes (for example from passive to active reserves).
It is important, though, that property rates relate to the infrastructure provided, and that charges for services relate to the fair cost of their production.  It is also important that councils produce infrastructure and services efficiently. Unduly high costs penalise residents and businesses, reducing a city’s competitiveness and attraction.
Councils also have an obligation to continuously review and evaluate what infrastructure and amenities should be provided, where, and when. In this they are required to reflect on constituents’ needs and preferences, engaging with the community through survey, consultation, submissions, and, ultimately, the ballot box. This is necessary to legitimise new activities and allow cross-subsidies between services, areas, or generations.
Discretionary council decisions should also: be legal, reasonable (both matters that may be contested in the courts), and should not unduly lower efficiency.

Scene Setter 2        Potential efficiencies from reorganisation
There are the three ways by which efficiency might be improved through local government consolidation and reform:
Administrative gains: from lowering administrative, compliance, transaction, and regulatory costs.  Processes may be streamlined, duplication eliminated, best practices implemented, and economies of scale gained (increasing what is achieved by more than what it costs).
Technical gains through improved financial capacity to invest in new systems, processes, and plant to lift output, enhance outcomes, reduce service failures, and lower costs.
Allocative gains from delivering the most appropriate mix of goods and services, and making effective use of capital to best deploy people and plant to achieve desired outcomes.

Measuring gains
In this post, I consider the efficiencies in Auckland Council that should come from administrative and technical advances using changes in two measures: the number of local government employees and operating expenditure per head of population.

Auckland Council numbers are compared with numbers for all New Zealand regions from 2000 to 2018. Following the logic justifying amalgamation, the creation of Auckland’s large unitary council in 2010 should have increased the residents served relative to council employment numbers and lowered costs to residents more than in regions with smaller, multiple councils.  And within Auckland we would expect council costs to decline relative to population.
The indicators used assume that the council output is a function of population. This is a high order assumption, over-riding differences in the mix and quality of amenities and services and differences in the physical environment of regions.  Equally, employee numbers is also only an approximate measure of inputs.
While these assumptions keep analysis simple, they also limit the conclusions that can be drawn.
Employment up, productivity down?
We know employment growth has been modest within the enlarged Auckland Council, confined to Council Controlled Organisations. However, the costs of council employment have risen significantly, in part through staff movement into higher-paid bands.
To consider the bigger picture, the number of residents in each of the 16 regions was divided by the number of people employed in local government administration and in water supply, sewage and drainage servcies (sourced from Business Demography, Statistics NZ). The higher the figure, the more productive a region is (fewer employees relative to residents).  The line should rise if productivity is improving.

The results for Auckland and the median for all regions have been plotted in Figure 1. Auckland stands out as more productive than most regions, but contrary to expectations, more so before the 2010 reforms than after.  Other strong performers are smaller regions with unitary councils (Gisborne, Nelson, and especially Tasman).
Figure 1: Residents per Council Employee, 2000-2018 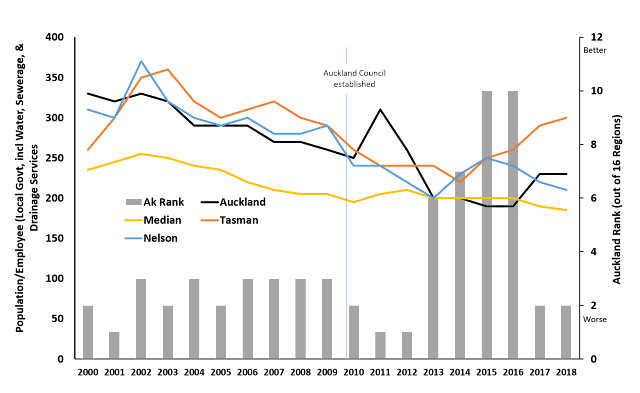 The downward slope indicates more employees relative to population, suggesting falling productivity. Of course, this may indicate changes in the scope of council activities, but it is hard to envisage a shift that would lead to a 26% fall in 8 years (as in Auckland) or even a 14% fall (as in the national median). And if costs rise faster than output, regional (and national) productivity suffers.


While Auckland ranks well against other regions on this measure (see the bar graph and right-hand scale), its steep downward slope and convergence on the median across regions is inconsistent with expectations of economic gains from consolidation (despite the recovery in 2017).

Expenditure: more for less?
Operating expenses (sourced from Statistics NZ) have been summed for councils in each region from 2000 to 2017, converted to 2018 dollars and divided through by regional populations.  In theory, expenditure per head should fall as councils become more efficient, and should be lower in larger councils, Auckland being the obvious example (see the Scene Setter 2, above).

Well, neither expectation appears to hold. Operating costs per employee have been increasing.  In Auckland there was some moderation after 2012 but it is difficult to distinguish its performance from the median for all councils in Figure 2.

Figure 2 also includes high and low performers.  The best performing regions fall below the lower quartile and the worst above the higher quartile.  The single best performer recently has been the Hawke's Bay with its population concentrated in the twin cities of Napier and Hastings. The worst has been the West Coast with its sparse population spread over a physically challenging area.
The key observation, though, is that efficiency as measured here has not improved in Auckland which continues to sit around the middle of the pack. 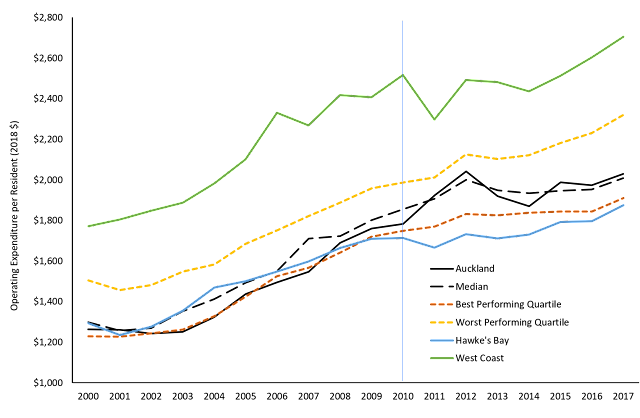 What can we conclude?


On the measures used here, local government costs are moving ahead of population growth in most regions. Auckland is no exception. At best, te city has maintained efficiency in line with other regions. Consolidation of Auckland's councils has not been enough to reverse a decline.

As noted, these measures of efficiency assume a similar mix and level of services delivered by the consolidated council as delivered under similar conditions by councils in other regions, and as delivered by the previous Auckland councils. At the level this analysis, our most robust conclusion is that the measures used provide no evidence that consolidation has lifted Auckland's game. To date, the costs of consolidation have not yielded obvous benefits.
Exploring why means looking into allocative efficiency: is the additional funding Auckland Council is receiving being allocated to investments that lift productivity as they deliver better services? In the absence of evidence of better performance the consolidated council does not hyet yet appear to be on the path to savings. And if Auckland is going to deliver on the promise of 2010, can we afford the spending evidently required to get there?

However, it is timely to note that a recent internal report regarding decision-making for cycleway investment by Auckland Transport identifies that spending was justified by over-estimating demand.  This is on top of major under-estimates of the cost of the Central Rail Link which was justified on the basis of a $2.3bn budget in 2011 (and a series of assumptions that were hardly grounded in reality). That budget  had (predictably) blown out to $3.4bn by  2016, and continues to climb, with no clarity on where it will end up.
These examples confirm how large organisations are prone to resource misallocation; the larger the project the more likely it is to blow out, and the bigger any over-run will be. The impact of failures in resource allocation decisions in a large council can be further-reaching than similar failures by smaller organisations, given the increased funds at their disposal. And placing a substantial share of the increased funds in CCOs at arm's length from the political process may be no remedy.  Poor spending decisions by councillors or their agents and advisors can lead to uneconomic investment: over- or under-capacity, in the wrong place, badly timed, or over-priced.  The end result? A drag on city efficiency and productivity.
[1] There is a difference.  Efficiency refers to how well tasks are done, and specified outcomes       achieved.  Productivity requires that those outcomes are the correct ones.