In brief ...
The last posting outlined rapid spending growth by Auckland Council since created by amalgamating seven units of local government and one regional council.  This post demonstrates that while rates increased only a little ahead of population growth, the boost in investment by the Council since it was created has been funded by growing charges for services and by borrowing. While the finances have been well-managed and debt remains reasonable, there is a question-mark over how long the rapid growth and cost of council activities can outpace the growth of the community and economy.

This raises a number of questions. The key question: at what point will excessive council spending begin to limit the growth it aims to cater for?


Auckland Council costs have gone up by around 26% over just six years by my estimate. Surely the ratepayers will be rebelling against that?


Well, not necessarily. Over the same period, rates collected only went up 17% (in 2018 dollars), or 2.6% per year, roughly in line with population growth of 15%.  (That’s not to say they didn’t go up by more in some areas as the Council sought to equalise them across the newly formed city [1]). 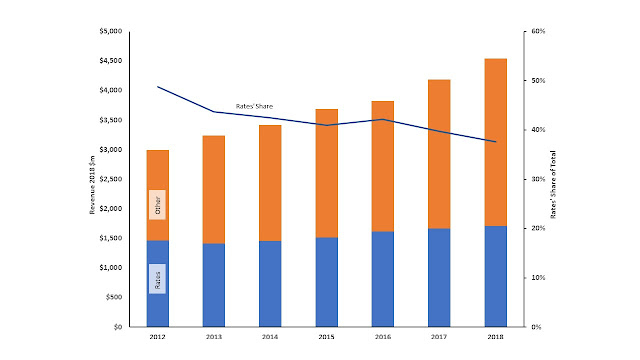 Citizens are paying in other ways

Charges for local services went up by 44%, or $385m. Most of this is also paid by residents, who have little choice when it comes to water and waste or transport charges.  At the same time, development and financial contributions went up $108m or 150%. While this reflects city growth (and maybe some catch-up from development delayed while the Council was trying to sort out where growth might go), these are paid for mainly by home buyers (especially first home buyers): current and future city ratepayers. 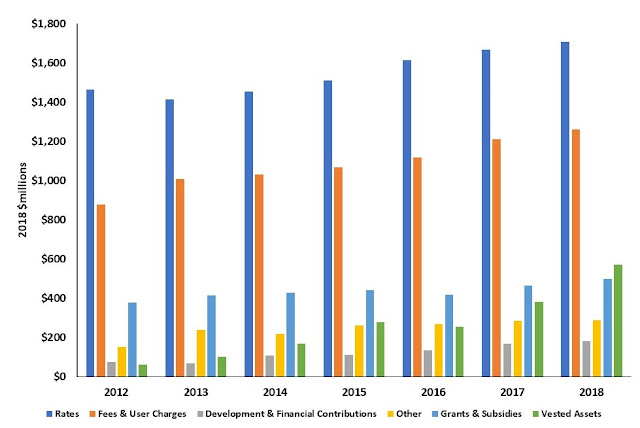 Interestingly, vested assets accounted for 33% of revenue growth reported and 13% of total revenue in 2018 ($510m), up from just 2% in 2012.  Roads, sewer and water pipes (and pumps), reserves and parks, and so forth are transferred to Council at “fair value”as development proceeds .  They are reflected in the balance sheet as a component of non-current assets.


Vested assets are ultimately funded from new property purchase (in addition to development fees, also passed on in property prices).


One way or another, residents pay.


Vested assets are also an ongoing liability given the commitment to maintain them and fund their depreciation.  It is critical that they are well-placed and of a standard that will carry them well into the future if rates are not to escalate indefinitely.


Lifting investment
The Council’s accounts tell a story of recent growth. To better understand how growth is funded, and sidestep accounting conventions which see, for example, expenditure reflected in a reduction in the value of assets and vested assets recorded as revenue, it is useful to look at cash flow figures (Figure 3). 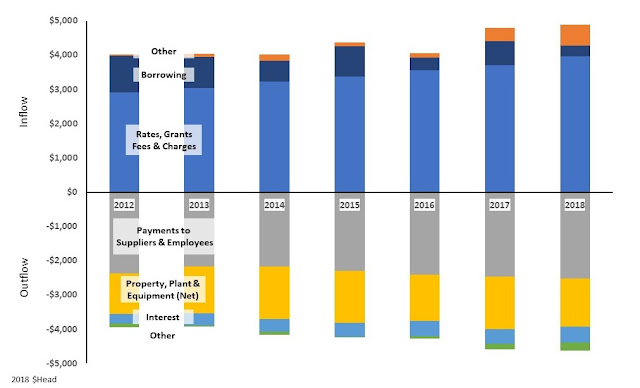 They indicate a 36% increase in revenue from rates, grants, fees, and charges between 2012 and 2018, supplemented by borrowings.  Annual borrowing declined significantly over the period, from 26% of cash in 2012 to only 6% in 2018. Presumably increased fees and charges have facilitated this, together with adoption of more diverse financial instruments, the latter reflected in the growth of the Other category (including dividends, interest, and $218m from the Crown in 2018).


Keeping the lid on – so far
At the same time, the ongoing business of the Council is reflected in just 6% growth in the costs of suppliers and employees, compared with 21% growth in investment.  The fastest growing costs have been interest payments, more than doubling, although at this stage they account for only 10% of total spending (Figure 3). Annual borrowings (net of repayments) have trended down. 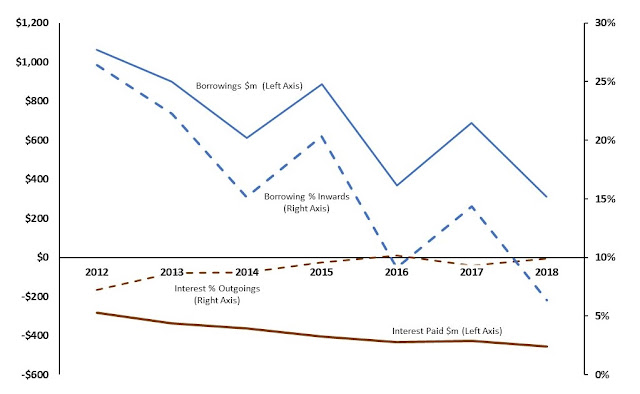 
One way of charting the value of debt is to plot it against GDP, with the expectation that any improvements in public infrastructure and services might be reflected in output some time later.  The time span considered and a lag in the availbality of regional GDP data limits such an assessment.  However, short-term movements offer no evidence of a productivity benefit yet. Comparing June council debt with regional GDP 21 months later (possible only from June 2011 for debt to the four years to March 2016 for GDP) shows a 62% increase in debt compared with a 20% increase in GDP .  As measured by Stats NZ, Auckland's GDP growth was strong, but not as strong as the growth in the Council’s indebtedness.
Where to from here?

The Council has kept the lid on its finances, despite the growth of debt, through moderately higher rates and sharply increased fees and charges.  This year it introduced even more ways to pay.  It is set to selectively tax income (on properties providing tourism accommodation) and mobility (levying road user charges over and above road costs which are already funded by the Government’s Road User Charges).
The Super City is delivering for the moment – at least in volume – but at what long-term cost? An appetite for increasing charges and growing debt to support rapid spending growth raises questions.  For example:


·        How much of the spending addresses the Council’s core business and how much is discretionary? And how is spending prioritised?


·       What is the quality of investment, both by the Council and by developers in new public infrastructure ? What are the long-term implications of the new wave of infrastructure for long-term spending on maintenance and funding depreciation?


·       What happens if population-based demand falls below expectations?  The high population projections justifying much of the current spending are by no means guaranteed.  If growth in resident numbers falls short, the surge in civic investment could stymie growth through the costs it imposes on households and businesses.


·      How well will current investments meet the expectations of future Aucklanders about how and where they will live, work, and play?.  Or, are we cementing current preferences into a future about which we have far-from-perfect knowledge?


·        At what point will residents and ratepayers resist rising monopolistic charges for public services? And how will such charges impact on the rest of the economy?


·        In what ways is council spending impacting on regional productivity and output?


It is only eight years since the Council was formed but if a rapid increase in council costs is placing growth at risk, it may be timely to revisit the question of how Auckland is, or should be, governed.