Auckland’s Super City and the Costs of Consolidation

Synopsis
This post sets out trends in the costs incurred by the Auckland Council over the past six years.  The Government created a single council plus subsidiaries model for the governance of the region in 2010.


The post starts with an update of the cost of employment growth in the new Council.  It then shows that under the new structure the rate of investment has been an even bigger driver of cost increases. Costs have clearly outstripped population growth, suggesting that the model adopted has not prevented the so-called super city from running into the diseconomies associated with excessive scale.


Early hopes – and risks
Problems reconciling regional infrastructure and environmental policy with local interests led to consolidation of one regional and seven territorial councils into a single “super city”.  Auckland Council was created in 2010 as a city of 1.44m people.  It was intended to reconcile competing territorial interests, rationalise public investment, align regulation and services, streamline processes, and achieve economies of scale. All this, it was believed , would make Auckland competitive on a world stage and lead to a “more liveable” city.
I questioned whether the reorganisation would achieve efficiencies, or simply lead to diminishing returns from increased organisational size and complexity. With eight years of the super Council behind us, we can consider how well it has worked. In this post, I consider cost performance.


But first, does bigger mean better?
(Skip this section if you just want to see the numbers).
Auckland’s consolidation was based on the premise that a bigger organisation would be better for a growing city.  But there are flaws in that assumption.


As organisations grow beyond an optimum size, returns to scale fall and even reverse as efficiencies become outweighed by the shortcomings – the diseconomies -- of oversizing. Large producers and service providers may be impeded by ageing technology and legacy products and services, becoming vulnerable to competition from new entrants and innovators. Top-heavy management, entrenched processes and behaviours, structural and social complexity slow organisations’ responses to changing circumstances. Investment and operating practices become erratic as internal units pursue their interests without regard to the goals of the wider organisation or as they compete for internal resources.
We have seen organisational failures from excessive scale in manufacturing, aviation, construction, retailing, computing, IT, financial services, and others. Some large organisations may avoid collapse by transforming themselves into smaller units, a painful and not always successful process.  Others may be taken over, absorbed, or simply closed.  A few get bailed out.


Large cities can also fail, when advantages of agglomeration are offset by increasing costs.  Businesses may suffer from the constraints of ageing and under-capacity infrastructure, increasing service charges, and rising land costs. Congestion and high house prices impact on employment costs and reduce a city’s attraction to new and existing households, leading to skill shortages.
Diminishing returns also apply to city councils.  And when large councils fall short, ratepayers pay. This may well be the case for Auckland if the Council’s costs run too far ahead of population growth.


The data
The figures used to explore Auckland Council’s costs are from annual reports.  Group costs are divided between the “core Council” and its subsidiaries[1]. The analysis is indicative, based on aggregate cost movements. All amounts are adjusted to 2018 dollars using the CPI.
An update on employment – onward and upward
My last post documented Council employment growth, especially in higher income brackets, from 2012 to 2017.[2]  The Annual Report to June 2018 is now available.  Here’s what happened:


It appears that council-controlled organisations are a Trojan horse –a vehicle for employment and salary growth a step removed from political control (Figure 1).  In 2013 they accounted for 33% of the Group workforce.  Today, they account for 40%, and for 47% of employees earning between $100,000 and $200,000, and for 82% of those earning over $200,000.  Subsidiaries and CCOs jointly accounted for 74% of the growth in Group employment costs. 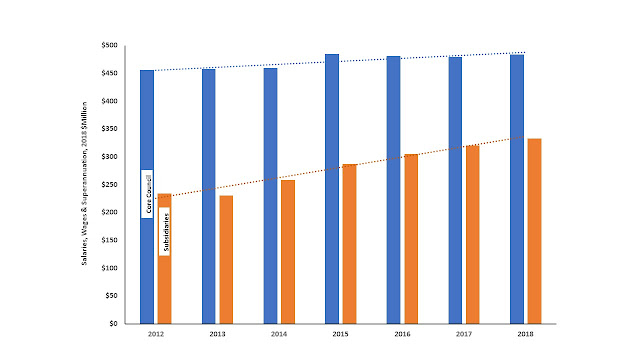 This cementing in of high-end salaries reinforces my view that super City performance is likely to be impeded by the growth of a tier of management committed to keeping the organisation going as much as to achieving its community objectives.


More people and higher salaries cement in higher costs.  But just how much do they contribute to an overall increase in council costs?  This rest of this post looks at what is happening to other council costs.
Costs: the bigger picture
Group operating expenditure grew 26% in real term from 2012 to 2018 (over $800m), ahead of the 24% increase in employment costs.  The biggest boost came from depreciation and amortisation[4], up almost $200m (30%). Nearly 70% of this was attributable to subsidiaries and CCOs (Figure 2). 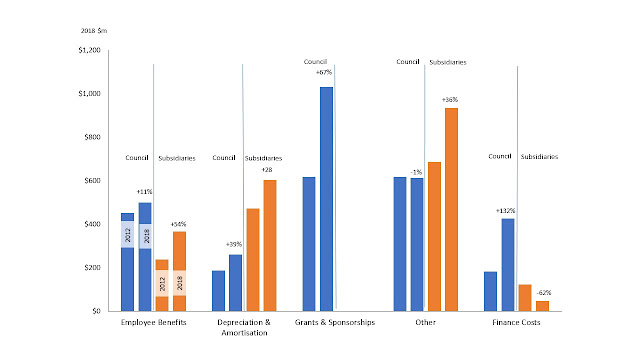 The growth of depreciation reflects an increase of over $11bn in the Council’s property, plant and equipment portfolio (up 32%) from 2012 to 2018. A rapid increase in tangible assets is also reflected in repairs and maintenance spending (20% of the “Other” category in Figure 2), with annual costs up by 46%  ($84m) from 2012 to 2018 (Figure 3).
Figure 3: Tangible Asset Values and Costs 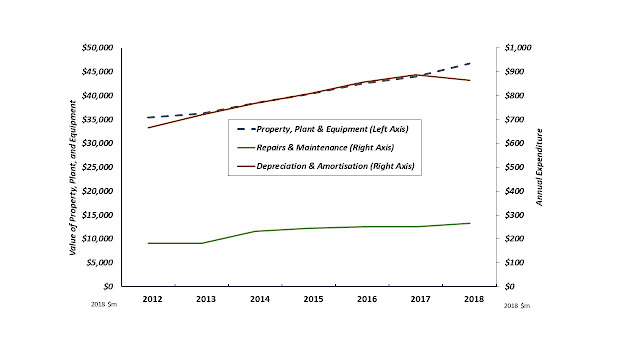 A high level of investment commits the Council to substantial long-term costs. This is also the case with respect to property expenses, apparently responding to increased employment or newer, better-appointed offices to reflect the increasing salaries being paid: utilities, occupancy, rental and lease costs climbed by 79% ($69m).
In contrast, the largest category of Other spending, on goods and services, grew by just
10% (still up by $68m over six years, to $723m in 2018).  Only consultancy and professional services declined, by one third to $140m.[5]


Subsidiaries and CCOs grew more rapidly than the core Council in all categories other than finance costs. This presumably reflects the role of the core in funding increased civic investment and activity through its CCOs.
Internal Transfers
This funding role is also evident in core Council spending on grants, subsidies, and sponsorships (GSS).  While the detail of transfers is not provided in the City’s annual reports, a large share are made to CCO investment and operations. Core Council expenditure on GSS grew by 65% from $623m in 2012 to $1,030 in 2018, 54% of the total increase in core Council costs over the period.


The 2018 annual report identifies that around 88% of these payments went to the CCOs in 2017 and 2018, with Auckland Transport the principle recipient.


Conclusions and questions
Two obvious conclusions can be taken from this brief analysis:
·        Council costs are ramping up ahead of population growth, primarily through commitment to a substantial investment programme over the past six years, backed by an increasingly expensive if not expansive workforce.


·        Reliance on a CCO model in the consolidated council has been central to the increase in employment, investment, and related costs. In 2018 CCOs and subsidiaries account for 70% of council investment in property, plant and equipment ($32.7bn).
In light of these conclusions, it is interesting that the Royal Commission on Auckland Governance put budgeted operating costs across eight councils in 2008-09 at close to $2b and capital investment at $1.25bn.[6] In 2018 dollars this is around $2,600/head of population. It compares with $4,580/head in 2018, a 76% increase in just ten years!


Given these observations, determining the efficiency and effectiveness of the Council's increased spending clearly requires analysis of the individual CCO accounts. A number of questions need addressing, among them:
·        Does the spectacular growth in council costs result from a prior failure to meet the city’s needs? Does it reflect a fundamental change in the direction and scope of council activity? Or has the organisation simply over-stepped the threshold of efficiency?


·        Do the CCOs enhance the effectiveness of the Council, and local democracy? Or are they reducing the accountability of the Council at the same time as it increases the scope, scale, and quality of its investment?


·        Is a governance model that focuses on functional specialisation at a regional level rather than on local priorities, appropriate for a diverse and growing city?

And, of course, who pays, and how?  This is the subject of my next blog.

[1]           Subsidiaries include five Council Controlled Organisations (CCOs), Ports of Auckland Ltd, and Auckland Council Investments Ltd.
[2]           2012 rather than 2010 is used as the base year to provide for the costs of reorganisation before then, and because of more consistent and therefore comparable reporting.
[3]           The core Council conducts those functions not delegated to Council Controlled Organisations or performed by subsidiaries
[4]           Depreciation is applied to tangible assets, amortisation to intangible assets
[5]           It might be argued that the reduction of $67m in fees goes some way – but only some way - towards offsetting the $157m boost in wage and salary costs
[6]           Royal Commission on Auckland Governance (2009) Volume 1, Executive Summary p15, Department of Internal Affairs
Posted by Phil McDermott