Congestion, Density, and Transit– Have we got the mix all wrong?

The compact city/transit answer to the urban sustainability question


Expensive – and usually loss-making – public transit is enjoying a resurgence in the face of uncertainty over the supply and price of oil, concerns about the proliferation of private vehicles and greenhouse gas emissions, and  questions over the sustainability of our cities.


Transit is generally promoted as part of a programme to increase city densities.  In Auckland, for example, the plan is to recreate a compact city in order to get people out of cars.  A commitment to increasing the capacity of rail-based public transport is intended to support residential densities and justify concentrating public investment in the CBD.
I have addressed some of the issues this raises in earlier blogs.   (E.g., Rethink the Link, Five More Reasons, Thin Edge of the Tunnel Wedge, Derailing Auckland)

Exploring the relationship – the data
Using the Tom Tom international congestion index it is possible to explore the association between congestion and city density.  I analysed Q2/2012 morning congestion figures for 25 North American and 51 European cities covered by the index.  The index is based on the real time experience of drivers in areas of high usage of Tom Tom car navigation systems.  Congestion is measured as the deviation in travel time on individual routes at peak times compared with when they are flowing freely (generally at night).  The higher the deviation, the greater the congestion.


Here are some summary figures for the second quarter, 2012:


﻿
Note the greater range of congestion figures among European compared with North American cities, and their significantly higher high and median figures.

The North American evidence:  higher density = more congestion?
I undertook simple and multiple regressions in each case to establish how far differences in congestion depend on the physical size of cities, how far on their populations, and how far on residential densities.


Among the North American cities only population density was statistically significant, explaining 52% of the differences in morning congestion among cities.  By and large, as densities increase, so does congestion (Figure 1).  The inference is that transport efficiency is no better among more compact cities, and may be worse.

Does transit help?
It would take more comprehensive evaluation to establish how far transit systems might modify this relationship between density and congestion. The US News website provides a ranking of the top ten US transit systems based on ridership, safety, and government spending.  Only five are in the Tom Tom sample.


Figure 2 orders the cities from worst to best performing on the ground of the difference between congestion that would be expected on density grounds alone (as predicted by the regression equation in Figure 1) and the actual congestion recorded.  Hence, Boston has higher levels of congestion (48%) than predicted (27%) on the basis of its density (just 800 persons per square km). And like poorly performing Seattle, it has one of the top ten transit systems as ranked by US News (4th and 9th respectively).

The other poor performers based on this analysis include both high density Montreal, Ottawa, and Vancouver, and low density Atlanta.
This is not a definitive analysis.  Rather, it suggests propositions for further consideration.  Among these, higher densities do not necessarily mean less congestion – more likely the opposite.  And leading edge transit does not necessarily fix the problem.


The European Evidence: there is no evidence
The results for European cities were completely different, adding weight to the argument that context matters: what works in one setting will not necessarily work in another.  Across the 52 cities there is no relationship between density and congestion.  (There is, however, a weak relationship with cities’ physical size, r2=0.25). 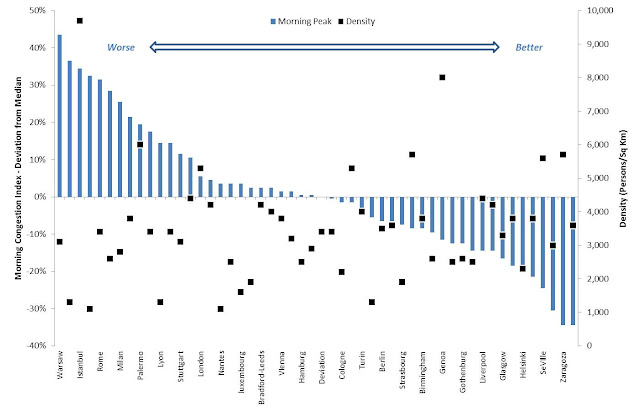 Does transit help?
A listing of the world’s top ten transit systems in 2011 included only four from the European sample (and only the New York subway from North America).  The London Underground comes in third, but London Metro Area comes in at a low 39th on the European congestion rankings.  The Paris Metro is rated fifth , but Paris sits at 46th among the 51 European cities for congestion.  The Berlin U-Bahn sits at 9th place and the city's congestion 21st in Europe.  Copenhagen is 10th in the world transit stakes and 16th in congestion ranking.


While the results are quite different from the North American analysis, the European evidence also offers no grounds for suggesting that density is a prerequisite either to better commuting conditions or that congestion reflects the quality of transit systems.


(A contrarian might argue, of course, that transit creates a commitment to a land use pattern that promotes congestion, delaying or distorting the decentralisation of employment that might otherwise occur in a well-connected city).


Pursuing poorly performing precedents
If nothing else, the analysis raises issues which deserve much closer analysis, especially in Auckland where they do not support plans for a high cost transit system to support a compact city.


While planning – and planners – in Auckland have a tendency to cite overseas precedent to support expanded rail-based transit and higher residential densities, the variability of overseas experience suggests that this is a highly risky strategy.  Context really does matter – not only here but also among the precedent cities our planners love to cite. This is especially the case when poor performers on the congestion scale like Vancouver and Seattle in North America and London and Paris in Europe are touted as paragons of integrated land use and transport planning.


So why do our planners and politicians continue to gamble the city's fiscal future on an economically flawed project which overseas data suggests has limited prospect of meeting its objectives?

It would be interesting to add another component - being the economic make up. ie how mixed the economy is. Some of the European cities would be high office/cbd/education and low manufacturing, as many cities tended to specialise a bit.

I agree, Mark. There are more factors that influence congestion than covered in this simple analysis. Employment and land use are up there, including the mix and location of service jobs, manufacturing, and logistics activities. The point is that all of these matters need to be taken into account before we blindly adopting narrow transit solutions: first define the problem properly.

I agree with Phil McDermott.It would take more comprehensive evaluation to establish how far transit systems might modify this relationship between density and congestion.