Auckland at a Turning Point 1: The Coming Housing Glut

Too little – and too late

“… over the last 20 years, New Zealand has experienced faster growth in real house prices than any other OECD country. Housing has gone from being abundant and reasonably affordable to being scarce and prohibitively expensive, especially in our fast-growing cities.”

The decline of housing supply in New Zealand: Why it happened and how to reverse it, New Zealand Infrastructure Commission, March 2022

The Infrastructure Commission concluded that faulty land use policies created a housing shortfall in Auckland over the past twenty years. It was right. The policy of rationing residential land as demand grew rapidly and became more diverse means Auckland has world-leading house prices. This has had recent spill-over effects among smaller settlements as Aucklanders look to move outside the city.

Despite this, the Commission endorsed Auckland's Unitary Plan and the government’s Medium Density Residential Standards, supporting even more intensive development. Well, it’s too late. Two wrongs don't make a right, Piling more housing into a falling market looks like the next big blunder.

A city on an isthmus always faced growth challenges.  When Auckland Regional Council (ARC) in the 1990s dumped policies to disperse growth among four nodal subregions (north, west, central, and south) and opted instead to intensify development focused on the CBD, the writing was on the wall.

The 1999 Regional Growth Strategy relied on boosting density within a metropolitan fence and on blind faith in the capacity of ageing infrastructure to accommodate it. It failed to consider how much employment land to provide, and where, and relied instead on an outdated model of the centralised, white-collar commuter city.  And it paid no attention to the fiscal, commercial, and social costs.

The Chairman of the ARC at the time, Phil Warren, acknowledged the prospect that the Strategy would deliver high house prices and heavy congestion, calling it “a work in progress”. This was too subtle for the planners, who got it attached to local government legislation in 2004.

The rest is history: high house prices, big-city congestion, expensive reconfiguring of ageing infrastructure, and a growing and unfair division of wealth.

From high growth to low growth

Over-emphasising intensification ahead of selective (or, better, satellite) city expansion has been costly. It was also risky, based on the presumption that Auckland would be a long-term people magnet despite the fact that more New Zealanders were already moving out than moving in.  Its no surprise that a trickle in the 1990s is a flow today.

So, the planners had to bank on international migration to prop up their projections despite another fact: migration is cyclical (Figure 1).  The arrivals boom of the last decade was running down well before it was sunk by Covid.  Numbers peaked in 2017, then fell in 2018 and 2019, departures not so much. 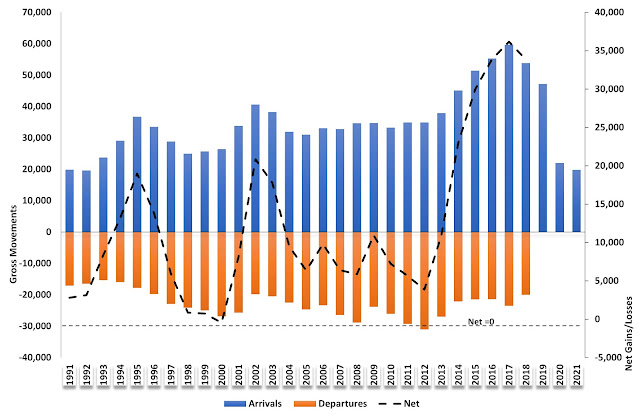 Another fact: Auckland’s much-touted dominance of national growth has been falling since 1996 (Figure 2). With Covid, it stalled completely, while the rest of the country grew. So much for the heroic planning extrapolation of continuous growth. 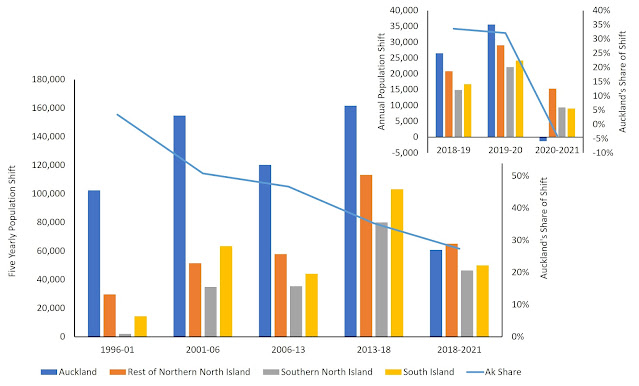 This is not what we expected – or planned

It appears that the Council justified its plans and infrastructure spending on flawed expectations. Compare Auckland’s June 2021 population with two sets of Statistics NZ projections, for example (Figure 3).  The Council used the medium projection published in 2017 (based on the 2013 census) to inform its updated plan, Auckland 2050. Published in 2018, this projected 29% more growth to 2021 than actually occurred. 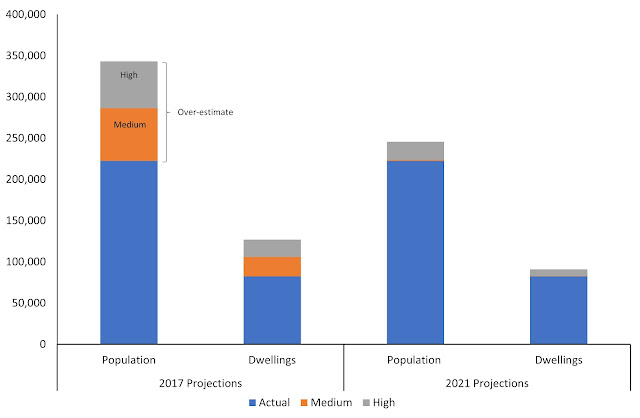 What are the consequences?

Promoting multi-unit infill housing when growth stalls raises the risk of a surplus of dwellings, particularly apartments and units. Are we looking at a housing glut?

This shortfall may have led to a lift in household occupancy with more large multi-family, multi-generation and non-family households, and left more people homeless or living in institutions [3] which, incidentally, raises questions about the drive for more small dwellings. We certainly need to know more about social and demographic changes affecting housing demand before we can be confident that boosting multi-units indiscriminately across Auckland is the solution to the city's housing woes.

Since then, measures taken to facilitate consenting have lifted construction. In the four years to December 2021 63,000 consents were issued, equivalent to around 60,000 completed dwellings. However, population growth of just 60,800 people over the four years to June 2021 would have generated demand only 21,000 new dwellings. This suggests a surplus of close to 40,000 new dwellings relative to population growth.

This is good news for new home seekers if it corrects an over-heated market, although it’s not clear that it resolves the need for well-founded and well-placed social housing.

While the figures here are estimates, the story they tell is compelling. The pendulum is swinging back, with the prospect that an emerging  housing surplus becomes a glut.

Short-term supply constraints may defer that outcome. Yet, while house prices should fall, Auckland’s flawed growth strategy has already made life hard for young households, and less attractive for empty nesters. So, with borders reopening post-Covid, international departures may well exceed arrivals for several years. The population slump promises to be prolonged.

Stand by for a disrupted housing market

Over-supply is not good for the construction sector. Those with long memories know that a slump in housing demand packs a triple punch. It undermines many businesses committed to a key economic sector, with negative flow on effects. It slows household spending as equity falls, especially if interest rates rise. And it generates a flow of construction skills west, across the Tasman.

If the latest tranche of cookie cutter units proves too crowded and cramped, other skilled and motivated young households will be joining them. For those assigned unwillingly to “generation rent” higher wages and lower prices across the Tasman may still offer the best path to home ownership.

Where, then, will the new demand come from to pay for the council’s super-city commitments and aspirations?

Are there figures available on how population translates into households required. I assume the proportion of large families, singles ( both young and old) and single parent families etc is varying with time?


It would also be interesting to see occupancy rates. With the recent capital growths, leaving households empty must have been viable