The compact city – a crumbling consensus

The policy consensus promoting compact, centralised cities cannot be sustained in a world ravaged by Covid-19. The current pandemic is accelerating the move to dispersed urbanism. Beyond the direct impact of disrupted trade, travel, and consumption on the economic foundations of cities lies the cascading impact of changing work behaviours. This post considers what remote working might mean for urban development.

Calculating the number of jobs that can be decanted

This post considers the possible impacts on urban function and form by applying the MGI approach to New Zealand’s cities and districts.

The share of tasks that can be undertaken remotely has been calculated across 19 sectors for 67 territorial local authorities (TLA).  The results have been aggregated into: (1) the three largest cities (Auckland, Christchurch, Wellington); (2) ten provincial cities with populations between 50,000 and 175,000; (3) partly urbanised districts characterised by smaller towns and townships; and (4) mainly rural districts encompassing rural areas and small settlements (Figure 1). 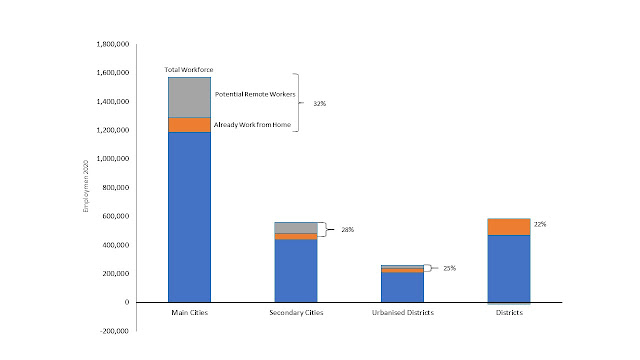 The potential for remote working appears to be a matter of scale: the large urban areas offer the greatest opportunities. 36% of Wellington’s jobs could be done remotely, 32% in Auckland and 29% in Christchurch. The potential is lower among small provincial cities (28%), partly-urbanised districts (25%), and rural areas (22%).

It appears that more urbanised areas have greater potential to substitute remote work for fixed-workplace employment.  This is confirmed when we plot potential for remote working against urbanisation across all TLAs (R2=0.47, Figure 2). 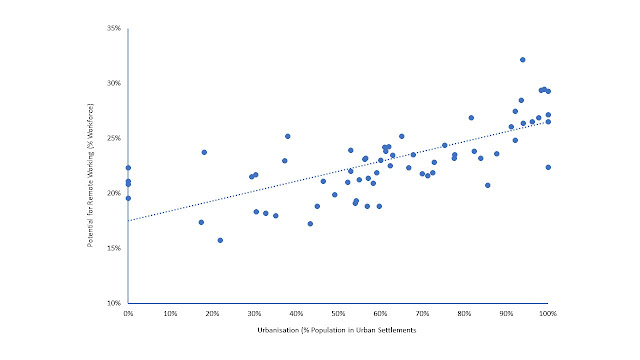 Examination of the variation around this relationship between urbanisation and remote working potential indicates the role of differences in local employment structure.  More production-based jobs offer lower potential for remote working, while more business and service jobs lift the potential.

Where within the city?

This section considers variation in the potential for remote working within Auckland (New Zealand’s dominant city with 1.7+m residents). Figures for 20 Local Board areas based on the MGI sector coefficients have been aggregated and organised in Figure 3 from north to south (left to right on the axis).  Reflecting the city’s linear geography, areas at each end are most distant from the CBD.  The CBD and its fringe comprise the “Central” area, sitting within the Isthmus, which contains the city’s older, inner suburbs.

Based on this example, remote working potential varies more within the city than among cities, ranging between 41% in the centre (47% in the CBD fringe) to 10% in the upper north and west and 2% in the rural south. The former reflects the high value, administrative, business, and professional jobs in the inner city and suburbs, and the latter the greater share of manufacturing and personal service (face-to-face) jobs in the suburbs and primary production on the fringe.

Figure 3 The Prospects for Remote Working within Auckland 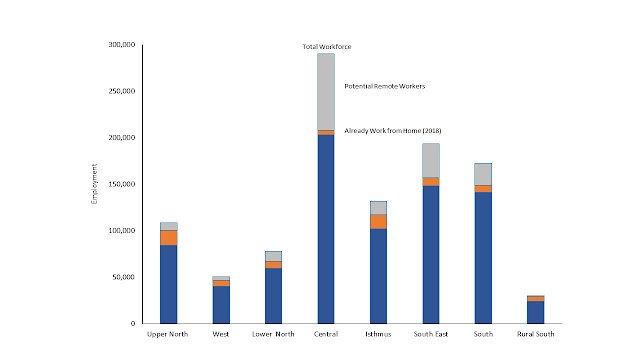 Much of this theoretical capacity is likely to be taken up.  On the push side, the risk of exposure to infectious diseases is reduced by limiting exposure to places where people congregate for work, education, and entertainment. One benefit is limiting the spread of other infectious illnesses, a personal and productivity bonus. Remote meetings offer another productivity gain, lowering travel costs and focusing information exchange, supervision, and negotiation.

On the pull side, remote working has been positive for many people and businesses, with reports that the practice is being adopted on an ongoing basis in New Zealand despite limited community transmission of Covid and internationally.

What about the downsides?

A suitable work (or school) space within a dwelling is needed to maintain both productivity and satisfaction from remote working at the individual level. With housing affordability constraints impacting on younger people and families, in particular, their capacity to work effectively from home will be constrained.

Lack of face-to-face contact with colleagues limits the benefits of work based social interaction. In a Covid-free environment, however, one option is to mix remote working with workplace attendance one, two, or three days a week.

Impact at the centre

However it evolves, the urban impacts of remote working will be far-reaching. As employment in the central city stutters, policy makers and investors will have to rethink the principles of workplace location, investment, and development.

Hospitality, personal services, and discretionary retailing in the city centre will suffer from reduced commuter and work-related spending. They will also suffer from any changes in the attraction of the city centre for housing. Modest apartments in multi-storied buildings marketed for a city lifestyle will lose appeal, becoming a welfare, last resort, or first housing step rather than lifestyle choice.

Add the deskilling of high order services, displacement of predictable or repetitive transactional tasks by AI, and the prospect that the international travel industry shifts away from mass tourism, and the outlook for city centres as we know them dims.

Against this, the resurgence of suburban centres, provincial cities, satellite towns, and country life may build on the intrinsic appeal of living locally as more people decamp from intensively urbanised areas, provided, perhaps, that the policy-makers do not seek to impose the densities of inner cities on under-resourced suburbs and cling on to the notion of commuting-based city centres.

As it stands, the compact city comes at considerable cost. The demands on ageing infrastructure from intensification were never anticipated by the city builders.  Maintaining or rebuilding energy and water supplies, the capacity and reliability of wastewater systems, boosting transport networks and retrofitting ageing transit systems all demand substantial expenditures, mortgaged in large part against expectations of growth that must now be in doubt.

If nothing else, the impetus Covid has given to dispersal must shift attention to infrastructure challenges in existing suburbs.  While highlighting the hard questions in a policy environment beset by an unnatural aversion to greenfield development (in which the potential for sustainable settlement has suddenly become compelling); it also raises challenges for small, erstwhile sleepy settlements unprepared for the demands of a growing flow of ex-urbanites.