What happens when there are not enough houses?

The Centre commissioned some important research, developing tools for analysing housing markets; looking at housing supply and demand, and their impact on prices; identifying the needs of different groups; examining regional markets; and most importantly documenting changing trends in affordability, ownership, and the disturbing emergence of the intermediate housing market.


But this posting is not a wake for CHRANZ.  Fortunately it has created an important knowledge base that enables us to understand the challenges we face, and which will be relevant for some time to come.[1]

It’s ironic, though, that its closure takes place at a time when there are more questions over housing than ever, more challenges and more uncertainties.


Housing – the perfect storm?
Rebuilding Christchurch The earthquakes in Christchurch throw up huge questions over how and where many residents will be housed, and even more questions over just what will happen to the city’s population in the medium term, and its projected demand for housing. 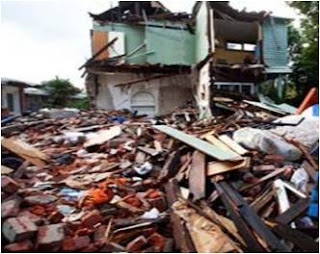 Since writing the first version of this post I have been reminded of the leaky homes saga - a housing crisis all of its own.  The New Zealand Herald today reported that many owners of monolithic cladding homes which are not damaged or have been certified as watertight will be in for a shock when new valuations are received: the market is downgrading them on apperances alone. That in itself is enough to slow the market down as equity diminishes and the rungs in the housing ladder get just that much further apart for a large number of owners.

Much worse though is the continuing prospect of major repairs or even demolition for those that do have leaky homes.  The 2009 "consensus forecast" was 42,000 homes leaking then or that would do so in the future. (The figure could be a lot higher).  That's a lot of people stalled in the housing market, a significant number of whom presumaly need new homes.

Housing affordability has become a persistent problem, nowhere more than in Auckland. This is manifest in measures of housing stress, falling affordability, and a rapidly growing rental. [2]


Rapid growth in rental demand (up 56% between 1996 and 2006) is happening in a country with no strong culture of renting (except in social housing), with poorly defined tenant/landlord rights for long-term tenancies, and a weak supply sector.  Rentals used to be based on ageing detached housing stock.  In the past decade small apartments proliferated.  In both cases, though, landlords are mainly small scale investors, individuals, family trusts, and the like.  A string of failures among developers and financiers has now scared them away, highlighting a major institutional market gap.
The Intermediate Rental Market (households with at least one income earner that cannot afford to purchase housing even in the lower price quartile) has exploded. This group grew by two thirds and accounted for all national growth in rental demand from1996 to 2006: 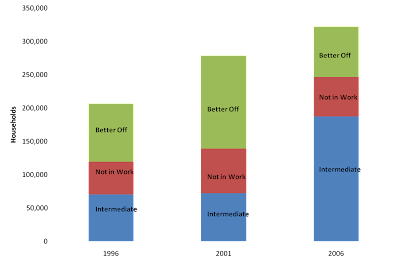 Housing starts have fallen dramatically since 2006, shrinking supply and sustaining high prices. We can see this by comparing annual dwelling consents issued between 2001 and 2006 with those issued since. Nowhere is the fall more pronounced than in Auckland:

The most obvious consequence of this collapse in house building is that we cannot begin to meet demand for new housing called for by our population growth, with new houses falling well behind our projected needs.  The first column in  the diagram below shows the level of house building between 2001 and 2006.  The second column shows projected housing from 2006 to 2016 (most forecasts agree on these sorts of figures).  The third column shows what we got over the the last four years - already well behind the projections. 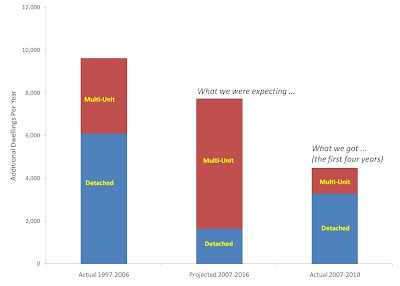 Recent migration offers no consolation. Among people coming and going who nominated their occupations, New Zealand only gained in the professional category in 2010.  It lost out on people in the trades, technical vocations, machinery operations, and labouring. It looks like we've got more people to think, plan, regulate, and litigate, and a few less doing things. 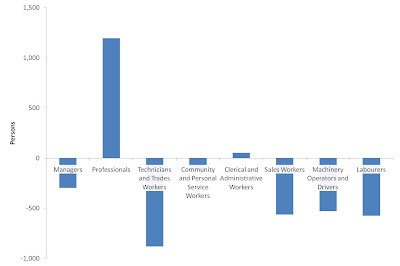 Source: Statistics New Zealand
A quick intro to the agencies
CHRANZ' role was to help us understand these issues, and explore solutions.


Housing Corporation New Zealand is a crown entity responsible for social housing.  It manages 66,000 rental properties and also works with third sector providers. These are the community based organisations, such as the Cooperative Housing Centre of Aotearoa New Zealand, that work to get low income households into their own homes.
The Department of the Prime Minister and Cabinet has also got involved, preparing a report on the price of housing in 2008, and continues to monitor things. Now the Productivity Commission is also looking closely at housing, showing that government is taking the current state of affairs seriously.


The Building Research Association of New Zealand (BRANZ) represents the building industry and promotes good practice. Its research tends to focus on materials, building systems, standards, and the like, although it has delved into projecting future demand.
Of course, local councils have the most immediate impact on and prime responsibility for housing supply and affordability through their capacity to zone and release greenfield and brownfield sites, how they regulate it, the infrastructure services they provide, and the charges – including development levies – they apply to do so.
So how do we weather the storm?
How these agencies work together and adapt their programmes to focus on a real, pressing, and complex need is the outstanding question in today’s housing policy environment. Getting across multiple agencies and creating the conditions for them, the third sector, and the private housing suppliers to work towards the common aim of increased, affordable housing of an appropriate standard is a major challenge that the country faces.


The Canterbury earthquakes may be the game changer. They could demonstrate just how we might respond to a housing crisis through a statutory body set up to drive recovery (the Canterbury Earthquake Recovery Authority) and a commitment to training the people required to resource rebuilding.
This is important because, while they may not be as spectacular, visible, or traumatic, there are housing crises elsewhere in New Zealand.

Moving forward
CHRANZ has set out the parameters of the housing problems facing us: now may be the time for those left standing to progress the solutions - with urgency.

This will involve a range of parties working purposefully together to provide practical and realistic solutions.  Among other things, the private and public sector and central and local government may have to really collaborate towards a common end.  And councils need to think seriously about what the part have to play to avert the crisis.  It may just be time to shift their plans for housing to focus on people's needs and the constraints they face.

If they do not get on with it we may be left with just three possibilities.

One is that we will be landed with powerful housing authorities in different parts of the country tasked with circumventing existing barriers to solve the problem.  Crises may justify centralising power.

Another is that frustrated demand might just disappear, melting with the departure of growing numbers of young people (and others) from New Zealand, and fewer arrivals from elsewhere.  This does nothing for the economy as a whole and might further reduce the capacity to resource the housing supply sector.

The third? A deepening housing crisis, with all the personal, social, and economic dislocation that can bring.


[1]           I have to declare an interest here, having been involved in one of the last pieces of research commissioned by CHRANZ – but not yet published.
[2]        DTZ New Zealand, 2007, The Role of Home Ownership and the Role of the Private Rental Market in the Auckland Region, CHRANZ, Pp81-91.
Posted by Phil McDermott

What happens is a locked-in poverty class, if my own thinking is right. It's devastating stuff.

Money can't solve the problem on its own because money can't buy what does not exist. If you engineer an under-supply of houses then more money from more GDP will just bid up the house prices.

Forgive my pessimism, but something tells me the problem isn't going to be solved because the powers that be don't want to solve it. So far they're only pretending to care, as it seems.

We have the 'pefect storm' do we not Phil? Restricted personal incomes and discretionary expenditure; regulations that limit housing choice, often directing people to housing forms and places that they don't always want (e.g. apartments in selected nodes) but which 'planners' think are best for them; and huge consenting and development costs front-loaded into the matrix. Any developments outside of the 'box' have to run the legal non-complying activity gauntlet, with increasingly little chance of consent due to the primacy these district plan provisions are given, deserved or not. Even 'complying' developments are exposed to exhaustive and expensive analysis by ecologists, urban designers, landscape architects and planners, amongst others. Perhaps we have become so precious about the planning 'process' and the standards expected of development that the basic right of an affordable and desirable roof over our heads is becoming unobtainable for many?

Maybe we are so busy planning for good cities and good countryside (whatever the current take on "good" may be), Shane, that we forget about the people. When do planners start the process with what people need and how they might prefer to live, and then work back from there to see how it might be delivered?

The tendency for planning to swing between between the latest abstractions of how the good city should work (the silver bullets usually fired first by out-of-towners) is inconsistent with a complicated and rigid planning process that ultimately promotes only the status quo.

Do you know anything about Auckland's legal relationship to Agenda-21 - do they have one? Is there is any kind of binding planning agreement between Auckland and a UN body?

I agree with this. The fact that residential real estate is a preferred investment around the world is a major problem. There needs to be a serious reckoning with rules around purchasing residences of certain types in certain areas as investments.