Are all Cities Born the Same?

Urbanisation and development: a history in under 200 words
Way back in my youth we were taught that cities grew because of specialisation.  As societies became more specialised they produced sufficient food to support bigger populations.  This, the manufacture of basic tools and implements, and exchange of surpluses led to concentrated settlement.  This could be where raw materials were present, transport routes converged, or defences could be mounted against marauding neighbours.  Craftsmen multiplied, guilds formed, markets emerged, armies assembled, merchants traded, knowledge deepened.   So towns and cities became centres of production, repositories of knowledge, places where wealth – and poverty – accumulated, where capital and labour met.


This sequence was highlighted in 19th Century Europe and North America.  Rural productivity gains released whole communities from the land, their labour supporting the emergence of machine-based factories in the cities. People housed in rapidly growing urban areas could be employed to generate far more goods – and wealth – than any subsistence, feudal, or village-based society could.
This pattern was repeated more or less in Asia’s development and continues in developing nations in different ways today.

Can cities grow themselves?
Of course, there are variations.  Certain cities may be favoured, for example, by technical progress. A low cost workforce, evolution of skills and technology can compensate for less than ideal location. And in today’s age of middle class consumerism sunshine and sea can favour localities with otherwise few advantages.


So the current policy preoccupation with how cities might grow themselves is interesting.  This might lead to plans to increase densities in the hope of lifting productivity; or pushing the quirky and creative in an attempt to attract knowledgeable people and knowledge-industries; or promoting Big Projects like performing arts or sports stadiums and convention centres.
Promoting cities this way, the theory goes, will make countries succeed through a process of civic bootstrapping –creating urban advantage out of nothing, or at least very little.

How realistic is this, and how widely applicable?

The Triumph of Cities?
Academic Edward Glaeser’s recent book, The Triumph of Cities, brings together a lot of these threads.  It goes further, turning my old professors’ theories upside down.  According to Glaeser the city drives development, it’s a human "invention" that itself facilitates advancement.  The city is a generator of ideas and not just the repository, the source of development rather than the consequence, and, latterly, the saviour of the environment, all driven by the way it concentrates human capital.

From his experience of cities Glaeser offers a prognosis.  If we accept the city as a triumph, we can live with the negatives, including urban impoverishment.  Even where people congregate in poverty they will find a way to progress.  But in spatial terms that progress, he thinks, should be upward rather than outward.  Higher density cities mean even more interaction of people, more productivity and the bonus of a smaller carbon footprint.

While these ideas have popular appeal, I’m not convinced of their universality.  I don’t doubt an association between urbanisation and progress.  Much of Glaeser’s career has been based on demonstrating it.  But I don’t believe even now we fully understand cause and effect – certainly not enough to provide a recipe for prosperity based on one view of how cities should evolve.  Nor do we have the crystal ball to understand the future technologies that will shape – and reshape – cities.


My preoccupation has been with cities in a very small corner of the world and their particular shape and needs.  Based on that experience, though, I’m not sure that Glaeser’s bigger corner justifies the sweeping generalisations he makes.
The elephant in the urban room
I have examined UN Department of Economic and Social Affairs World Urbanization 2009 Revision data for 1960 to 2010 to consider the dynamics of global urbanisation.  Urbanisation is taking place today at a rate without precedent.  Just how far, then, does dwelling on past experience take us?


The world’s population grew by around 3.9 billion over the last 50 years.  64% of that growth (close to 2.5 billion people) was in urban areas, a spectacular 250% increase in urban dwellers.  Of these 57% were in Asia and 14% each in Africa and Latin America and the Caribbean (see diagram).
Europe and North America, where much of our thinking about cities originates, together accounted for just 14% of urban growth.  How far can prescriptions for the rest of the world be based on this heritage now that the world’s biggest urban growth challenges reside elsewhere? 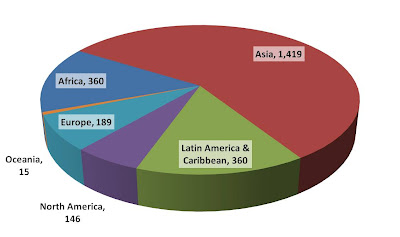 Global urbanisation trends
I plotted the growth increments for each world region divided among cities with more or less than 1 million residents (as well as rural areas).  There are significant differences, even at this high level. 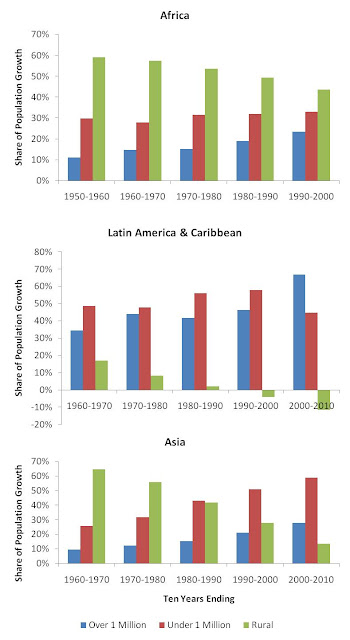 
Even on the more developed continents patterns diverge.  Rural depopulation is stronger in Europe than North America.  In Europe smaller settlements have taken over growth from larger cities.  In the United States large cities remain dominant. 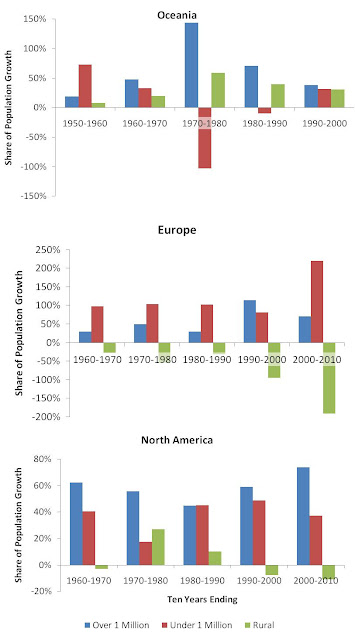 
(Oceania is complicated because of small populations, only six large cities, and because Brisbane, Perth, Auckland, and Adelaide all hit millionaire status during the 1980s and 90s).
So who’s right?
There is no obvious pattern here.  Maybe we cannot generalise about urbanisation.  We are seeing quite different forms and stages of urbanisation in quite different settings.  And among cities even within the same region there are bound to be huge differences in urban process, progress, quality, and character.


How well does Glaeser’s book reflect this diversity, and how widely applicable might his prescriptions be?  The Triumph of Cities refers to around 75 cities.[1]  Collectively they account for around 11% of the world’s urban population.
Nearly a third (24) have populations over 5 million. This compares with just 9% of the world’s 590 cities of 750,000 people or more.  There are 19 cities in the world housing more than 10 million people: as far as I can see Glaeser mentions nine of these, focusing on places like New York, Boston, Chicago, Detroit, San Francisco, London, and Paris.


And, half of Glaeser’s city references are from North America (36 from the United States) and close to a quarter from Europe.  Only three Chinese cities appear to merit a mention, and four from India.  Yet according to the UN data, of the 590 cities with over 750,000 residents 131 are in China and 59 in India, compared with 56 in North America.
While the Triumph of the City is informative and occupies an interesting space between academia and populism, it falls short of its ambitions.  It draws sweeping conclusions from a partial and inevitably selective sample.

Perhaps ambitions to produce a prescription for successful cities will never be realised.  I suspect my teachers’ theories also fall short in today’s urbanising world.  But I cannot accept that the city is a triumph: it just is, and it is in many forms, each with its own challenges and opportunities.  Even if we accepted Glaeser’s prescription for better cities, we would have to ask for whose cities, and where?

Interesting patterns - but looking forward what are the major trends?

Was post 1950's growth a natural country centralisation, as we moved to a consumer based society, with efficient agriculture?

And how much of that consumerism has been overstated as a % of the "real" economy due to debt/currency printing etc? As the bills come to be paid will we see more shifting back to agriculture/manufacturing? less city based economic focus?

What happens now with globalisation? how many business finance centres do we need?

A lot of questions I know - but our city planners seem to work in isolation......Given next 10-20yrs of stagnant economies, my suspicion is we'll see a shift away from Govt as 40+% of economies, and get back to more normal historical levels. Will those jobs shift out of govt depts in wellington, to agriculture supporting towns?

Demand or desperation? Some have claimed that people in 3rd world nations have basically been forced into cities due to corporatised farming, leaving them desperate and redundant. I'm not too sure, but the question is there as to whether those massive cities are the inherent preference of the otherwise agrarian peoples. The conditions for workers in the early industrial revolution were a horror story too. Surely they were only there because the alternatives were even worse?

The future for cities is up in the air (demand-responsive planning permitting!) with technology, like you said. Personally I don't think it's entirely speculative though. The internet, self-driving cars, and robotics in general will probably drive people into ever-greener lifestyle developments simply because they can have the best of all worlds - that is; nature, quiet, efficiency, access, and good paying jobs.

But yeah, a specific evolution will always be guessy and no planner can say they know what we'll develop exactly, nor how demand will evolve to it. A cautious, open-ended plan is the only responsible one, especially in todays world.

-The reader might find my own piece on robotics of interest (if you can excuse my spam):

I would like to know how good the prospects are inspite of the misanthropically so-called "growth skepticism" that keeps people blindly to quite modern secular and ideological beliefs.

Also, I am weighing on a cautious, open-ended plan that has to be merited during a series of public debates.