What is planned for new houses in Auckland?
The discussion of housing in Auckland Unleashed, which sets the Council’s thinking for a spatial plan, follows a tried and tested formula.  It talks about the different sorts of houses we might use to achieve higher residential densities in the city.

On housing and neighbourhoods it says that it is important that:

Auckland has a clear strategy concerning the way it wants development to proceed in our town centres, avenues and areas of intensification. Delivering new and appropriate house types requires a rethink in planning policy (specifically density rules and onsite parking requirements), a commitment to achieving design quality, new approaches to home ownership and land subdivision, and importantly, investment in the amenity of areas (streets and open spaces) in which they are proposed. (p143)

This sounds well and good, but it’s planning for a particular vision of how a city might work.  It falls short on how its residents might want to live.  Like all such strategies, it’s about housing as a land use and houses as design elements.  It’s not about households and their residents.

It was the same in the old Auckland Regional Growth Strategy; notions of diversity and affordability emphasised structures for smaller dwellings, rather than what people might need.  And from what I have seen, it’s been the same in the planning documents for the Bay of Plenty, Hamilton, Christchurch, and Wellington.

So what about the people who will live in them?

I looked elsewhere in Auckland Unleashed to see what it might say about people rather than buildings. There were some expectations outlined under the heading of Housing (page 42).  But they were hardly convincing.  Here are some responses to what I found there:
Auckland Unleashed says: Households with children will decline to one third of households by 2040.
Really?  That’s not very helpful.  A quick look at Statistics NZ’s latest medium projection for the region (to 2031) does show a likely slow-down in the rate of growth.  But it also projects 71,000 more families with children in 2031 compared with 2006.  Sure, their share of the total will contract (from 52% of the total to 44% in this projection) but let’s not obscure the need to house many more families over the next two or three decades.    If migration is a key driver of growth, the figure will probably be higher.  How and where will we be housing our families?

Auckland Unleashed says: There will be more divergent family structures –single person, multi-generational, and extended families.
Good.  So hopefully plans will encourage more big houses, especially given the significance of international immigration as a driver of Auckland’s growth.  That’s a big group of people, many of whom will want bigger houses - three, four, five or more bedrooms.  That’s part of Auckland’s appeal to some of them.  For others it’s simply a reasonable response to cultural expectations.

Look at the census data. While there are limits in its accuracy, a pretty clear picture emerges.  The number of one and two bedroom dwellings hardly increased from 1996 to 2006 (what growth did occur happened between 2001 and 2006).  Some 30% of the growth was in three bedroom dwellings, and high 59% in houses with four bedrooms or more. 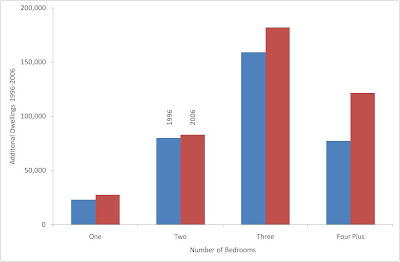 Auckland Unleashed says: Home ownership rates are in decline and possibly 40% of households will be in rental accommodation by 2050, not always by choice.
Now this is a worry.  New Zealand has a long-standing tradition of home ownership.  Much as over-investment has been implicated in the housing bubble, owning a home still plays a significant role in our society and economy.

So we shouldn’t treat the emergence of the intermediate housing market as inevitable, or in the least bit desirable.  This comprises young households with significant income but not enough to become owner occupiers, or to step off the bottom rung of the housing ladder.  The rapid growth of this segment is the reason for the jump in the rental market.

This has big implications for family formation and fertility, educational attainment, employment stability, and a sense of community and belonging.  Home ownership is still important to developing a personal asset base that can encourage entrepreneurship and investment in an economy where over-consumption may have been a barrier to long-term growth.
I cannot see anything in Auckland Unleashed that might counter this decline in home ownership, and if the spatial plan it will inform persists in promoting land rationing through the way it applies the Metropolitan Urban Limit and by pushing inappropriate apartments as a solution to affordability, it will only make the problem worse.

In fact, Auckland Unleashed says to expect in excess of 300,000 households in rental units by 2050.
This is not something that people necessarily want, and not something we should simply accept. Between 1996 and 2006 an increase of 42,000 rental households brought the city’s total rentals to 145,000, 34% of all private dwellings.  This is one of the faces of our housing affordability crisis.

Those that can may just go
But, then again, it may not happen. The inability to buy a home may simply push more young, skilled, and talented people offshore, and discourage the skilled and talented people we hope to attract from overseas to replace them.  If we don’t address the affordability or the suitability of housing for young families then we may as well scale back population projections.  But I don’t see such a slow growth strategy discussed in Auckland Unleashed, even though it is a likely outcome of an inappropriate housing policy.

And many of  those that can't will live in bigger households
There are other responses: one is to pack more people into existing structures.  This is already happening with more sub-letting of spare rooms and attics; more inter-generational multi-family households.

There’s (indirect) evidence that this has been happening a while.  According to the Census, there was an average of 2.95 residents per (private) dwelling in Auckland in 2001.  The average size of additional households over the next five years was 3.22 (the equivalent figure in Manukau City was 4.03).  Consequently, any long-term fall in dwelling occupancy that might have been factored into housing projections can now be reversed.  That raises interesting questions over the housing mix we might be imposing through our plans.


With the slowdown in the housing market since 2006 the chances are that in many parts of Auckland household size is continuing to increase.  Unfortunately, that’s associated with increasing social inequity.  And I couldn’t find anything in Auckland Unleashed that addressed how to plan for increasing household sizes while promoting smaller dwellings, or for the possible impact on social disparities.
Time to introduce people to plans?
We are heading on to shaky ground with housing plans and policies that focus on structure and form rather than on the needs, preferences, and behaviour of households and residents.  Delivering a sustainable city may not be the same as delivering a sustainable community.

Hopefully, the spatial plan when it is prepared will leave plenty of room for the middle ground to emerge, for housing to reflect what people want, rather than just planners' and designers' models of what they should be allowed.