New centres fail to fire
Anne Gibson in the New Zealand Herald reported the recent failures of several large, integrated urban development projects on Auckland’s fringe.  Plans for a number of substantial developments are now defunct or substantially scaled down.   She said that this was a result of “the end of the boom-bust real estate cycle rather than any centralised planning attempt”.
The article attributes the failure to “commercialise” Auckland’s borders to financial failings, to the drying up of bank funding and consequent bankruptcies, and a reliance on too much debt to carry forward bold plans.  What planning could not achieve by way of containing the city, the global meltdown has apparently done.
That is certainly part of the story, but it raises as many questions as it answers.
Short-sighted planning still a problem
Perhaps most obviously, some of the projects cited were overturned because they contravened the Auckland Regional Policy Statement’s commitment to largely containing growth within Auckland’s existing boundaries.  In other cases, protracted planning requirements simply delayed getting projects to the market, precipitating or compounding any problems of financial over-leveraging.
The irony is that a number of these projects were responding to the strictures of smart growth, reducing vehicle dependence, increasing housing densities, promoting pedestrianisation and public transit, and integrating local commercial and residential activity.  Some were potentially exemplars of the sustainability principlesbehind the Regional Policy Statement.  Unfortunately, these principles were buried by the practice of defending the Metropolitan Urban Limit at all costs and regardless of consequences.
So what have been the costs of these projects failing to fire?
The financial losses associated with the failure of these projects can be far-reaching, especially as they impact on promoters, financial institutions, and investors.  More than that, they compound the nervousness of financiers for large developments.
But the impact reaches well beyond any undermining of the development sector.  The long-term cost is likely to be counted in a distorted housing market.  It may even undermine Auckland’s economic growth.
One cost has been a reduction of housing affordability.  In 2007, Motu Research demonstrated the pressure on residential land prices exerted by the Metropolitan Urban Limits.  While the study focused on an unsurprising gap between rural and urban zoned land, and perhaps the size of the differential was of some interest.  But what was most revealing about the data used was that growth in land values far outstripped growth in capital value. Inflating land costs have been a major contributor to falling affordability in Auckland.
Obviously, the inflation of land prices within the Metropolitan Urban Limits has done little for the economics of large-scale housing projects.  It adds to holding costs and by inflating prices for developed land may reduce the rate of uptake.  On this score , it is interesting that the one project cited as making progress in the Herald article, is Housing New Zealand’s Hobsonville development – a public project on publicly owned land.
The gap between the houses we need and what we are getting
Statistics New Zealand projected that between 2006 and 2011, Auckland region would grow by between 39,000 and 60,000 new households each year.  Over the four years to December 2009 there had been just 20,600 consents issued, a little over 5,000 a year.  With just 1,800 issued in the first six months of the current year, there is no sign of a recovery either.
There has been a solid decline in consents for dwellings issued in Auckland since 2004 (see figure below).  Whether this is a victory for market rationality or for our former regional planners so intent on holding the line, it has to be a defeat for new households and aspiring homeowners.  The fact that its share of national residential consents has fallen from 45% in 2002 to under 24% in 2009 suggests that whatever the reason  -- falling demand or constrained supply -- its impact is falling dkisproportionately on Auckland. 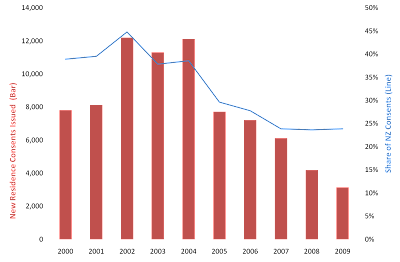 In fact, Statistics New Zealand’s medium projection would see 49,000 new households potentially entering the Auckland housing market between 2006 and 2011, and another 53,000 over the five years to 2016.  Even if this projection overestimates demand, it suggests that supply in the region is “short” by as many as 30,000 new dwellings .
Impacts on Auckland’s growth
One response to a supply driven shortage, of course, is for households to go elsewhere.  It is instructive that Auckland’s share of new dwelling consents in New Zealand has been falling.  Other responses are deferred family formation, a growing number of multiple household dwellings, and in some instances over-crowding.  A turn down in the international migration gains that underpin Auckland’s long-term growth projections may be another result.
The reduction in activity in the new housing market has other effects, one of which is to hollow out the development, construction, and supply sector.  Trades move elsewhere, perhaps to Australia, and businesses shut down.
While it is difficult to separate the downturn in urban development and housing and its consequences from the recession generally, the real issue is one of long-term impacts.  The city is looking at the prospect of a severe housing shortage.   Not only is land for housing likely to be a major issue for the foreseeable future, a diminished housing sector will see prices increases when -- or perhaps if -- demand picks up again.  Infill and brownfield development alone will not do it.  inevitably large scale projects within the urban fabric will compound infrastructure and congestion issues.  They cannot be cost effective, either, without a compromise to quality.
Such impacts and outcomes will be compounded if the significant urban development projects that are needed to provide the residential stock for the next ten to twenty years fail to get off the ground.  The demise of the projects cited is guaranteed to keep residential prices unduly high when there is a lift in demand, and may see the region faced with an unseemly scramble for housing, inside the Urban Limit and outside.
Where to now?
Creating an environment in which plans support rather than stifle innovative urban investment wherever it goes will be one of the challenges that the new Auckland City needs to address now to ensure orderly long-term growth.  We need the sorts of projects which overzealous planning restrictions and difficult financial conditions have conspired to sink in the recent past if we are to have a properous and equitable future.
Posted by Phil McDermott

I liked your point in particular about hollowing out the supply sector. Of course the longer we don't build enough houses, the more our construction sector with retract to the new (reduced) demand, and in turn the longer it will take us to recover (build more houses) when we do finally have a change in land/housing policy (hopefully!).

But it goes further than that. The more we play Mickey Mouse games with housing policy the more investors (from all corners) won't wan't to have anything to do with New Zealand's property market - that translates to more (perceived) risk and then to more costs for the consumer, for even when we do get a turn-around in policy.

However, I would imagine that importing kit-set houses could help carry us over for a period of time, in the event of a rapid policy reversal? Any thoughts?

A final point: I don't think the Smart Growth planners can change their minds. That would be professional suicide because they would be making themselves incompatible with the status quo. We need strong elected officials who can somehow force-change their minds for them.

The investment issues are interesting.
A price bubble pumped up by supply problems exposes funders (banks) and increases their exposure to a correction. Planning induced inflation leads to an apparent equity windfall for current home owners by raising the bar for new entrants to the market. But the correction hurts them more if they have over-extended themselves to buy in.

Imported kit set houses? Not sure that it would be cost effective, and it has the ring of the shonky medium rise housing associated with Auckland's version of smart growth. Coming out of the hole we have fallen into will take some time.

Thanks Phil for your reply,

It's agreeable and unfortunate that it will take quite a while to dig ourselves out of our housing hole, but what's also concerning to me is that the government may have little incentive to allow this to happen regardless...

We've got all those young couples mortgaged up to the eyeballs working a combined 80 hours+ to cover their payments, and this situation can't really change for them. The government of course gets a big cut on their labour with as much as a 40+% tax-take on their work, so does the government really want this work-dependency situation to change(?).
It's just that we now have a big public service to support (lots of votes there), and a massive home-owner population who (now) only want to see the market go where it shouldn't - more votes!

Alas, we can't predict what our politicians will ultimately do.

My comment follows about what Andrew Atkin said:
I don't think the Smart Growth planners can change their minds. That would be professional suicide ..... We need strong elected officials who can somehow force-change their minds for them.

In my experience (as a one term Rodney District Councillor, retired architect/project manager) it would need several successive majority teams of elected members to force the bureaucrats' hand over a 6 or even 9 year period.
A RDC District Plan variation that was drafted in 2006 and supported by bureaucrats has just been overturned by the Environment Court, 4 years later. Moving any MUL would take longer still.

When bureaucrats don't like decisions made by Council they
a) do nothing or
b) repeat the agenda item they want a few months later after knobbling a few weak councillors
c) get a legal opinion that suits them and omits opposing views, to try to scare Council.

Or perhaps the Wanganui model- change the bureaucrats soon after the election and appoint new ones that will do what they're told.