So much for savings from amalgamation
Burgeoning wage costs at Auckland Council are no surprise. They are not an unexpected outcome given that consolidation of local councils generates additional organisational tiers, calls for more managers, and demands greater attention to internal coordination and bureaucratic processes.

I noted a couple of years ago that the costs of Auckland's super city, established in 2010, were already outrunning the combined costs of the eight councils it replaced:


the operating budget for Auckland Council in 2012/13 is $2.8 billion compared with the collective 2008/09 operating expenditure of the eight councils identified of $1.95 billion (see Royal Commission Report Appendix B). Spending growth of 45% (or $721m) in 2009 dollars compares with just 8% inflation between 2009 and 2012. Transition costs alone can’t explain such a jump - the Royal Commission suggested that at most transition would cost just $60 million a year for four years.

The prediction that employment costs would increase was not so much insightful as stating the obvious. Quite apart from the evidence of diseconomies in over-blown municipalities, anyone who watched the decline and dismembering of New Zealand’s largest corporates in the 1980s and ‘90s could see it coming. Some of our largest companies (Watties, Fetcher Challenge, New Zealand Forest Products, Waitaki NZ Refrigerating, and Carter Holt Harvey) went through a sequence of slow growth, consolidation, and ultimately dissolution. Different parts were downsized, sold off, or shut down and assets stripped as the quest for productivity gave way to the struggle to survive.

Councils are not immune to the conflation and ossification that come with size. But before we predict the unwinding of Auckland Council we need to ask if high costs are simply a response to growth.

To explore this we analyse trends in local government employment relative to population using Statistics New Zealand Census population and employment data (2000 to 2013).

There are limits to this analysis. To really understand why a single council is costing Aucklanders more than those it replaced requires in-depth analysis. It needs to account for changed practices, changes in the mix and levels of services, changes in funding practices, and so on. Nevertheless, the analysis below helps raises serious questions regarding the costs and benefits of amalgamation.

City hall slimmed down? Yeah right
There was a slump and then a jump in local government jobs in Auckland after the new council was formed (Figure 1). So much for trumpeting job cuts in 2010! This was simply a transitional aberration. This is even more obvious when we compare shifts in jobs with shifts in the population local government serves. Local government employment grew ahead of population in Auckland continuously to 2010. Then, after the dip associated with transition to single council, jobs took off again, vaulting way above the already worrying medium term trend. 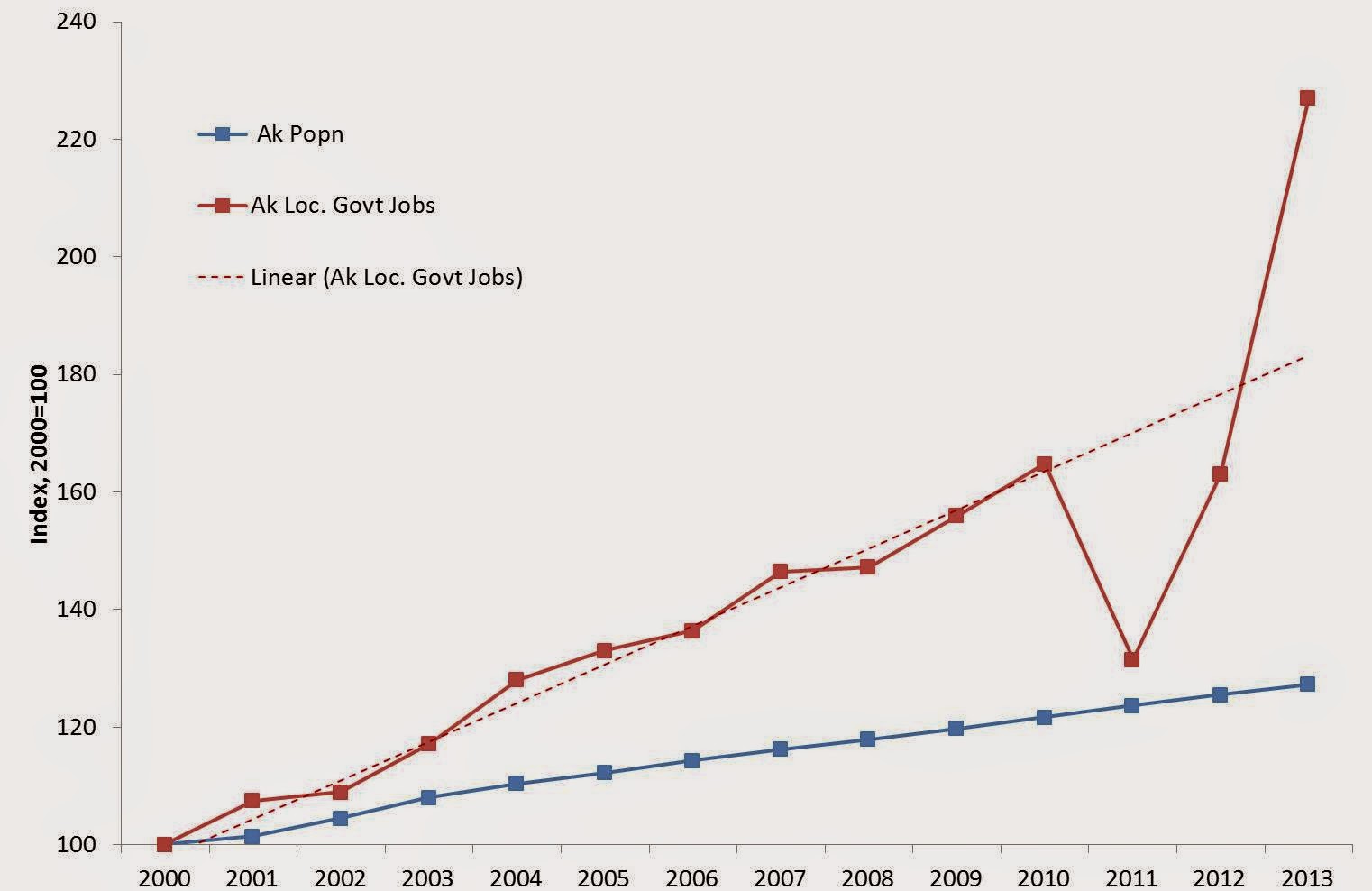 Benchmarking Auckland against the Rest of New Zealand
Growth in local government employment also grew faster than population across the rest of New Zealand . Table 1 shows this using 2010 as a benchmark date. It also shows includes changes in jobs per thousand residents – a surrogate for labour productivity: the higher the ratio the less productive local government employment is.

While Auckland’s population grew by 22% between 2000 and 2010, council jobs grew by 65%. This means it took 35% more people to administer local government relative to the population in 2010 compared with 2000, which suggests an annual average “productivity decline” of 3.5%. And that figure increased after consolidation, by 21%, to 7% a year.
Table 1: Indicators of local Government Growth and Productivity

While the measure of productivity is crude, the growth of council employment relative to population raises a fundamental question: where do the gains from amalgamation actually lie?

The productivity mix
Among sectors that can be identified from the statistics as providing local government services administration apparently experienced the biggest decline in productivity over the past three years (Figure 2). Front-line activities like public transport, museums, the zoo, and gardens actually lifted their productivity between 2010 and 2013. These gains may reflect demand rising ahead of population and employment as well as from operating improvements. However, recent gains follow falling productivity earlier in the decade. And gains in public transport have been on the back of plans and investments made before the 2010 reforms.

In fact, earlier gains in the water and drainage sector halted after 2010, while productivity in solid waste services has gone backwards. Given that these are sectors with generally stable technologies and predictable demand, this outcome is of some concern. But it is more worrying that local government administration, has apparently fallen behind the delivery of local services. 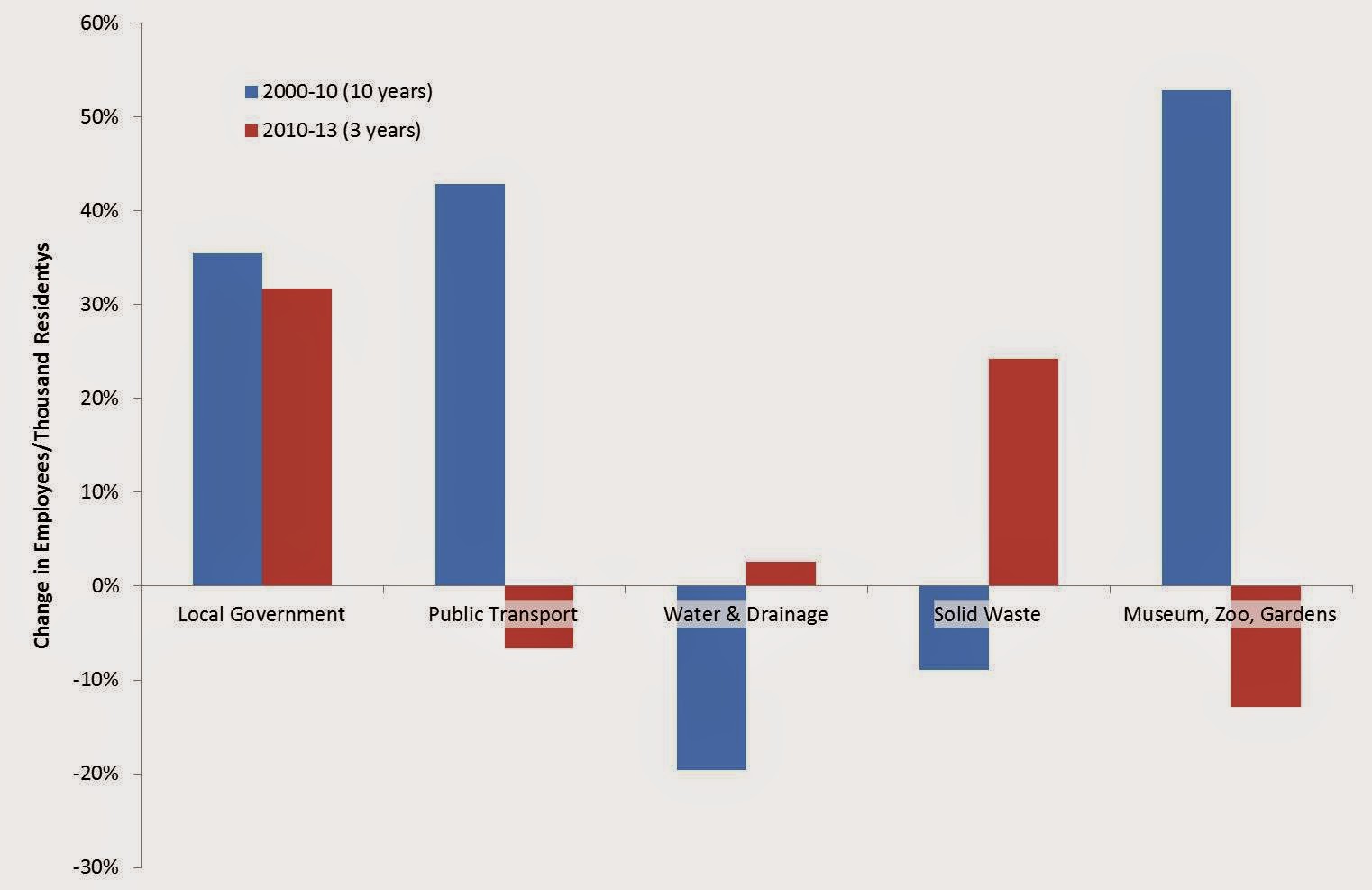 Benchmarking against other centres

A comparison of productivity scores for 18 New Zealand cities ordered from largest (Auckland, 1.5m residents in 2010) to the smallest (Upper Hutt, 41,000 residents) shows that size has little to do with performance (Figure 3).
Figure 3: Comparing Changes in Productivity Across Cities 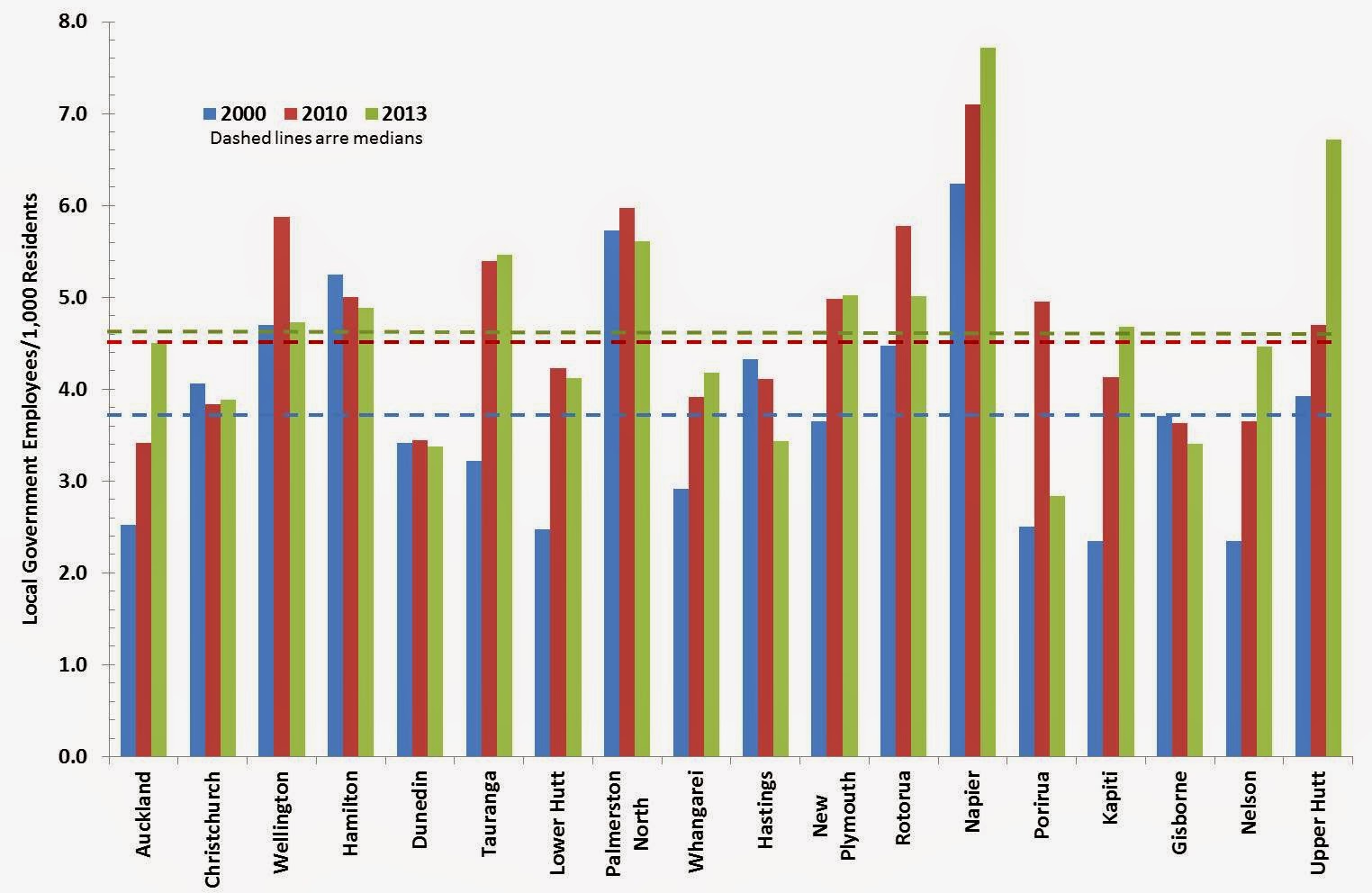 Moreover, from having the lowest score going into 2010, Auckland's index was bettered by eight councils just three years later. These included Porirua, Gisborne, Nelson, Hastings and Whangarei, among the smallest of the country’s cities. In fact, Auckland was the 16th worst performer between 2010 and 2013.

The index used here has its limits. Population is not necessarily the best measure of demand for different services. Comparison may be influenced by the different mix and quality of services offered by different councils. If nothing else, though, the comparison raises questions over how far and why consolidation should be promoted elsewhere.

So what does this mean for future amalgamations in New Zealand?
In 2012 I suggested that it was too soon to tell how the

Auckland experiment was going. A couple of years on I wonder how long we have to wait to see any fiscal or economic benefits. There is no evidence that consolidation has improved productivity. The other, less tangible benefits claimed for it - speaking with one voice being the obvious one – appear to have come at a significant cost.  This is being reflected in charges to ratepayers and the rate of increase in indebtedness.

Whatever the reason for these results, the Local Government Commission should be wary of emulating the Auckland experiment elsewhere.  This includes Wellington where there is considerable political momentum behind proposals for council consolidation. Amalgamation is a perceived solution to issues of local governance that may be more imaginary than real, a solution that we may not be able to afford.  It appears that Aucklanders are already paying the price.