Can we do Bigger Better? Firm Size and the Quest for Productivity

Look at this from the Economist:

Britons and Americans are used to lionisations of the small businessman. This praise is often misplaced; it is not so much small firms that drive growth and job creation so much as small and young firms on their way to becoming much larger. Where small firms are most common, as around Europe's southern periphery, their prevalence is sign of uncompetitive markets and low productivity.

The Economist suggests that the key to productivity is letting companies grow, because bigger companies deploy capital and labour more effectively.  We might add, from our remote New Zealand perspective, that size also gives firms the ability to work offshore markets, expanding beyond a constrained  domestic market.

In this way, size begets size.  And big firms provide the seed bed for innovation (as I argued in Growing a productive urban economy) creating a virtuous cycle - at least up to a point. (For very large organisations there often comes a time when management diseconomies reverse efficiency gains).

What Role SMEs?
In New Zealand we extol the small and medium enterprise sector (SME) when maybe we should be doing what we can to get SMEs to bust out and grow.  And it’s fashionable to argue that if more were to locate within Auckland– our primary city - businesses could reap external economies of scale (so-called agglomeration economies), accessing more labour, more skills, and more services.

But it’s more fundamental than that.  Rather than promoting lots of small business units sharing services and competing in a crowded labour market we really need to do what we can to ensure that more are actually growing.

The Size of New Zealand Business Units
The rest of this post looks at the size distribution of New Zealand business units using Statistics New Zealand February 2011 data. It then looks for evidence that location in Auckland might favour manufacturing by favouring bigger firms.

The statistics tell us that 65% of New Zealand’ Geographic Business Units didn’t employ anyone.  (A GBU is defined by Statistics New Zealand as “a separate operating unit engaged in New Zealand in, or predominately one, kind of economic activity from a single physical location or base.) Let’s set them aside.

So what about the other 35%?  Well, the bad news is that New Zealand’s business units are underwhelmingly small.  63% of them provide 5 or fewer jobs, 78% fewer than ten!

The Analysis
I looked at the size distribution of business units for two “regions” – Auckland (New Zealand’s only city of over 1 million people) and the rest.  Auckland accounts for 29% of the country’s business units and 33% of its employment. 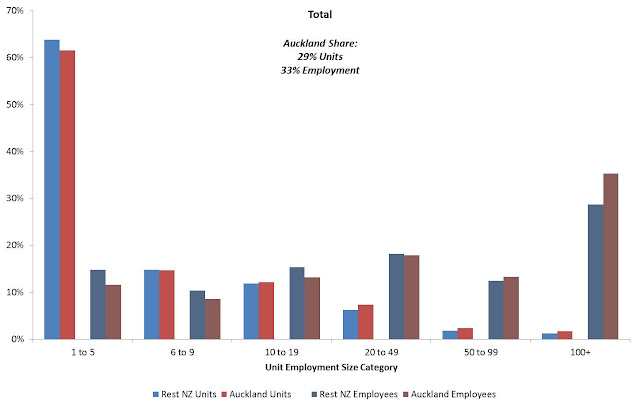 So what does the data tell; us?  Business units in Auckland tend to be slightly larger. Even though over 75% still employ fewer than ten people (compared with 78% elsewhere) there is a marginal bias towards larger organisations, with 35% of Auckland jobs in units employing over 100 people compared with 31% for the rest of New Zealand.

This is consistent with the propensity of businesses in a dominant city to be larger, given a labour resource that can support greater expansion and a larger local market.

Digging Deeper
This exercise has been repeated for manufacturing, and within manufacturing for the dominant food processing sector (67,850 employees nationally) and for the next three sectors, equipment and machinery manufacturing (26,060 employees), metal products (21,650), and wood products (15,970). The charts appear at the end of this post.

Manufacturing
In manufacturing the picture changes.  The rest of New Zealand category has a greater proportion of both small and large enterprises than Auckland.  Consequently, only 32% of Auckland’s manufacturing employees are in firms with over 100 employees, compared with 42% elsewhere in the country.

Apparently the benefits of urban scale do not translate into larger manufacturing enterprises, at least at this level of generalisation.  This  raises doubts over the productivity of firms in the city,  and is consistent with my earlier evidence that concentration of a sector in  Auckland does not necessarily favour its growth .

Food Manufacturing
This anomaly is explained in part by the nature of the food products sector, which accounts for 36% of all manufacturing employment in New Zealand.  It is dominated by large dairy and meat processing works in rural areas, small towns, or provincial cities.  The nature of these long-standing and globally competitive primary processing activities mean that efficiencies accrue outside major urban centres in factories that tend to be labour, land, and capital intensive.

Wood Products
Wood product manufacturing is much the same.  The 21% of New Zealand’s units located within Auckland tend towards medium size (10-50 employees).  Elsewhere in the country 27% of units of employ over 100 people.

So scale, expertise, and a commitment to exporting in primary processing mean that productivity in manufacturing may be healthiest outside  Auckland.  It is also reflected in a heavy commitment to exporting from  secondary centres.  Despite concerns that New Zealand food and wood processing do not produce a lot by way of highly transformed, high value products, sustaining and promoting their scale outside the main urban areas has been critical to their continued competitiveness.

Certainly Auckland (and Christchurch) plays an important role in these  industries, first through housing  higher order or specialised services they might draw on, including logistics, finance, legal services, and research; and, second, as a  location for smaller spin-off firms that undertake more specialised manufacturing and marketing using primary products as their raw materials.

The urban manufacturers
What about sectors that entail a greater degree of product transformation? Metal product and machinery manufacturing fit this description and are, by contrast with primary processing, urban activities.  In New Zealand, though, they are modest both in scale and performance. With a small number of notable exceptions there are few units capable of competing internationally.

Metal product manufacturing tends to take place mainly in medium-sized units, from 10 to 100 employees, particularly in Auckland, which dominates the sector.

The manufacture machinery and equipment has a higher proportion of very small units, and more employees in the small number of large units.  Again, Auckland accounts for a disproportionate share of national business units and employment.

The size distribution of units in these sectors, then, may be tied to the  scale of the  markets they are located  in – making them relatively poor prospects for productivity-driven international sales.  Their capacity to move beyond small scale is most likely limited.

So what does it mean?
If scale is a condition of productivity (and exporting), New Zealand industry faces a major disadvantage.  That’s hardly news.  So far, it has not achieved a lot by way of global performance outside primary processing sectors where scale and accumulated expertise build on a natural production advantage.  That’s not new, either.

Making the point that in New Zealand size, innovation, and productivity happen outside Auckland is an important reminder, though, that much as we might want to pursue planning and policy fads based around urban agglomeration and density, that’s unlikely to offset our intrinsic disadvantages of small scale and remoteness.

So what can we do?
According to the World Bank rankings New Zealand is already third in the world for ease of doing business.  Perhaps the answer is to ensure that it is also easy to grow a business here.

Among other things, a policy fixation which promotes places as the fonts of productivity and innovation – and Auckland as the solution to boosting New Zealand’s economic standing -- may have to change.  The reality is that productivity is associated with organisations –  large and growing organisations, and their capacity to engage in networks ("production and distribution chains") of growing businesses.

The challenge for urban policy makers is to ensure that local conditions, the rules, regulations, and charges  affecting firms, and  the quality and availability of land, labour and capital  do not impede local investment and growth.  How this might be done should  be central to the Auckland Spatial Plan.  I see little evidence that it is. 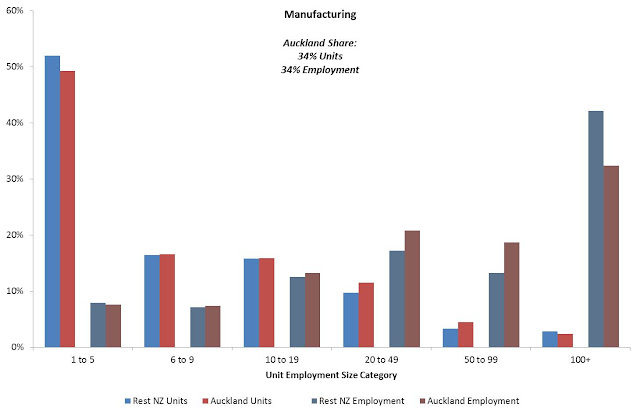 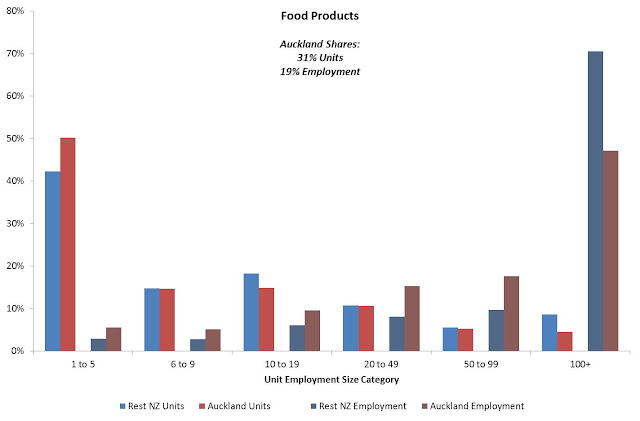 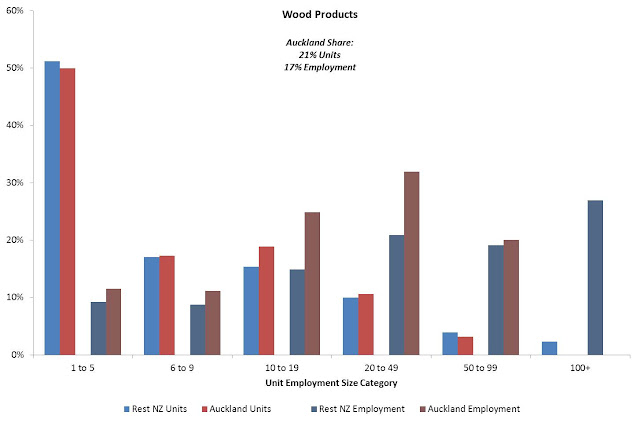 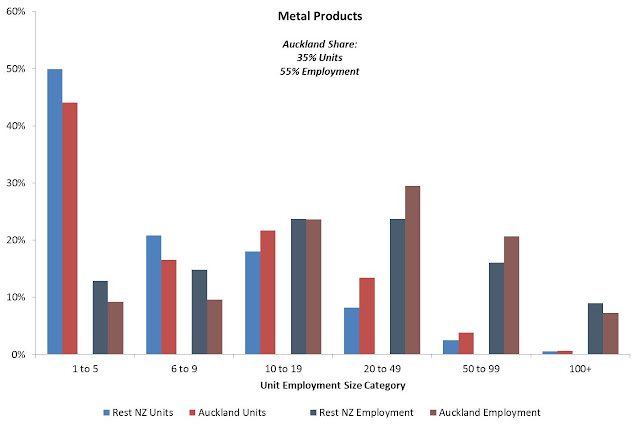 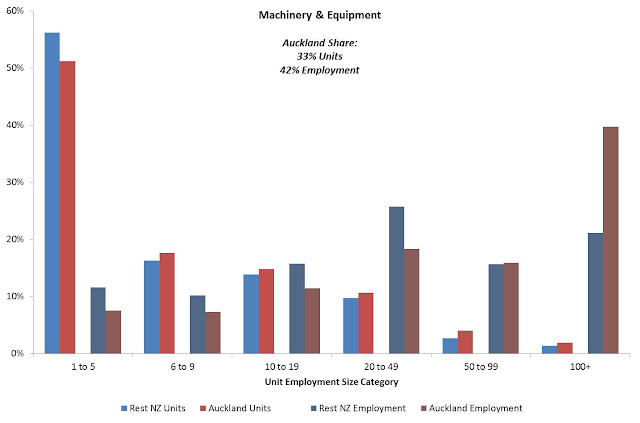