Cities, Cars, People: is changing car use a function of new urbanism?

Thinking dense
One cornerstone for urban designers and planners seeking to transform the polycentric or suburban city of the 20th Century into something resembling the high density city of the 19th was a cross-city comparison by Newman and Kenworthy and successors. [1]  They argued that this proved automobile dependence is a function of city density.  It followed that regulating for greater residential densities and increasing the capacity of public transport systems to avoid the congestion that would follow if people continued to drive themselves would improve the sustainability of cities.

Of course, any comparison with the overcrowded and unhealthy cities of an earlier century is unfair: today’s density is achieved with higher standards of private and public space, and much enhanced transit and sanitation.  And many, probably the majority, of 21st century citizens in high income nations can escape the confines of the urban environment on occasional sojourns to country or coast (or beyond), unlike their 19th Century or developing world counterparts.  They can even find repose in the midst of 24/7 city hubbub in their own in-house media centres.

But can we really build urban policy on the Newman and Kenworthy analysis?  Especially given evidence that car use is declining anyway?

Questionable correlation
There are still questions over the original analysis and it successors.  Cross-cultural effects, physical geography, differences in economic structure, incomes, wealth, and growth all intervene in the relationship between city density and car dependence.  And cause and effect are hard to pin down.

Perhaps more critical: the leap from observing relationships across cities at a point in time to regulating travel behaviour, housing ,and consumption choices into the future assumes that individual behaviour is a microcosm of collective behaviour. This fallacy of inference has long been recognised by the biological and sociological sciences.  And the likelihood of getting policy wrong by making such an assumption is far greater when dealing with populations of people, with their diverse circumstances, beliefs, values, and means, compared with, say, populations of penguins.

Is it this blind spot that has made it so much more difficult to get people out of their cars or their low density houses than anticipated by urban reformists?

The city as a time warp
One problem is that analyses of city density and car dependence are usually static.  Plotting urban form and transport consumption at a particular point in time – the mid/late 20th century in the Newman and Kenworthy case – embodies particular patterns of technology, wealth, and, behaviour.  Consequently, their urban prescription is based implicitly on the 9 to 5 work day; single city centres that focus urban employment, exchange, and consumption; and the nuclear family with its distinctive housing and service demands; all urban artifacts that have been breaking down since the 1960s.

“technological limits set by the inability of cars to continue causing urban sprawl within travel time budgets; the rapid growth in transit and re-urbanization which combine to cause exponential declines in car use; the reduction of car use by older people in cities and among younger people due to the emerging culture of urbanism and the growth in the price of fuel which underlies all the above factors”.[2]

The view remains time-bound; even the reference to exponential decline is a simplistic inference of the relationship between public transport and car use taken from a cross section of cities in 1995.
Individual agency barely gets a mention.  Any description of an “emerging culture of urbanism” needs to be embedded in the reality of evolving patterns of wealth, income, and consumption and even in simple demographics to determine just how real and significant it is.

Growing old and driving more
What are the grounds for the claim that older people are reducing their car use, for example? I took a quick look at the evidence for New Zealand.  It is certainly not the case here.  The rate of growth in driving has been higher among older age groups than among younger – with decline most evident among the under 45s.
Is it so different in the other ageing societies from which Newman and Kenworthy draw their examples? 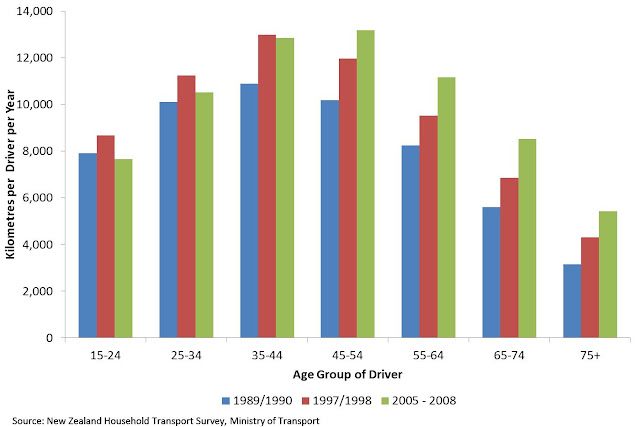 Fewer kilometres doesn’t mean less dependence
What does go a long way to explaining declining car travel in the aggregate is the fact that older people don’t drive as much younger people, and populations in western cities are simply getting older.  It’s simple maths – as the population ages car usage will go down, despite a greater propensity to drive among older cohorts. Again, look at the evidence from New Zealand: 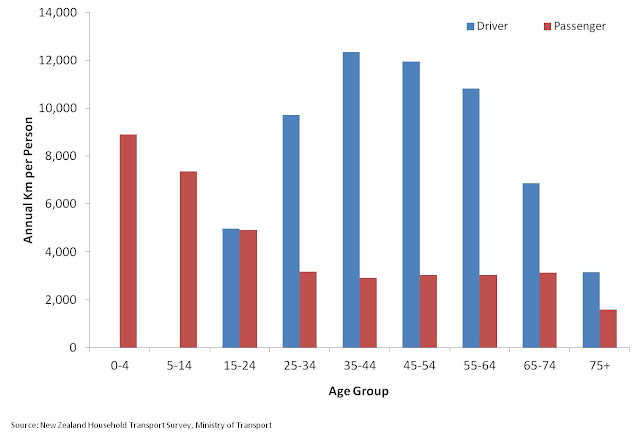 Why does car use fall with age?
There are a number of reasons why this may be so.  From 45 years on households have fewer transport-dependent children.  Mature families may have more localised social networks.  A greater share of recreation may be neighbourhood based.

These explanations don’t depend on particular urban designs.  Yet Newman and Kenworthy claim that diminished driving happens because “older people move back into cities from the suburbs”.  This is not consistent with the common observation of people’s preference to age in place.[3]  (For the New Zealand evidence, see my posting Ageing in the City).

Moving into the centre - a one-way street?
And their notion “the children growing up in the suburbs would begin flocking back into the cities rather than continuing the life of car dependence” rather simplifies a historically specific event: the transition of sons and daughters of the baby boomers from young adulthood, advanced education, and job seeking to the career and housing paths associated with their movement into more stable relationships.  As they age, it is highly likely that suburban preferences re-emerge, sustained by the capacity to purchase and operate a private vehicle.

Generation X boosted inner city dwelling over the past two decades, and Generation Y will do so, to a lesser extent, for another decade.  The 15 to 24 year age group also coincides with the age of greatest automobile independence (illustrated for New Zealand in Figure 3).  But don’t expect this historically-specific phenomenon to sustain some sort of indefinite culture of city consolidation, and I wouldn’t bet the fiscal bank on expensive transit systems designed around the assumption that it will.

These are passing generations: their successors will be that much smaller and facing a somewhat different world.[4] 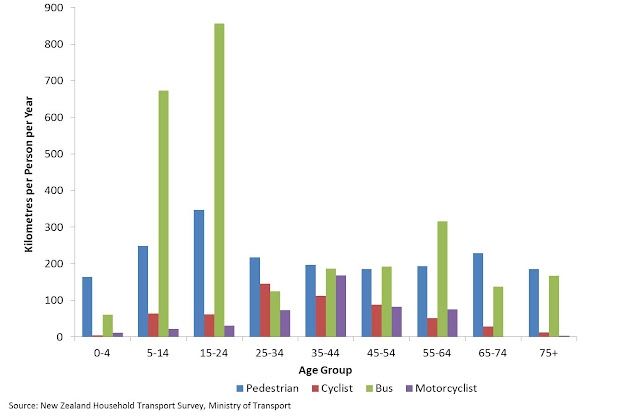 Who are we planning for?
Of course, there are plenty of exceptions to prove the rule: but that is the point.  Diverse communities have diverse expectations and behaviours.  And they are continuously changing, in composition, in form, and in behaviour.

The failure of modernity lay in its assumption of conformity and convergence, compounded by the conceit that we could regulate for it.  And planning for what is little more than a statistical construct – the auto-independent city – risks blinding us to the richness and opportunity of alternatives, of lifestyle, of environmental stewardship, of urban design, and of mobility.

If we start with the behaviour of individuals and households our designs for sustainable cities may be less deterministic and our planning less didactic, better informed, lighter in touch, and a lot more effective in meeting the long-term needs of evolving urban communities.

My best guess is you had it right with the fact that the retired just don't need to make those long commutes, and no kids has to be a huge factor too. Yet, old people might be even more automobile dependant because cycling or waking to a bus stop will be physically harder for them, or even impossible.

Regardless you make an excellent core point that we must be careful not to jump to over-simplisitc (and probably wishful-thinking) conclusions with just broad surface-level data.

It would be interesting to get information based more on talking to people rather than just observing them. Like asking people what they would consider an optimum urban density in terms of what actually feels best experiencially, and then get them to talk about why exactly they choose to live in higher densities, etc. In other words - develop a deeper understanding of consumer demand. From here, we could dare to function a bit more like futurists and predict how people might respond to developing technologies and economies (eg, if we find that people generally love access, but not density as such, then we could predict heavy decentralisation with advanced transport technologies coming on line). But even then our guesses could of course only be loose.

CityScope Consultants did do some exploration about what people feel and about living in medium density housing and why they do or do not like it - in Auckland, Tauranga and Wellington -- based on listening to what they had to say. This provided some insight into their travel behaviour as well as what they think about higher density living relative to their housing and neighbourhood needs and expectations. (We looked at other research into attitudes to medium density housing as well, and summarised it in the first working paper). There is some interesting case study material in the reports. You can find them at www.chranz.co.nz/publications.html under the heading "Improving the Design, Quality and Affordability of Residential Intensification in New Zealand"

Nice post! I see you have some good points. Clearly there is an age effect (i.e. school-age and working-age populations tend do make more trips). As you have said: “simple maths”. It is not clear to me yet if there is an age regarding some suburbs/cities preference.

Good point, thanks. You are right; we cannot impose the behaviour and preferences of today's cohorts on tomorrow's. I do not act in quite the same way as my parents did at my age (and I hope they didn't act like me!)

But its a guide. We can expect the baby boomers to travel less as they age, but as the first graph shows they will still drive more than their predecessors at a similar age, and looking at data covering recent history it seems a reasonable explanation of much if not most of the car usage over the past decade. Ageing is likely to continue to drive a continuing decline (who knows at what rate?) in car use and transport generally over the coming decade or two.

Of course, there will be other influences, including public transport and higher fuel prices, but they will be acting on a changing population profile (with changing tastes and values).