Save our suburbs, save our cities
The proposition is simple, if not overwhelming.  If we want sustainable cities – however you define “sustainable” – we had better put some effort into the quality of suburban life.  We need to get over denigrating suburbs as sprawl.  That simply ducks the issue of where and how most people spend most of their time.  We need to moderate a preoccupation with promoting CBD and big centre lifestyles.  Those are places that people want visit, but not necessarily where they want to live.

Come back Jane, our suburbs need you
It’s fifty years now since Jane Jacobs’ landmark book about saving North American cities from themselves.  She argued against the prevailing push for urban renewal as displacing communities and destroying street life with motorways, car parks, and bland commercial development.  Jacobs’ writing and her activism inspired a resistance credited with saving inner city villages, helping retain the human character of large cities, and inspiring a generation of urban designers and planners.

There is no doubt that the Jacobs message took hold in New Zealand.  It’s become compelling since the crash of ‘87 slowed down the razing of inner city blocks and marked the beginning of the end of the white collar CBD.  Hanging on to what we've got is one way to stop the hollowing out.


Unfortunately, today’s call for central city mega projects on which to stake a claim to an international presence and the push for large scale CBD residential development on which to stake a claim to environmental stewardship run the risk of reversing the gains to inner city life.  High rise apartments, tracts of high density housing, and grandiose civic plans risk undermining the essence of the central city in the same way as urban renewal and freeways once did.
But that’s not what this posting is about.  The reality is that the bulk of our populations live in the suburbs; the suburbs that are growing the most; and that’s where we need to promote the capacity for people to live fulfilling lives.  That’s where today we need to promote street life and be wary of the threats posed by the new urbanists and their grand plans for intensification.


Most people still live in the suburbs
Its obvious that most people still live a suburban life.  But that doesn't seem to be appreciated by the people who plan our cities today, even as the number of suburban residents keeps growing.
Look at the three metropolitan areas in New Zealand, not big by international standards, but nevertheless reflecting an entrenched trend in the developed world – a move to decentralise.  The numbers say it all. 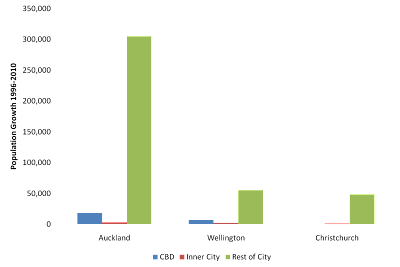 Let’s break this down a little further.  Greater Christchurch Urban Development Strategy Partners (http://www.greaterchristchurch.org.nz/) came up with a plan for consolidating the city.  This includes policies promoting central city living or living around established commercial centres and development contained largely within metropolitan limits.  Well, we can see the warning signs for this sort of thinking from the very small share of recent growth in the inner city.  It seems that the new plan is set to fly in the face of recent experience.
And if we divide Christchurch's suburbs into three groups (inner, outer, and periphery) we find the decentralising tendency that it is set against is even stronger . [2] 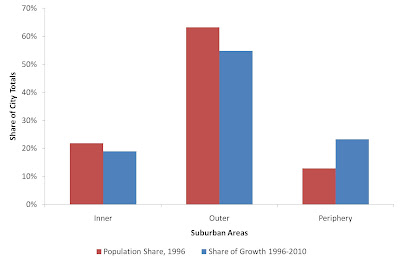 The peripheral suburbs on the city fringes have led growth rates, while the outer suburbs have led absolute growth.  (That’s if we overlook the fact that the small towns in Christchurch’s hinterland left out of this analysis have grown at even faster rates, with the adjoining districts two of the fastest three growth areas in New Zealand).
Does it make sense to stem this pressure?  Not if we want the cities to continue to grow, because the majority of people clearly favour suburban living, and that’s where the greatest capacity for accommodating them lies.

So while it’s exciting to record rapid growth rates of population gain in our inner cities, policy makers really need to make sure we are doing the right thing by our suburbs.

Places to live ...
This may mean, for example, ensuring that we don’t sacrifice too many of the green spaces to high density housing: our suburbs also need to breathe.  If we want to lift densities, then terraced units and the occasional low rise apartment may be all we need.  They are probably the most easily achieved forms of intensification in areas where consolidating sites is notoriously difficult and where existing residents will fight to preserve existing character.

Better still may be judicious development of greenfield sites, where we can boost densities by applying the principles of Smart Growth without destroying what people value about what went before, without overloading existing facilities and infrastructure, creating attractive public and private realms, and potentially enhancing rather than trashing biodiversity, water and air quality.

We will also need to promote neighbourhood centres to ensure that they can accommodate diverse activities and services, that they are easy to get to and get around, well appointed and vibrant.  They may even become the focus of modest park and ride facilities, the framework around which flexible public transport within and beyond the neighbourhood can best be delivered.
It may be timely to review what in our planning provisions force people to make regular cross-city journeys to work, and whether this can be changed through more decentralised employment.

Places to play ...
While local centres are becoming the focus of community and neighbourhood commerce and culture, suburban parks and gardens will also have a role to play.  We need good spaces close to the majority of homes for sport and recreation, and safe local places for families and children to gather.


We might more actively protect some of the informal spaces in our suburbs, and take a broad view of what constitutes heritage in doing so.  We may have to protect landscapes and structures because they are iconic in local areas, not because we believe they may have national or international significance.  Where they don’t exist, we may even have to create the landmarks, the parks and town belts, and the structures that reinforce local identity and culture.
Strong suburbs for a strong CBD
By allowing more things to happen in the suburbs without overloading them with bland residential development or tracts of mixed use that fall between urban design stools, we have an opportunity to advance the planners’ live-work-play mantra, and to enhance the sustainability of our cities.

Ultimately, it is the quality of day-to-day life in a city and its capacity to attract and hold skilled and motivated people that will determine its prosperity.  And it is those people and that prosperity that will underwrite the health of the CBD.  Without strong suburbs, we cannot sustain a strong CBD.

[1]            For this exercise, the following council areas were counted, Kapiti, Porirua, Upper and Lower Hutt, and Wellington City.

[2]           This classification omits the largely rural Banks Peninsula which is quite separate from the metropolitan area.
Posted by Phil McDermott

hear hear - suburbs are a key element of our quality of life.
one issue on growth that always gets ignored is the number of bedrooms......The central planners are focused on apartments/terraced housing, and lose site of how many people actually occupy the area.

In some plans they replace 4-5 bedroom bungalows with a couple terrace houses ....and end up with the same number of bedrooms! and think they've allowed for growth.

I looked at Kingsland census figures a while ago - as people said it was a growth area with several new apartment blocks. In fact it was pretty static over 20 years. high density Flats had given way to couples renovating, and then some children growth - but the several hundred in apartments just made up for rooms lost from the flatting numbers as young couples lived in the houses.

The key to the suburbs, in my view is to maintain them as they are, and to allow retirement apartments to be built in an area - which should encourage older people out of the 4-5 bedroom properties, but still allow them to remain in their suburb.
That's the comments I get from 50+ yr olds in Mt Eden/Mt Albert, is they want to remain in the area, but could see themselves going for quality low maintenance - but don't want it to be out on the fringes....