Redrawing the population map
The Christchurch earthquakes not only raise questions about the design of our cities.  They also remind me of some wider questions about New Zealand’s settlement dynamics.
In 2008 I examined Census data from 1986 to 2006 which suggested that there was a change going on in New Zealand’s population geography.  Among other things:
... expectations founded on “the drift north”, slow growth in the south, structural disadvantages facing Wellington, rural depopulation, and the primacy of Auckland have had their day.
In particular,
“the resurgence of the second tier and provincial cities, the revitalisation of the rural periphery around the major urban areas, and the burgeoning of lifestyle settlements, both in the shadow of the metropolitan areas and beyond, are new facets of New Zealand’s population geography. ...
And
“this movement is likely to boost small towns and secondary cities ... rural areas and coastal settlements.  It will be sustained by increasingly dispersed employment, supporting a combination of new investment in rural areas, in consumer production and services in non-urban areas, by businesses seeking the lower costs and increased employment stability associated with smaller centres and lifestyle localities, and new investment in the primary sector”.
While these changes are unlikely to fundamentally change Auckland’s primacy they will have a significant impact on our secondary centres, our townships, and rural settlements.  They are consistent with what is happening in other developed nations as they too move beyond the limitations of industry-driven growth focused on large urban centres.
Update 2010 – what areas are growing?
It seems timely to see what has happened since 2006.  Statistics New Zealand has published June population and February employment estimates for New Zealand’s local authorities through to 2010.  Let’s look at what they tell us.
First, I ranked areas according to population growth rate over the four years.  Figure 1 plots the 25 fastest growing areas.  The squares (and redline) show rates of growth (the right hand axis).  The blue bars show the population gained (the left hand axis).

Auckland continues to dominate, although even here change is evident.  Auckland accounted for over three quarters of New Zealand's growth between 1996 and 2001.  But since then it has dropped to under 50%.  This is still a dominant share, but its fall reflects growing numbers of Auckland residents moving to other parts of New Zealand. 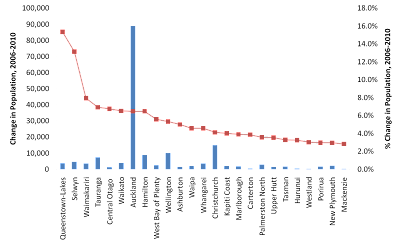 The most interesting things to emerge from this update, though, are the more rapid growth of South Island localities, the resurgence of some of the secondary centres previously battered by rural restructuring, and the rapid rates of growth on the urban periphery (Waimakariri and Selwyn near Christchurch, Kapiti Coast near Wellington, and, not shown, Rodney and Franklin in Auckland).
In the North Island growth in the Bay of Plenty and the Waikato regions continues to lead the way, although as noted in the Bay of Plenty Times recently this has been threatened in Tauranga by high housing costs, leading to a potential rethink of the Smart Growth Strategy there. Hopefully Hamilton will heed this warning before it too plunges down the path of rationing land and thereby lifting the price of living and doing business there.
Employment Growth
Repeating the exercise for employment reveals even more interesting trends which could reinforce emerging shifts in New Zealand’s population map.  First, the recession hit Auckland hard, with the city-region failing to record any net gain in jobs in 2010 compared with 2006.  The North Shore and Manukau recorded growth – although both under 2% – while the old Auckland City dropped around 7,070 jobs (-2.3%), reminding us of the fallacy of relying on agglomeration as the panacea for tardy economic performance.  (This was discussed in more detail in my posting of 3 December 2010).
Figure 2: Fastest Employment Growth Rates, Local Council Areas 2006-2010 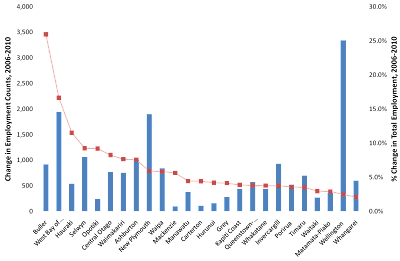 Of the major cities only Wellington features among the fastest growing areas, and its gains were driven almost entirely by the expansion of the public sector, something hardly likely to persist.  Like Auckland, Hamilton, Dunedin and Christchurch took significant knocks to employment.
New Plymouth performed well on the back of boosts to farming and energy development, and gains in manufacturing.  Other secondary centres like Nelson, Palmerston North, Napier and Hastings, although not in the top 25, at least managed some growth.
Again, though, the performance of rural areas, the South Island, and small towns stands out.
Overall, there is not a lot of obvious alignment between where jobs expanded and population grew. I suspect that we will see more significant shifts in New Zealand’s population map.
To confront or accept change?
The changing map of population and employment reminds us of our dependence on the rural economy generally, and indicates the growing attractiveness of secondary cities, small towns, and the urban edge.  Restrictive land use policies in our main urban centres of growth may be beginning to bite, so that people – and businesses – are moving out.  Not en masse, but enough to make a difference, especially to the areas they move to, and perhaps lowering the long term growth prospects of the metropolitan centres.
(Another interpretation is that the changes simply reflect people’s preferences, or that they still follow job opportunities.  Whatever the cause, If this movement becomes stronger we won’t need policies to contain our cities for much longer!)
The events in Christchurch will shake this picture up further.  We can expect continuing dispersal of population one way or the other, to small towns, provincial cities, and beyond.
On a positive note the trend to small centres could offer a potentially new and reinvigorated future for New Zealand focused on the natural qualities of the country and the intimacy, community, and creativity of small places, while allowing our larger cities to mature without the pressure of unrelenting growth.
It may be time for the planners to think more about how we might cope with a new pattern of settlement rather than desperately trying to reinforce the old one.  It no longer makes sense to project the past into the future, and applying planning policies developed in the 1980s to the challenges of the 2020s.
Posted by Phil McDermott