In what sense a region? Drawing a line around economic development

Unleashing the spatial plan
Auckland’s Spatial Plan is intended to help shape the city/region’s future development.  The council has just-released a Discussion Document to engage the community in its preparation.
It’s an ambitious document that goes well beyond discussing just land use and infrastructure.  The Auckland Plan is proposed as a blueprint to transform the region into “the world’s most liveable city” and “the economic powerhouse of the nation”.
This focus raises questions of just where the city’s economic borders begin and end.  In what sense is Auckland City with its sprawling borders a discrete economic unit?
Inclusiveness – where do the neighbours fit in?
Among many other things, the discussion document acknowledges that “Auckland is also part of an emerging northern North Island urban and economic system – a cluster of cities and towns north of Taupo (Hamilton, Tauranga and Whangarei)”.
This, it says, calls for “a strong planning and policy relationship” with adjoining regions and ”an inter-regional agreement for the upper North Island ... to cover land use, planning, infrastructure and a range of other issues”(p21) and that it is “essential to develop inter-regional transport links to support the burgeoning Northland, Auckland, Waikato and Bay of Plenty urban and economic systems” (p48),.  It also notes Auckland’s dependence for some services and resources on the Waikato region.
But that’s about all it says about these key relationships in its 220 pages.
At a seminar of the Institute of Public Administration this week, Hamilton Mayor Julie Hardaker said that this was not enough.  She pointed out the economic significance of her region, the Waikato, as the heart of New Zealand’s dominant dairy export sector for example.
Mayor Hardaker also reminded us that what happens to Auckland’s land use influences what happens in other cities in the Northern North Island.
Hamilton, for example, has had rapid investment in light industry, warehousing, and distribution around its northern gateway over the past 10 to 15 years.  This is a cost effective location for accessing a wide market, including Auckland.  The resulting investment in Hamilton has been boosted by a shortage of reasonably priced industrial land in Auckland.
In a similar vein, Tauranga and Whangarei both receive significant population contributions by way of migration from Auckland (as detailed in Margins Matter, p18).
Auckland as a regional centre
The notion of inter-regional integration is not new.  Auckland’s original growth was driven by the output of its resource-rich hinterland.  It also came to enjoy prosperity as an import substitution centre through much of the last century. That role has almost disappeared today.
More recently Auckland has prospered as a centre of consumption. Nevertheless, the city continues to depend for much of its income on that hinterland, and on providing services to trade and business in the northern North Island.
Much of the value added in the processing of primary output from this “region of regions”, especially food products, happens in Auckland.  The city is also the hub of many financial, business, and technical activities that service the resource-based industries of the northern North Island.
Even the much vaunted “marine industries” value added cluster associated with Auckland reaches deep into the neighbouring regions with their skills and marine infrastructure.
Four into one might just go
Equally important is the cumulative economic capacity, infrastructure, and resource base of this extended region, a region which we have argued for some time may be the best level at which to plan for regional economic development in a globalising world (see, for example, our report to the Metropolitan Auckland Project in 2006). 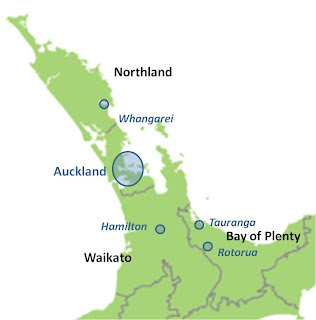 Taken as a whole, the northern North Island has substantial fertile grasslands, horticulture and arable land, forestry, and associated processing industries.  It has a wide range of mineral deposits.  It has good energy resources with high levels of current and potential renewable energy.  Its marine resources are extensive.  It has specialist concentrations in research, scientific expertise, and education that when considered jointly are of international substance and offer the potential to substantially lift the value of New Zealand’s exports and expertise.
The fortunes of the ports of the northern North Island -- Auckland, Tauranga, and Whangarei -- are connected by ownership links and by a degree of complementarity in their respective trades.  As internal transport costs increase and as shipping companies rationalise international movements the regions’ (and country’s) interests might be best served by more collaboration among them.
And this might be the catch cry for relationships among the councils of the region: more collaboration.  Because if we really believe the rhetoric about globalisation and world cities, New Zealand will only succeed if it digs deep into what are ultimately finite physical, human, and capital resources.  Administrative boundaries should not define or constrain the definition of a region within which we identify how public policy and investment might best support economic development.
Decentralisation is happening
Sure, Auckland remains dominant in the area, as it is in New Zealand, and it will remain so.  It accounted for around two thirds of its jobs in 2010, and 60% of job growth over the past decade.
However, the 6% difference between these two numbers hints at a degree of decentralisation.  This is confirmed in relative gains (or losses) in employment between 2000 and 2010. The three other regions had better growth rates than Auckland.  The best performing urban areas within the northern North Island were Tauranga, Hamilton, and the urbanised area of South Auckland (Manukau and Papakura).
Source: Business Statistics, Statistics New Zealand
And as manufacturing slipped into the negative under the pressure of cheap imports and then global recession, Auckland led the way down.  The figures in the table include the negative impact of the post 2007 recession: until 2007 manufacturing was growing everywhere but Auckland City, led by the Waikato with 16% growth as Auckland Region stopped growing.
Working together
If it wants to tackle economic matters, Auckland can ill-afford an inward focus.  If it wants to micro-manage land use, it may also pay to look hard at the opportunities that the wider region offers.  And if liveablity is how we define Auckland’s place in the world, it cannot afford to exclude from the portfolio the qualities of the smaller centres, their rural settings, mountains, and coastal hinterlands.
By avoiding being locked into an administrative construct with only limited relationship with what drives Auckland’s growth the Mayor can play a leadership role in economic development that can make a difference.  But it’s time to lead the city beyond “better because we are bigger” and reflect on what it really means to be connected in today’s world, starting at home. 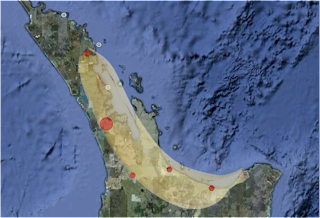 good post
I get tired of the :auckland drives nz economy" - both from old banks and now Brown.
It is jusy an integral part of teh economy. It houses inputs to elsewhere eg international CA/Legal firms/insurance that all of NZ use.
It's "consumption" side isn't really anything to be proud of.

rail links to Hamliton, with southern industrial land is the sensible next step.

Tauranga port is far better run, as doesn't have the ongoing constraints.

This natrural development south will occur anyway - already good schools going in, and good lifestyle choices southern side of the manakau harbour.

Due to land cost / cost of redevloping vs the benefits of cheaper land and design/build, new industrial areas will be driven by economics and not centralised planners....

Phil, interesting perspective. I wonder if we should reconsider the Auckland Province (abolished in 1876).

Interesting thought.
Too many years ago (the mid 1980s) we were involved in trying to determine natural communities of interest for a media organisation. With help from the very knowledgeable Brian Marshall from the then Geography Library at Auckland University, we compared a wide range of regional divisons used by government departments, non-government agencies, interest groups and the like and relevant statistics to see where there was convergence or overlap. Interestingly, we found that the old provincial boundaries seemed to reflect regional communities of interest best. But the only agency still using similar boundaries was the New Zealand Rugby Union. Maybe some things never change. Or maybe they do - its interesting, too, how the Super 15 franchises have shaped up in terms of territorial communities of interest providing the local framework for trans-national engagement.

Phil,
Indeed, the new, united Auckland is not only about the super-city, it also about the super-region. From Whangarei to Whakatane.
In a report I submitted to the council in February I argued that the entity that really needs to be planned in the very long term (2030-2050) is the northern North Island 'banana'.
I will email you the picture; perhaps you can post it.
This idea is in fact 15 years old; I first presented the 'banana theory' of the future of urbanisation in NZ in a lecture to the Waikato Geographical Society in 1995 (will send you that picture too!)
--Dushko

Thanks, Dushko.
This thinking raises interesting questions about how we think of urbanisation, emphasising connection, continuity and common interests when we think about trade and economy. That's not to detract from the role of localism when we think about culture, character and community (and sporting rivalries!) Presumably urban design and land use planning have to reconcile tension between local and (super) regional.
.
I have placed your image at the bottom of the blog.