Auckland Light Rail – Sinking a Tunnel or Sinking a City?

Light Rail: A solution in search of a problem

Auckland has seen that the creation of commissions, teams, or working parties to implement simple-minded solutions to complex problems allows little room for debate on alternatives.  Like the creation of the supercity and Auckland’s Central Rail Link, the proposed CBD to Airport tunnelled light rail is a solution in search of a problem.

In Tuesday’s NZ Herald economist Tim Hazledine strips Auckland’s congestion problem back to basics. He raises some facts that seem to have been overlooked: the limited nature of the problem, the availability of congestion pricing to resolve it, the changing of CBD work, the low utility of a service stopping at 18 stations over a short distance, and Auckland’s “topsy turvey topography”.

There's not a lot to add to his critique, but here’s some more on the environmental issues and changes in Auckland’s growth, both of which render the LRT already obsolete.

In 2019 Auckland Council declared a Climate Emergency. In January 2022 the Government announced new light rail (LRT) from the CBD to Auckland Airport, flying in the face of that declaration: risk maps (1) put the LRT terminals, the airport and the CBD’s Western Viaduct, below the annual flood level before the end of the 60-year horizon used to justify it. 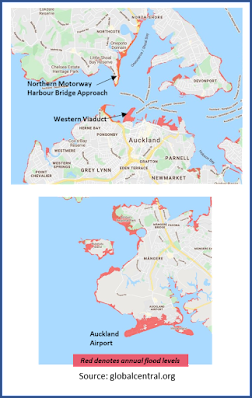 Even without sea level rise and with heroic assumptions about Auckland’s growth (more on that below), the project makes no economic sense. An abysmally low return, the likelihood of delays, and inevitable cost blowouts will undermine productivity.
And on the environmental front, tunnelling and the demand for concrete and steel will boost medium-term CO2 emissions despite the declared climate emergency (2).  The project may not even achieve a net greenhouse reduction before flooding at both ends of the line stymies its operations. (3)

So, there is an elephant in the tunnel.

The new crossing will  parallel the Auckland Harbour Bridge and share its northern approach. Unfortunately, this portion of State Highway One road already floods in severe storms. Given that it will flood more frequently as the sea level rises and storm events increase, the planned crossing will do little for network resilience. (4)

(We should mention that there is already a second crossing. Between West Auckland and North Shore, it will not be directly affected by climate change because its approaches are well above sea level).

Acknowledging a Climate Emergency should lead to reconsideration of urban form and infrastructure to deal with the structural drivers of emissions. Current plans for excessive public investment will provide disproportionate private benefits to the small minority of Auckland’s households and businesses that benefit from the operation of fixed-route, heavily subsidised  transit services. Turning attention, instead, to land use and the relationship where most people live and work (which is clearly not the CBD) should lead to more much equitable urban form and investment outcomes.

The government, the council, and its agencies should be revising their long-term plans to recognise the reality of climate change and shifting urban form, and aim to reduce transport demand without penalising mobility. Instead, their aim seems to be to cement in historical city form in the face of unprecedented climate change .

The plans will seriously disrupt lives and, through poor use of capital and crowding out better investment, undermine productivity. On the plus side (?), they should sustain an oligopolistic civil engineering and infrastructure sector and prop up CBD and on-route property values.

Incidentally, climate myopia is not confined to the public sector. It’s fascinating to see businesses taking up new, ”green” commercial space in downtown Auckland’s future flood zone, while vacancies increase in the elevated uptown offices they are abandoning.

Auckland at a tipping point

We need to acknowledge another elephant.

With Covid people think about a new normal in terms of public health. Equally significant, though, Covid has accelerated shifts already changing Auckland’s growth path. Consider the combined impacts of:

·         A cyclical downturn in immigration, which commenced in 2018, accelerated under Covid;

·         A wage-disadvantaged economy will prolong the migration deficit beyond the “Covid effect”;

·         Land, service, and congestion costs leading to the decentralisation of industry;

·         Changes in attitudes to work, careers, and lifestyle reshaping how and where people want to live, and where and when they want to work;

·         Technology changes in the distribution of goods (bar codes, robotics, consumer-focused logistics) and services (decentralisation and democratisation through IT and AI);

Auckland is unlikely to grow to match the bullish projections used by the current crop of city planners and builders.  Nor will urban design based on debatable assumptions about where people should live and work.

With or without climate change, it is time to ease over-investment in that ageing tiara, the city centre, and put more into our scattered diamonds, emerging urban villages, and our pearls on a string – the centres of Wellsford, Warkworth, Drury, Pokeno, Tuakau, and the like – north and south of Auckland.

It is time to focus investment on the infrastructure and amenity needs of a range of urban centers rather than on mindlessly sinking public funds into the CBD. This means developing and maintaining well-balanced, localised land use and services. On the transport front, decentralised investment can facilitate more active travel options and demand-based vehicle sharing. Flexible bus options can operate both within and between centres, the latter on strong corridor connections among them.

Fortuitously, supporting dispersal within and beyond the city means spreading the risks associated with climate change and adopting defensive rather than intensification strategies on the waterfront.

Dealing with the risk of climate change

Of course, that’s just an opinion from outside the tent.

But here's my take on these diverging scenarios in the form of a risk/regret matrix.  The risks (“How likely are the climate change projections?”) fall on the vertical axis, the planning options on the horizontal axis (“Which development path shall we take”?) 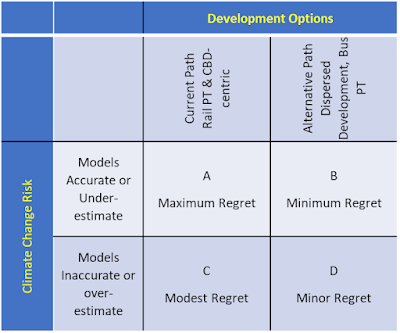 The case for changing direction

The current investment path (which leads to cell A or C) looks wrong.  If we stay with it and the models are about right, we will write off a lot of investment and lower our ability to react to the impacts of climate change (Cell A). Even if the climate settles, we may still look back with regret at misplaced and under-costed commitments (Cell C).

If, on the other hand, we shift to dispersed and flexible investment and the climate remains benign (Cell D), we would at least have a policy framework that should cope well with slower growth and reduce inequities within the city.

Finally, if we are fully exposed to the rigours of an unstable climate, then catering for dispersed development and opting for flexible public transport would provide the resilience and capacity to bounce back from climate disruption (Cell B).  The consequences of climate change may not be pleasant, but we will be better placed to deal with them. There will be regret – it’s too late to wind back the climate change clock – but we will have done our best to minimise it.

Globally, the money-printing presses are grinding to a halt. The prospect that inflation will ease central and local government deficits will be offset, in part, by rising interest rates.  Money is no longer free, or debt without consequence. The case for major transport projects must be robust rather than shaky, definitive rather than indicative.

Proceed with the LRT and Auckland’s Climate Emergency will generate a fiscal crisis and see the integrity of Auckland’s infrastructure undermined as the promise and pressures of growth diminish, fiscal and financial liabilities increase, and the sea encroaches.

[4]              Flooding could be offset by extensive and expensive raising of the road (State Highway One), some of which will       be needed anyway to keep the existing bridge functional. Expanding it at the same time, over 8km of vulnerable           shoreline, raises a whole lot more issues (and costs). though.