There is an interesting if depressing narrative emerging in a number of independent stories about Auckland's passenger rail aspirations, city centre hopes, and spatial plans.   This posting aims to string together just some of the bits - with links.

The recent announcement that Auckland Transport is going to acquire 210 inner Auckland properties (or is that 280?) to preserve the route for a rail tunnel with no assured funding suggests that politicians and planners in this city – and their plans – are a couple of steps removed from reality, committed to an inner city rail tunnel at almost any cost..

At what cost?
It’s noteable that when councillors start lambasting officials for their tunnel costing, or propose a tax on motorists to pay for the project, they say nothing about and the history of over-runs associated with Think Big projects and the contingencies – including delays – that history tells us have the capacity to double the costs of large civil engineering projects.

And they seem fixated on a tunnel without addressing how ongoing rail operating losses after completion will be met, or the costs attendant on the ancillary road works, the parking facilities, and  other above-ground spending on existing and proposed stations necessary to get people on board.  There is also the cost of the electrification  ($500m already advanced  by taxpayers for electric units, quite apart from line costs) required simply so that we can run trains underground.


So far, then, it has been difficult to get a picture of the  total costs of this project.  Arcane debates between politicians and officials about how to factor in the impact of inflation over a project which it is conceded will take some time to get underway, let alone completed, seem rather incidental in the bigger picture.

Why is this city – today's and tomorrow's ratepayers – going along with a high risk, low return - and somewhat opaque - gamble?  The risks are all on the downside.  For a start, incremental investment decisions based on broad  estimates are bound to escalate the costs of a project of already doubtful merit.

The reasons, we are told, lie in the benefits of better access to and promotion of the CBD, reduced road congestion, better connectivity between the south and the west of the region.  Let's revisit those reasons.

Cross-regional connection - L
Dealing  with the last first:  journey to work figures from  2006  show that only around 1.3% of all motorised commuting trips (a total of 4,700 by bus, car, rail, or motorcycle) were between the west and south of the region. So cross-regional connectivity hardly goes any distance towards justifying the tunnel.

In 2006, 7% of commuting trips from the west to the Inner City were by train – around 560.  Let’s say that increases 5-fold or thereabouts as a result of a more direct route (putting aside, for the moment, the time associated with  additional stops at new stations).  That’s perhaps 2,500-3,000 trips.  Again, the marginal cost of these additional trips looks pretty high.

And with recent investment in road and industrial land  developments in the west of Auckland a much more sustainable strategy would be one that fostered more investment and greater work opportunities closer to home.  This is consistent with the expectation in the business case that many of the additional workers in and around the CBD will also live there.

So cross-regional commuting hardly makes a compelling case for the rail link.

Reduced congestion L
There is an expectation that even making a marginal difference to car traffic will reduce congestion.  That ignores the experience: road capacity gained by transferring commuters from bus or car to rail is simply absorbed by the reinstatement of trips that would otherwise have been deferred by peak capacity constraints.

More than that, we are now seeing the benefits of considerable spending on roads in the past by way of reduced congestion anyway, something that could easily undermine  rail patronage forecasts.

And we can look forward to even more gains on that front as more people work from home, an ageing population reduces its use of cars, and long-term increases in fuel prices lead to more rationing of car use by households.  These benefits come at virtually no public cost – and are likely to be collectively a lot more beneficial than a costly (but still limited) increase in the capacity of the passenger rail system.

All the big boys have one L
Of more immediate interest is why we would be expecting to generate greater demand for rail transport to the CBD.  Several reasons have been advanced. One is the old  Me Too chestnut.  The big cities we are familiar with – Paris, London, New York, Sydney  –  have metro rail serving the CBD using underground systems.  We want to be one of the big boys.


Of course, we start well  behind the eight ball.  Cities with "successful" metro rail transit also have populations many times that of Auckland.

Even so,  metropolitan rail in large cities still runs at a loss despite long-sunk capital costs, higher population densities, and vastly more employees in the central city. Take New York’s Metropolitan Transport Authority, for example. 43% of revenue comes from taxes and subsidies, another 12% from tolls; and just 43% from fares. Railcorp, responsible for passenger rail transport in New South Wales, including Sydney’s CityRail, lost $2.5bn prior to state government contributions in 2010-11.   Travel for London reported an improvement as a result of increasing trips numbers: to 1.2bn from a loss of £626mn in 2010 to £100mn in 2011/12, or close to £3.60- for each of its estimated 28milion passengers on the London rail and underground. And on top of these losses are substantial ongoing capital costs.

It’s hard to understand why we should emulate these systems.

Boosting the CBD L
The Auckland Plan makes much of the CBD as  the key to Auckland's international standing.  The new rail loop is seen as a critical part of that.

This is based in part on the expectation that many more people would live and work in and around a series of new stations to  be built on the proposed inner link. As I have suggested previously, there is very little we might see in the development of future labour markets or even housing preferences that suggests that the inner city will hold a lot of appeal or achieve the sort of growth proposed in the Auckland Spatial Plan. The business case for the rail (and the spatial plan) presents outcomes underpinned by implausible drivers.


Laying Waste
In the meantime, let’s think about the impact of acquiring 210 to 280 properties on the possibility that they are  required for tunnel construction. We know how the acquisition of land for motorway construction in the 1950s and 1960s laid waste to swathes of inner-city land for decades, here and overseas. We can look forward to that on a putative rail corridor from Britomart to Mt Eden for who knows how long. 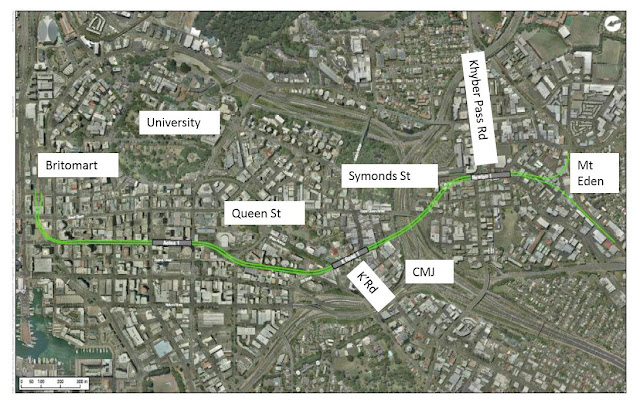 And the disruption this will cause goes beyond the cost and inconvenience to current owners who have invested in inner-city businesses and inner-city living.  This will be no doubt lead to a long and contested consultation programme.

But what will happen when  this land  is acquired?  One possibility might  be a range of quirky, interesting, temporary activities occupying low rental ageing properties. But that's not likely when we are dealing with a corridor.

Another - more likely - is that it simply goes to waste, becoming a  ribbon of vacant, deteriorating buildings cutting through the inner city.   Already Aucklanders are wringing their hands over the booze-ridden late night culture, and “a deluge of rubbish” hitting inner city streets. Creating a corridor of waste land will not help.

The real and immediate problem faced by Auckland's  inner city is not one of enhancing access. It is a problem of credibility; of maintaining the quality in a place where its appeal as a place to visit (at least after dark) and live is already under threat.  Locking the city into the rail tunnel is not the way to tackle the long-term prosperity of the CBD and surrounds.  This is a much bigger issue – and not one that should be obscured by desperate defence of a flawed project.

Phil
the key issue is they have half a project / and a lot of nice words. they seem to have no idea how the network will actually operate, and just make assuptions about increasing capacity.

the actual figures seem to show a very small increase to CBD of around 6,000 people in the am peak. So 6000 out of maybe 800,000 traveling in am peak is worth 2.8bn??
But then parts get worse - they've now dropped in a new "interchange" at Dominion Rd - which means the 40% of western line users (about 2000) who go to Grafton and Newmarket (and then south), have to get off and chnage platforms/trains! You won;t see their extra times anywhere!
they also don;t understand the CBD - and the education sector / building grades and use incompatibility. Foreign education does not work with normal office use. hence their Aotea station is in a wasteland of aprtments and foreign student/education. All staying in CBD.
K Rd and Eden tce have bery little growth potential, and real growth in CBD is further west at Wynyard.....

Planners are determined to retrofit the city to make rail viable and assume that the CRL will be the silver bullet that will make us all want to live in high rises and jump on trains.
Reality is work and education trends are towards more decentralized and remote access workforces and campuses.
CRL would have been a good option a long time ago but its time has passed.
Instead of getting into a debt spiral to fund a nice to have CRL Council needs to focus on need to haves. Fixing the stormwater system would be a good place to start.

Which would be connected (or rather have running underneath it) by the Second Harbour Crossing that holds both road and rail. Thus if the rail runs under Wynyard Quarter on its way to the North Shore for the North Shore Line (2032 anyone?) then someone might plop a station there to connect with it.

Therefore for a North Shore Line which could carry upwards of 800% more than the Busway ever could would need the CRL to link it back up with Britomart.