In my last blog I suggested that it’s time for a rethink of Ports of Auckland Ltd’s (POAL) plans for expansion. The current plan cements in a commitment to a critical downtown location by continuing to promote stepped investment, including substantial further reclamation.  The analysis of demand behind the plan seems too slight in content and too inflated in expectations to justify this costly long term commitment and the prospect of a four-fold increase in port related rail and road traffic.
Today 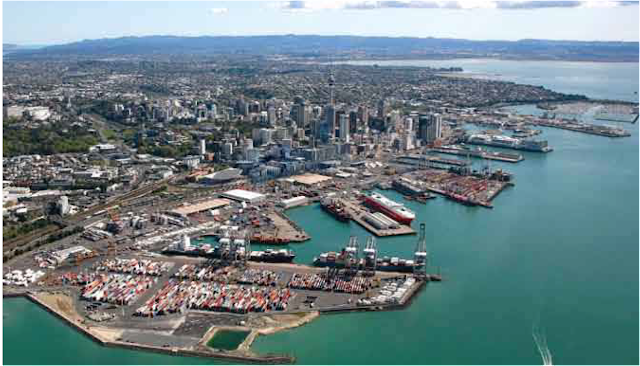 Debatable assumptions
We are facing a period of unprecedented post-war change to the economies of New Zealand and our trading partners.  Who knows what the configuration of goods crossing our ports will be in 20, 30, or 40 years’ time?  Or the sorts of demands that might be made on some of the city’s most valuable real estate - currently occupied by a transport operator?   Obviously an efficient port is critical to New Zealand’s trading future, but that might just be why it is also important to consider radical alternatives: to achieve the efficiencies and flexibility that uncertain and challenging times demand.

This post provides a few more numbers to suggest why the POAL view of the future may be a little narrow .  It also proposes an alternative – no doubt just one of several that might be considered to promote the evolution of the nation’s long-term trade.

That means its share of national trade has fallen.  I saw no analysis of the reasons for this in the port plan.

In fact, if we think about it, its not  necessarily bad news.  For a start, Auckland’s sea trade is of a higher  value than elsewhere; between 1989 and 2011the unit value of its exports grew by 29% (in nominal dollars) compared with just 8% elsewhere, to reach $3,800/tonne (compared with $1,300/tonne). A  regional focus on higher value exports was reinforced  by the growing freight role of the Auckland International Airport which today accounts for 12% of New Zealand exports by value, and 21% of imports.

Also, Auckland seaport still takes a large share of national  imports reflecting the region's twin roles as centre of consumption in New Zealand and as a trans-shipment point for imports to other parts of the country.

Nevertheless, if more trade is being channeled elsewhere it suggests that there may be other options for growth which are less likely to adversely impact on Auckland's valued harbourside.

Looking to the wider region
Take a look at what is happening elsewhere in the northern North Island.  The ports at Tauranga and Whangarei have grown faster than Auckland, and today jointly account for a larger share of exports by value and tonnage.  Whangarei is, of course, a special case given the role of shipments to the oil refinery.

Responding to structural change?
These figures hint at an emerging specialisation.  Over the past thirty years, the primary processing industries on which Auckland’s export trade was built have moved out.  Consequently, the downtown port is a bit of an anomaly.  The migration of export trade to Tauranga simply reflects an adjustment in traffic to the changing geography of production.  As higher fuel prices bite, and the overheads of overloading Auckland's transport system increase, there may be good reason to act to sustain that trend.


Manufacturing has changed, too. The import-substitution industry which grew so strongly in Auckland between the 1940s and 1970s has been dismantled by a lowering of trade barriers and by the impact of the new manufacturing culture of North and Southeast Asia.

Today Auckland has a smaller number of specialised, hopefully more sustainable manufacturers.  Some of these do, however, rely for expansion on efficient channels to international markets.  Its is incumbent on the POAL to make sure it responds to their hopefully growing needs.

Is more specialisation an answer?
Of course, our analysis needs to delve deeper before we can be confident about the possible effects of ongoing structural change on the composition and volume of future trade.  But even the crude figures here suggest that there is an opportunity for greater specialisation and consequently more intensive and productive use of the assets of the three northern ports.

For a start, a strong focus on value-based trade through Auckland seaport would enable the company to do more with less.  At the same time, fully exploiting its inland port sites as consolidation and break-down points for these and other more traditional trades should ensure that they too play a full role in integrating and streamlining internal and international transport.

Tauranga has boomed as a result of a booming rural sector – both by importing inputs and exporting products.  As a gateway to New Zealand’s most productive hinterland – the Waikato, Bay of Plenty and central North Island – we can expect this role to grow.  And if New Zealand’s trade future really is just “more of the same” as implied by the exponential growth on which the POAL port plan is based, then Tauranga  is an  obvious choice for  investing in the capacity to service the primary sectors and associated processing industries as these sectors expand, diversify, and intensify their output.

Whangarei’s long-term role is more speculative, but it possesses an underutilised port which can readily adopt and develop best practice commodity handling, as it has done for forestry.  There may also be real value in shifting lower value and bulk trades from Auckland’s downtown to Whangarei’s Northport as a means of extracting the greatest value out of both.

Beyond the horizon: the logic behind Northport
Playing to and building on port specialisations would exploit existing investment in inland port operations and boost the productivity of any new investment across the entire transport chain.  It would probably require the rail link between Auckland and Whangarei to be upgraded and the Oakleigh extension to Northport at Marsden Point to be built.  This can probably be justified  anyway for the additional capacity it will provide on the  highway between Auckland and Whangarei by removing bulk traffic.  And by providing a sound alternative to  Auckland for high volume, low value trade  it will avoid  costly reclamation there, and help sustain the quality of Auckland's waterfront.

The potential development of a new nearby Marsden City and the solid industrial base associated with the oil refinery mean that more trade and investment at Northport could play  a major role to play in  freeing some of Auckland's  harbour edge  for higher value uses.

Radical change calls for lateral thinking, and integrated action
This is just one option.  But looking at it – and others -  seriously might begin to meet former POAL board member Rob Campbell’s concerns about the narrow thinking that promotes incremental change at a legacy port as a way to cater for apparently undifferentiated volume growth - regardless of the wider costs.

Of course, any such suggestions may call for more than rethinking where and how different goods are shipped in New Zealand.  Perhaps the existing owners and operators cannot work together to extract the best out of their investment (for shippers or shareholders).  Perhaps current governance and ownership structures make that too big an ask, as suggested  by the Productivity Commission.

An important  part of the answer may lie in the emergence in New Zealand of an organisation -- or organisations -- capable of integrating and managing the flows across all modes to the advantage of individual trades, regardless of the ownership and management of individual components of the transport infrastructure. Actually, integration in response to globalisation is  not so radical, even if the notion of working together may be anathema  for some of  today's port players.