Restricting retailing to save the CBD

Resisting decentralisation
In my last posting I argued that planning for a hierarchy of retail centres simply protects the interests of a few landlords, investors, and operators.  Regulating to retain the status quo of centres stifles retail investment and productivity without necessarily improving the city and town centres it aims to support.
In this posting I look at what’s happened to Auckland’s retailing over the past decade.  Here the argument for preserving an established retail hierarchy has prevailed in plans that rely on directing growth to existing centres as one way of promoting a more compact city.
Despite this, it seems the forces of decentralisation have prevailed.
The data
I have looked at 15 retail and leisure sectors using Statistics New Zealand employment figures for 2000 and 2010.  I have grouped Census Area Units into eleven categories to explore changes in location.  This involves some imprecision in area definitions but the figures still tell a pretty compelling story.
The big picture
First, look at changes in retail and leisure employment in different parts of the region (Figure 1).
It was up 11% in the CBD; but in “out of zone” industrial areas it was up 46%.  Rural areas were up 59%, although we are dealing with much smaller numbers here.

The biggest absolute gains were in suburban centres (up 39%, insofar as as they could be isolated through Census Area Units).  The middle and outer suburbs fared pretty well, too (up 22% and 26% respectively).  Major centres lagged (4%).

Figure 1: Sub-regional Employment in Retail and Leisure Activity, 2000 and 2010 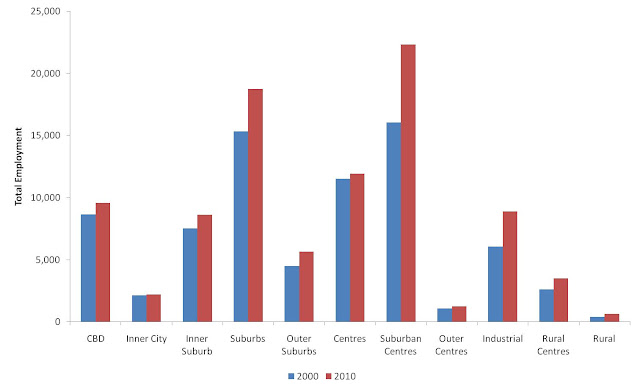 The significant changes taking place in the distribution of retail and leisure activity raise some interesting questions.
How far can retailing – in which employment actually fell by 7% in the three years to 2010 – be expected to prop up the CBD?   Does planning actually undermine retailing by constraining investment in favour of the CBD and centres?  Or has it simply been ineffective, with retailing and leisure expanding where they can achieve superior performance regardless of councils’ objectives, favouring more dispersed sites?
Changes in retail mix
When we look at the changing retail mix we begin to see why the CBD and major centres fared poorly over the decade.  There have been big differences in growth among subsectors (Figure 2), suggesting that the shops we plan for tomorrow will not be the same sorts of shops (or leisure activities) planned for today.
Cafes, restaurants, and take-aways have maintained their dominance.  They were the biggest sector in 2000 (28% of total employment in retail and leisure) and grew 32% over the decade.  Hence, eating out accounted for nearly 40% of all growth.  Did our centres-based planning anticipate that?
And look at clothing and footwear shops.  With just 7% of leisure/retail employment in 2000 they generated 17% of all growth.  Electrical and electronic retailing also stood out, along with pharmaceuticals and personal goods.  Presumably the success of these groups influenced the decline in department stores, a category associated with major centres.
The creative and performing arts also declined, raising even more questions if we believe that these industries, usually associated with the CBD, are essential to innovation and growth.
Figure 2: Employment Changes - Retail and Leisure Sectors in Auckland, 2000-2010 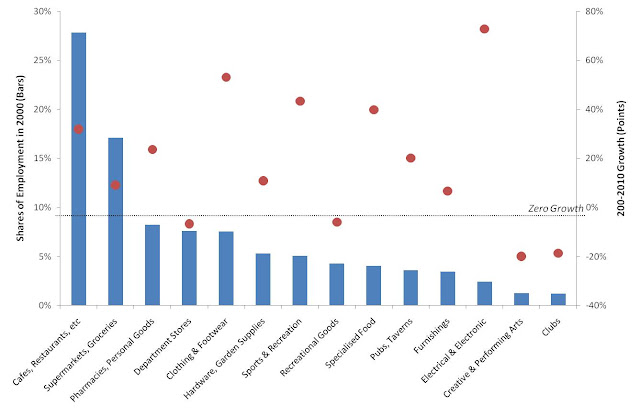 The redistribution of retailing
To examine the relationship between retail mix and growth I divided the city into: the CBD and inner city, the suburbs, all centres, and industrial areas (including the small rural areas for convenience).
The bars in the Figure 3 show the shares of city growth (or decline) in each retail sector by area.
Shares of supermarket and grocery store employment increased in industrial areas, and fell everywhere else.  This does not mean employment fell elsewhere, but the weight of growth was greatest “out-of-zone”.  Furniture and clothing and footwear outlets also did well in non-retail areas.
Industrial and suburban areas recorded small gains in department store employment, which fell everywhere else.  Industrial areas and centres reported gains in stores selling recreational goods, which also declined elsewhere.
Only specialty food favoured the inner city (and suburbs) although this is not a big sector.
Figure 3: Changes in Subregional Shares of Employment by Retail Category
2000-2010 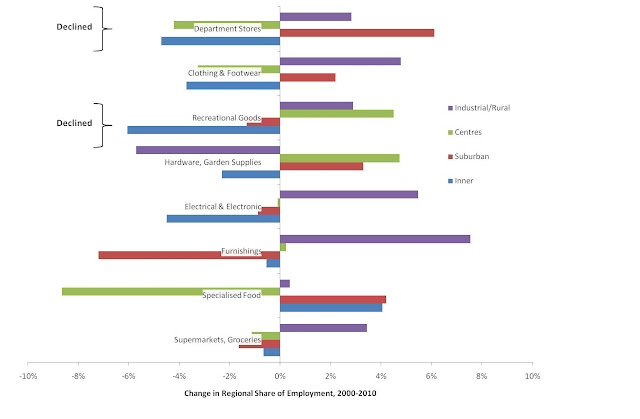 And the leisure sectors?
The central city is seen as increasingly important for leisure.  But this is not necessarily supported by the employment evidence.  The big growth sector, cafes, restaurants, and take-aways, performed better elsewhere.  It appears that the latté set has spread well beyond the CBD and that dining out no longer automatically means tripping into inner city restaurants.
Not only that, employment in the creative and performing arts declined in the city centre faster than elsewhere, belying another popular preconception about its role.
There’s more: inner city sport and recreation underperformed compared with the rest of the region despite the boom in gymnasiums.  The same goes for pubs and taverns.  Overall, industrial areas and centres seem to have been the growth leaders in leisure.
Figure 3: Changes in Subregional Shares of Leisure Sector Employment. 2000-2010 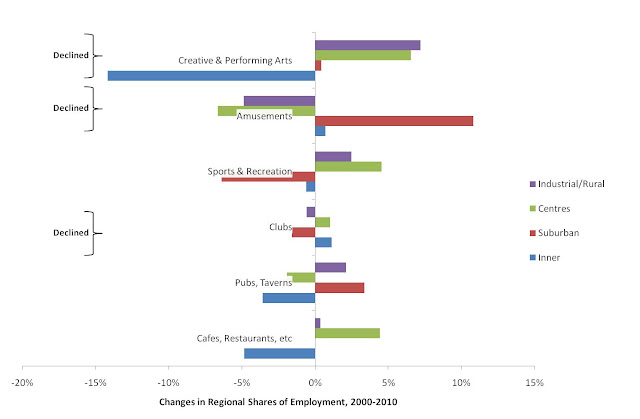 Let’s not throttle the patient
We could go into more detail.  But the message is clear: in our planning we need to allow for market realities, and the variety of places investors and consumers favour for retail and leisure.  Planning may be more effective if it responds to community preferences rather than aiming to impose order by arbitrarily excluding some activities from some places to prop up other activities in other places.
So, what of the CBD?
This evidence suggests that we should abandon simplistic models of hierarchies for planning either for retailing or for urban form.  If planning is reduced simply to resisting change or enforcing hierarchies, we impede productivity based growth and counter the vitality essential to the city’s and the city centre’s progress.


But there’s no need to panic about the future of the CBD.  We just need to recognise that cementing past functions in place is not the way to revitalise it (or our town centres).  We may also have to acknowledge that the CBD’s lagging performance in some areas may reflect success in others, in this case through displacement of commercial activity or limitation of new investment in retail and leisure by the expansion of inner city housing.
More generally, the view of what drives a successful city centre has to be far less mechanistic than appears to have been the case in planning till now.  The city centre is a living, evolving place.  Ten years ago financial services were the key to its growth.  Before that retailing played an important role.  Today education and tourism have centre stage.  Tomorrow it may be communications and technology.  Whatever the future holds, it is out of a culture of change and diversity that the CBD will grow, not as a result of imposing outmoded views of what should go where.
Posted by Phil McDermott

I think you had it right with the special interests. Maybe thats key. If retail demand drops in the CBD then the buildings are not going anywhere. So the result will be lower rents which will naturally attract other activity. Less retail and more other. No problem...except for the property owners who want HIGH rents of course.

The CBD will only fail as an establishment when rents cannot justify maintenance costs, leading to abandoned infrastructure. We would be a way off that I think?

A great example of the sort of process you refer to was the revival of strip centres and a whole range of diverse, new uses when mall development in the sixties, seventies and eighties undermined their traditonal retail roles. Rents fell and alternative uses took up the space: second hand shops, bric-a-brac, restaurants and wine bars, boutique clothes, book shops, personal services, real estate, etc.

I know of some chains that make no money from their Westfield mall shops - they have them as visible "flagship" stores - they help the brand image etc.

the real profit comes from the smaller centres/town centres etc

Great analysis, Phil. You might be interested in the below: this author really knows his stuff: (Editorial on the "New City" blog)

"......Writing in a publication of the 2008 9th World Congress of Metropolis, Sydney University’s John Black observed that “apart from some noticeable peaks, employment density is quite uniform across the [Sydney metropolitan] region”. According to the NSW Department of Transport, only 12 per cent of Sydney’s jobs are in the CBD and second tier centres like North Sydney, Chatswood, Parramatta, Hurstville and Penrith have less than 2 per cent each. David McCloskey, Bob Birrell and Rose Yip of Monash University (demographers, not urban planners) report the same about Melbourne. The CBD hosts around 20 per cent of jobs and the rest are scattered all over the metropolitan region.

Platitudes like “we must locate people close to where they work”, or “we must locate jobs close to where people live”, have little basis in reality. They infringe another immovable law of economics, relating to economic rents or bid-rents. This mechanism determines how industries and firms are distributed. Put simply, a parcel of land will go to whichever use delivers the highest profits. Centrally located land (near major transport or infrastructure hubs) commands high prices, and goes to the most profitable uses. Peripheral land goes to less profitable or marginal activities.

Over the last thirty years, economic deregulation, flexible transport, advanced communications and population growth have raised up a sector in the latter category, extracting value from cheap outer-metropolitan land and low rents. It includes industries like transport and distribution, building and construction, food, consumer products, personal services, wholesale and retail. They depend on favourable location costs and proximity to urban markets and labour pools. According to the Greater Western Sydney Economic Development Board, “prime industrial land with direct access to transport infrastructure is 75% cheaper [in GWS] than other areas of Sydney”.

Ultimately, green planning will phase out cheap urban land, undermining this sector and destroying jobs in the process....."