If a single city is the answer for Auckland, what was the question?

The establishment of a single council was intended to resolve governance issues that some people believe have limited Auckland’s economic development.  This was seen as a national issue because Auckland is meant to be the region most likely to tie New Zealand into the international economy.  It was thought that better local government would promote better economic performance by integrating land use, transport, economic, community, and environmental policy and management across the region, and rationalising infrastructure spending and service delivery.
Prompted by three ad hoc government Acts along the way, the Auckland Transition Agency has worked for 18 months to develop a single coherent, focused, and effective council in place of the previous eight councils.  Given the effort and resources that have gone into the revamp it may be a bit rich at this late stage to ask whether it is all really worth it.  Perhaps only time can now tell.  But let’s consider two of the reasons advanced for the reforms anyway to see if they stack up:
Reason 1: Auckland is the driver of the New Zealand economy, so needs a single voice
Actually, no; New Zealand’s economy remains unequivocally dependent on the primary sector.  Dairy products accounted for 21% by value of our merchandise exports in 2009, up from 15% ten years ago.  When dairying prospers, New Zealand prospers.  It goes deeper than this, though.  Collectively, the products of the land - food and fibre-based (including timber, pulp and paper, hides and skins) - still account for nearly two thirds of visible exports.
Yet, in 2009 Auckland housed only 5% of the nation’s primary production workforce, 19% of food manufacturing, and just 15% of timber and pulp processing and the textile employees.
If anything, Auckland’s a facilitator rather than generator New Zealand’s wealth.  It provides some of the infrastructure and services which primary-based exports use.  But if Auckland doesn’t do it, someone else, somewhere else, will.
Auckland also has some businesses that add value, but even this is tenuous.  The 21st century decline of manufacturing, for example, has been sharper here than in other parts of the country now that import substitution no longer provides the rationale for industrial investment.
Auckland’s employment growth over the past decade stood out in some activities.  The number of management consultants beavering away more than doubled between 2000 and 2009, to 20,000 or so, over half the country’s total.  Unfortunately, a sudden abundance of consultants is not evident in economic performance.  However, it may account for the 40 or so reports written over the decade dealing with what we need to do to do improve the Auckland economy!
Auckland also accounts for 47% of New Zealand’s employees in financial service.  Unfortunately (or perhaps fortunately), their numbers have ground to a halt over the past three years.  In any case, it’s far from clear how this sector added to the region’s well-being!
In fact, it turns out that Auckland’s economy depends on consumption more than production.  While professional services (such as architecture, and engineering, and consulting) have made a big contribution to the region, and some of these earn income from overseas, education, healthcare, construction, government, hospitality, wholesaling, and retailing are the sectors that have underpinned employment growth over the last decade.
Given that it contains New Zealand’s greatest concentration of consumers, employees, businesses, and investment, the question remains, how do we transform Auckland from a consumer to creator of wealth?  More to the point right now, is poor governance and a lack of civic leadership the answer to “the Auckland problem”?  Will rearranging the local government deckchairs, or simply tossing a few overboard, make a lot of difference?
Reason 2: Governance failures have held Auckland back
A plethora of reports on Auckland’s economy generates just six consistent themes to explain underperformance:
(1)  Too much invested in consumption-focused activity and not enough in exports.
(2)  Not enough innovation to drive productivity, create competitive advantage, and expand exports;
(3)  The need to keep costs low to attract investment and maintain competitiveness;
(4)  The need for good connectivity (transport, communications) to enable firms to work together well and to do international business effectively;
(5)  An expectation that we need to promote Auckland as a high density urban area to make productivity gain, lower costs, and lift connectivity;
(6)  A view that an attractive living environment will attract and keep the sorts of people we need to make things happen.
Without unravelling this prognosis – that can be done another time – it is hard to see how these matters will be changed simply by changing local government.  Somewhere in there, among the costs, are issues of infrastructure, red tape, and rates.  But they are hardly all-consuming.
Even if it has become something of a whipping boy there is no direct evidence that Auckland is over-burdened with local government.  The diagram below shows how many people employed in councils for every 1,000 residents.  In 2009 the national figure was 4.2 and the median across all New Zealand 4.3.  (Incidentally, there were also 7.5 central government employees for every thousand New Zealanders).  The local government figure for Auckland Region of just 3.3 is modest by comparison. 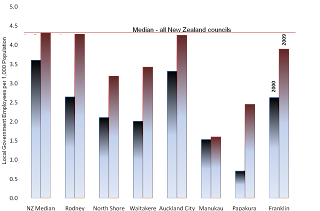 In fact, all Auckland council areas fall below the New Zealand figure.  Only Auckland City (which includes employees in the regional as well as local council) and the two rural districts (Rodney and Franklin) get anywhere the national figure.
Certainly differences in the weight of local government will be explained by differences in what councils do in different places and in how much of their services different councils contract out.  But there is no sign in these figures that Auckland is over-governed relative to the rest of New Zealand.  So suggesting that driving the ratio further down will by itself improve Auckland’s economic performance is a bit of a long shot, a triumph of hope over analysis.
Of course, being lean does not necessarily mean that a council will make better decisions anyway; bigger organisations might simply make bigger errors of resource misallocation.
Equally, there is no reason to expect that cutting back the number of employees or representatives will improve decision-making.  On the contrary, we should be worried about how a single large organisation can be as responsive in decision-making as the smaller ones it replaces, especially if the personnel and processes are little changed.
Where to Now?
In light of the evidence, it is not obvious why we are going to the pain and expense of consolidating eight into one.  Blaming local government was too simple an answer to the truly difficult question of how to keep Auckland moving ahead in an increasingly complex and crowded local setting and a volatile and competitive global environment?
As it happens, promoting Auckland’s growth has just become a whole lot harder.  The economic events of the last three years have finally brought home that boosting consumption and its ugly bedfellow –indebtedness – is not the way forward.  The economy needs a real transformation to redirect resources into wealth creation.  Consolidating our diverse councils at this critical time may be a distraction from the urgent issues that still need to be addressed.
The challenge for the new city council will be to ensure that the disruption that follows does not impede the real changes needed if Auckland is to participate effectively in the global economy.
Posted by Phil McDermott

Wendell Cox tells an interesting story about Portland which does not bode well for the Auckland experiment.
Go to:
http://www.newgeography.com/content/001790-portland-metros-competitiveness-problem

You might like to check with him as to whether you are using the same boundary for the Auckland CBD.

I have followed the convention of using the Harbourside, Auckland Central East and Auckland Central West Census Area Units to define the CBD. They are quite different in terms of access and function from the outer ring of Newton, Freemans Bay, Grafton east and West, which together accommodated 20,600 employees in 2009.