If we want to reduce the environmental impacts of modern society let’s prioritise consumption, not city form.  The evidence suggests that large cities (and especially city centres) are associated with a bigger environmental footprint than modest cities or suburbs.

This post looks at incomes and consumption, especially the consumption of housing and transport services, asking how far can local regulation really influence environmental impacts?


The other role is to plan and manage development in a way that reduces conflict among land uses.  In doing that they should aim to contain or control adverse spill-over impacts.


However, for councils to use their investment in infrastructure and land use regulation to determine in detail how and where people should live and consume pushes the boundaries of these roles, particularly when they try indirectly to reshape household behaviour by reshaping the city.


The key to understanding the environmental impacts of urbanised society is not urban form but household consumption, a function of income, not city plans.


Urbanisation and environmental impacts
In my last blog I showed how policies to increase residential densities around city and town centres assume a relationship between urban form and environmental impacts that is not supported by the evidence . In Australia, for example, residents of the New South Wales state capital, Sydney, particularly central Sydney, have by far the largest environmental impact per head.  Much lower levels are recorded in suburbs, smaller cities, and towns. (The same pattern is evident in all Australian states: have a look using the Australian Consumption Atlas).


The environmental impacts of intensive urban living outweigh any advantages of increasing scale and density. This means that policies that push agglomeration and intensification will increase rather than lower the impacts of urban living.


Household spending is the issue
The Australian study confirms that a city’s environmental impacts simply comprise the collective impacts of its residents.  Income is the driver of their consumption and thereby their demands on the environment.

If we really believe city form can in some way over-ride income- and consumption-driven environmental impacts, then we should heed the evidence, and plan for modest, small scale, dispersed urban settlement.


Spending on housing and transport in New Zealand
Household Expenditure Survey data for New Zealand (and elsewhere) provide an opportunity to explore the role of income in consumption generally.


First, take a look at the distribution of spending on housing, transport, and discretionary goods (recreation and cultural services is used to represent the latter category) according to household incomes in 2010. Average spending levels have been organised by income decile for this purpose, each group containing 10% of households. Average incomes increase from decile 1 (the lowest earning 10% of households) to decile 10 (the highest earning 10%).


The pattern is pretty predictable.  Housing dominates the spending of low decile households.  It accounts for 34% in the lowest decile, falling to 22% in the ninth.  It rises again (to 24%) in the highest earning decile (10). This lift between decile 9 and 10 households no doubt reflects higher discretionary spending in the latter group by way of additional space, the quality of fit-outs, and second homes.


Shares of Household Spending to Selected Categories, by Income Band 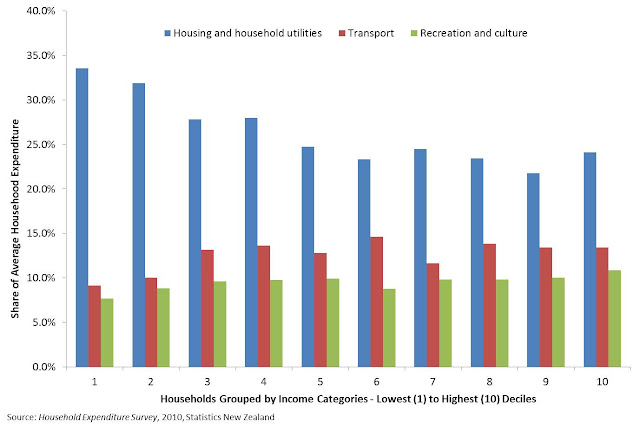 It turns out that it’s not that simple.  Contrary to the theory, higher income households actually spend more of their income on transport.  That makes sense when we realise that commuting accounts for only around 25% of time spent travelling by New Zealanders.  The capacity to take discretionary trips is a bigger determinant of transport consumption than non-discretionary commuting and work-based trips.


The Relationship Between Spending on Housing and Transport 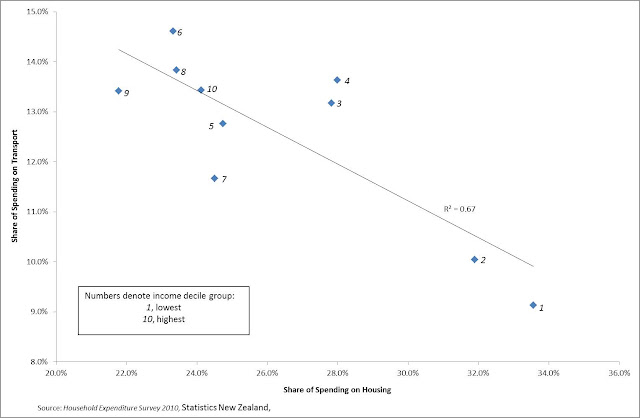 Lower incomes leave a lot less to spend on discretionary goods and services once housing and essential transport spending are covered.[1] Higher income households can and do travel more and consume more.  Their behaviour is unlikely to be significantly influenced by changing city form.


Who spends how much?
Not surprisingly total consumption in New Zealand is dominated by higher income households: the 20% highest earning households (deciles 9 and 10) account for 35% of total spending on goods and services, while the lowest earning 20% (deciles 1 and 2) account for just 20%.


And decile 10 households account for 7 times more spending on transport than decile 1 households.  They spend 5.5 times more on recreation and cultural services, and 3.5 times as much on food.
The Contribution of Household Total Expenditure by Income Band, Selected Categories If refurbished housing in high amenity inner city living is expensive, guess which income groups will be living there?  The high consumers, obviously.  And in Auckland, at least, it seems that city planners and policy-makers are keen to deliver them the high order consumer services that will promote ever-more discretionary spending around the CBD(although much of central city resident travel may be taken up with recreational and social trip-making away from there).

A high social cost for little environmental benefit?
The conclusion is straightforward: higher incomes mean more expenditure on additional housing, transport, and discretionary goods and services with correspondingly high environmental impacts.  If incomes are higher in cities, then their collective impacts will be high too.

Planning policies won't change that much - except to the extent that they erode consumption by inflating the basic costs of living, something that impacts most heavily on lower income households.

Fiddling with city form is unlikely to significantly reduce the impact of higher incomes and associated spending on the environment.  Increasing dwelling and living costs by promoting larger cities, higher residential densities, and uneconomic transit systems simply penalises low income households already committing substantial shares of their spending to housing and transport.  And this is the group that, by dint of constrained consumption, has the lowest impact on the environment.

Better to address environment issues directly
From a policy perspective, environmental issues are better tackled directly.  This may mean promoting environmentally friendly goods and services, promoting low impact technologies (including low impact housing, fuel efficient vehicles, and the like), and encouraging responsible consumption. If we are really serious about environmental threats, we need to examine the efficiency of current pricing practices and even taxation measures, rather than leaning so heavily on clumsy, indirect, and ultimately spurious urban planning policies.


[1]           Overseas spending is omitted from discretionary spending here as it is included in the catch-all category “Other Expenditure", which accounts for 6% of decile 1 spending and 11% of decile 10.
Posted by Phil McDermott