Trans-Tasman Blues – the Housing Crisis and Our Future

While filling in time in the Auckland International Airport waiting hall last Thursday I read about a Property Council discussion of what accommodating  an extra 1.2 million people over the next 30 years might entail. Martin Udale, the development expert heading Essentia Consulting Group, talked about having to push the envelope to meet the challenge posed by the Council’s population growth expectation and its commitment to housing three quarters of that  growth over the next thirty years within the city's boundaries: that's 10,000 new dwellings a year (not counting any catch up from the current  shortfall ).

This is going to need as much as 15% of the current stock to first be demolished, to be replaced with infill housing – apartments and townhouses -- at a ratio of perhaps three or four new for every one knocked down . But for this to happen, Martin said,  Aucklanders -- and that includes planners -- have to first "get over their phobia about height".

Now that’s a challenge. Building medium density housing to a standard and in localities that Aucklanders might like at a price they might afford has so far proven well nigh impossible. New apartments are generally over-priced relative to detached houses because of land prices in preferred locations, consenting and development challenges, and construction costs.  The result has often been cost cutting and poor construction. Consequently, most apartments built over the last 15 years cater for transient populations – students, recent immigrants, solos, non-family groups –often in tight accommodation.

Outside the box
There are other options for increasing densities – in greenfields, satellite towns, and through selective suburban infill and brownfield redevelopment (including developments modelled on retirement communities and suburban villages).  Going down this path – of decentralised intensification --- would take a serious re-think by the city fathers, though, and their planning advisors.

But if we take on the challenge  of demolishing 50,000 to 85,000 of our existing housing to build apartments and townhouses, we might inadvertently solve the problem another way: by  stalling population growth.

Or outside the country
The slowdown is already here.  And intensification along the proposed lines with the congestion and loss of amenity that goes with it will make Auckland that much less liveable and Australia that much more attractive.

Which brings me back to why I was waiting at the airport.  My wife was returning from visiting our three Australian-based children and their families. She’s beginning to think we should move there.  Some of our friends have done just that.  Even though they are not far off retirement age, their skills and experience are transportable if they want to work in Australia and be closer to their families.

And they are in good company. According to Statistics New Zealand (SNZ) there was a net national loss (an excess of long-term departures over arrivals) to Australia of 486,000 people over the past 30 years, 212,000 of those in the last ten years alone (September years).  The trend has been accelerating (Chart 1).  Add that to the cyclical nature of movements from other countries and we can anticipate more, and more prolonged, net migration losses from all sources in the future. 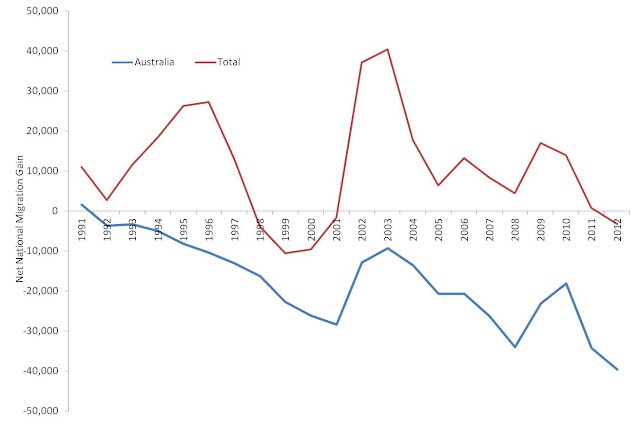 So how will Auckland fare?
The latest population projections from SNZ suggest that there could be another 480,000 people living in Auckland in 20 years time under a “medium scenario”,  a figure which  more or less lines up with 10,000 new dwellings a year.  Over a third of this  growth is based on assumed migration gains .  Of course, some of the natural increase projected also depends on migration : fewer migrants = fewer babies.

Going down
So I took a look at the assumptions behind the projections. According to SNZ sources, there was a net gain of 66,600 international migrants (arrivals less departures) in the five years ending 2006, but that dropped 56% to 37,700 between 2006 and 2011 (September years).

And the net loss from Auckland to other parts of New Zealand from internal migration has been growing –18,000 estimated between 2001 and 2006.  So, international and internal migration over those boom years contributed around 48,000 new citizens, 9,600 a year.

Without a 2011 Census subsequent internal movements cannot be calculated.  But since 2005 gains from  international migration  have continued to fall, down to an average  7,000 a year. The trend continued in 2012 with a gain of just 4,100 (Chart 2). 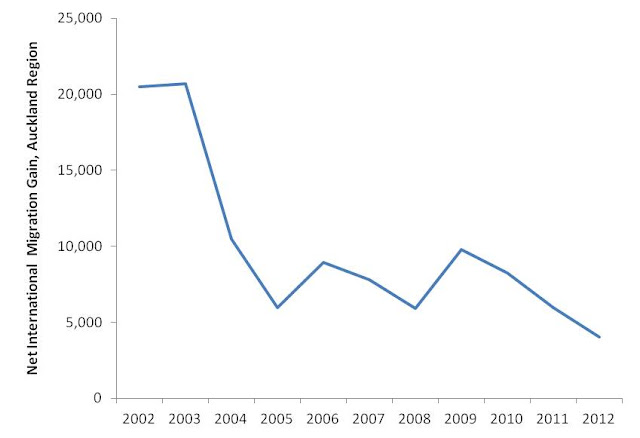 More hope than history?
The SNZ medium assumptions in fact assume an average 6,000 gain in migration through to 2016 (actually, that’s now closer to 6,500 following the overshoot in 2012), before it is assumed to jump back to boom-time figures of 9,000 a year for the next 15 years.  But the conditions experienced ten years ago are unlikely to be repeated in the foreseeable future.  And our longer history certainly doesn't support a view of such prolonged gains.  And even a modest 6,000 a year through to 2016  looks  out of reach if real house prices cannot be brought down to where they were a decade ago.

So who are we losing?
So what does this mean?  Well, over the past twenty years, more than half of the people who have left Auckland have been aged between 15 and 34 (again, based on SNZ data), mostly educated young adults at the start of their work career and entering the housing chain.  Lose them, and we can trim our housing demand figures. More than that, though, we can reduce our aggregate fertility expectations and lower forecasts of workforce growth

Some of these young adults  are embarking on the traditional New Zealand passage of rite, the Overseas Experience trip  – rather like my daughter and her partner did ten years ago.  But they are now well settled north of Sydney with an affordable home, pool and yard for the children, great amenities, good friends,  good schools and jobs.  I don’t see them – or many others like them – heading back this way in my lifetime.

In any case, Chart 3 shows a shift over time towards more  family groups leaving, older adults and children. This is worrying because they don't  make such a significant move without  good reason.  Could it be tied up with housing affordability?  Is it associated with the challenges facing the intermediate housing sector – people with good jobs and dual incomes still unable to afford a house in Auckland ? And not wanting to live in ever-more crowded suburbs?

Chart 3: Age Distribution of People Leaving Auckland for the Long-Term 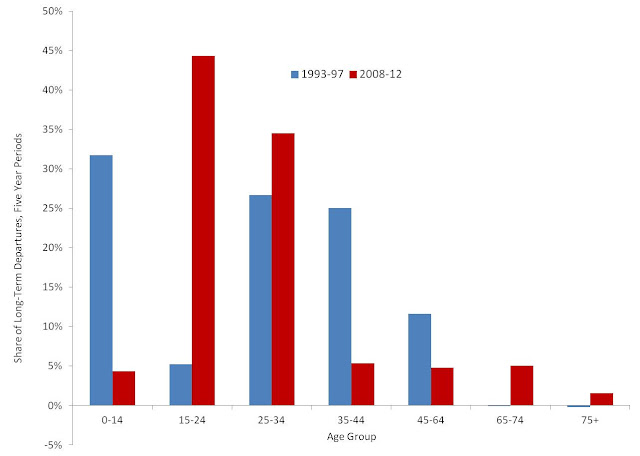 Of course, there is always the prospect of resurgence in immigration from Asian origins offseting the  loss of young New Zealanders.  Even that is not  assured, though.  The prolonged GFC  and economic uncertainty here changes New Zealand's appeal  relative to other options opening up to them. We cannot count on New Zealand always being a destination of choice, especially if we are busy recreating the sorts of urban densities that many potential immigrants are moving from.

Maybe exporting some of our housing problem to Australia  is positive move – but we are also exporting our future and accelerating the ageing of our city as a result.  It would be a shame if by going along with the urban design consequences of consolidation that the advocates of a compact city are bestowing on us  the Property Council somehow legitimises the dogma that risks the undoing of our city.

It is time, instead, to begin to think about quality not quantity in our urban planning.  And that means really thinking outside the compact city box.

Really interesting point about the "inadvertent" solution to the population growth problem by demolishing 50-80,000 houses! Clearly some interesting scheduling precision is required to keep to the 70:30 rule.

A brilliant piece which should be on the front page of the Herald if there was any justice in this world.
I moved to Adelaide just over a year ago, mainly because of the cost of living in Auckland. I'm earning about the same, but the cost of living including housing here is about 25% lower. The difference is just crazy.
Udale is living in a pommie higher density dream world, as are the Auckland planners. As you rightly point out the economics of developing medium / high density in Auckland are appalling, generally speaking it just doesn't work. And the planners don't understand that the reasons so much medium density housing in Auckland has been so shite is because the economics are so poor, requiring multiple quality corners to be cut.
Auckland should be doing what Aus is doing so well in some locations - creating greenfield developments with a range of housing choice. Here in Adelaide, usually 15-20% of greenfield developments have smaller lot / cottage options - usually a 3 bedroom, 1 bathroom, single garage / carport cottage on a 250-300 sq m section, good quality housing, selling for about 320-350K. These properties are often selling like hotcakes
That could easily be happening in locations such as Dairy Flat and Pukekohe etc. Its a million miles from rocket science.
Also good work on the stats Phil. Like you, I suspect that the planning policies will drive the population outcomes a lot lower than the "medium scenario".
And finally a brickbat to the govt today on coming out with another lame excuse for "action" on housing.