Cities in search of resilience

Resilience: the ability to recover quickly from setbacks (Encarta)
An age of extreme events?

Without debating whether an increase in the frequency of extreme events reflects climate warming , such events can be catastrophic when they impact on densely populated areas.  Natural disturbances, whether geophysical (tsunami, earthquakes, mudslides) or climatic (flooding, hurricane strength winds, tidal surges), become disasters if they strike heavily populated centres.

So do human acts of aggression.  The tactic of terrorising civilian populations taken to new heights in the bombing raids of the Second World War and adopted by today’s extremists is most effective – and destructive - when directed at the heart of major cities.
Promoting preparedness
So how do we respond, especially given the expectation that we face an increase in such events?

We can prepare ourselves individually by sensible precautions. House design, construction, maintenance can help in high risk areas.  Having household plans and resources for escape, survival, and recovery is becoming more common.  As communities we can build our collective emergency response and recovery capacity.  We can also look to our hinterlands to ensure that land use practices -- clearances, monocultures, river straightening, irrigation, and dams -- do not precipitate major events such as dust storms or floods that impact on cities downwind and downstream.
The Civil Defence Emergency Management Act 2002 increased the New Zealand government’s focus on risk reduction, hazard avoidance, and community readiness.  In particular, Part 1 (3) (d) requires:
local authorities to co-ordinate, through regional groups, planning, programmes, and activities related to civil defence emergency management across the areas of reduction, readiness, response, and recovery, and encourage co-operation and joint action within those regional groups;
The effects of climate change, presumably including the potential for violent storms and inundation, are matters to which people exercising powers under the Resource Management Act should have particular regard (Part 2 7 (i)).
Vulnerable by design
There is an imperative in legislation in New Zealand, then, for local and regional councils to consider hazard mitigation and risk avoidance in our urban planning and design.  This is so internationally. 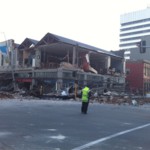 It is not coincidence that many – if not most – major cities in the world are built on rivers or at the coast given their origins as nodal points, or  on fertile flood plains, in the lee of mountains, between mountains and sea, even on fault lines.  They are consequently built across unstable and vulnerable sites in many instances.  This is should be a fundamental consideration in our urban design, architecture, and engineering. [1]
So here are some reasons why we might seriously question the compact city paradigm which so influences planning and urban design today:
Looking over these issues, it is unsurprising that our past history of increasing prosperity was a history of reducing urban densities even as rural-urban migration pushed up city populations. What is surprising is that we seem to have given up the quest to make this same movement -- essentially a de facto public health programme -- work in a resource constrained environment.
Back to the future?
One of the drivers of early town and country planning was the desire to protect public health, with zones separating industry from where people lived.  A healthy workforce was a productive workforce, so it made sense to reduce the exposure of people to industrial pollution.  There were also public health benefits from getting families out of high density slums into something approximating a rural lifestyle with access to space, gardens, and parks.  The resulting residential areas – the suburbs -- came to be highly valued in the 20th century.  Many people still value them, even in a post-industrial age.
But in today’s quest to preserve city edges, to support public transit, and curtail car use planners have moved to reinstate higher urban densities around existing city centres, denigrating suburban life as “sprawl”, and downplaying the new risks that revisiting the old ways raise.
Planning for resilience
We may have to rethink these revisionary ideals in the face of reality.  A better understanding of resource constraints and the need for diversity may mean that we shouldn't look at expanding our cities in the uncritical way we did in the past, providing large plots for small households.  But for many people, and perhaps for nature, high density, mixed use is not necessarily the best alternative.
I’m not sure what form a move to resilience in urban design might favour.  Most probably it will – and should – vary from place to place.  Decentralisation will have a role to play.  Certainly smaller centres, within, on, or beyond the edges of large cities, with a full range of services and amenities and a high level of self sufficiency are likely to offer more resilience to communities than centralised, hierarchical and interdependent services stretched over the entire city.
In some places, well constructed and spacious high rise apartments set in extensive green spaces might work.  In others, terraced housing, each dwelling with a small garden, interconnected by pathways and roads to nearby community and commercial centres will be appropriate.  Traditional suburbs, perhaps scaled down, will have their place, providing private and public spaces to nurture families and nature.  High density suburbs with extensive parks, green belts, and generous transport corridors are another option.
Whatever the form, the risk of disasters in our cities being compounded by crowding and mean design calls for putting resilience into the urban design equation.  The possibility of marginal long-term savings in fuel consumption and vehicle emissions used to justify constricting our urban places (and lives) may otherwise come at too high a cost.

[1]               This is hardly an original observation.  It was argued for Wellington in 1981, for example, by A Cibirowski in “Urban design and physical planning tools to make cities safer in earthquake prone areas”, cited in McKay, B (2005) “Plan Tectonics", Planning Quarterly
Posted by Phil McDermott

Absolutely.
And surely events in Australia should be making us ask ourselves why Britomart, the approach to the harbour bridge, and the Westmere motorway intersection, are all underground and the tunnels are below sea level?

How will Auckklanders get to the Shore? Rail will be out of action immediately, but then rail is always first to fail.

Katrina demonstrated that the best mode of transport to get out of town were cars and buses on elevated highways.

Unfortunately, even Auckland's arterial roads are vulnerable. The remnants of Cyclone Wilma passed by the city on 23 January with the heavy rain and high tides resulting in road closures on key roads to the center - the north western motorway, the Harbour Bridge approach, and Tamaki Drive. The Herald also reported that the "king tide stretched into the lower streets of downtown Auckland. Firefighters fought to clear commercial premises, which became waterlogged as rainfall compounded the tide".

This highlights a significant risk from overloaded servcies: "a 2004 report to the region's former seven territorial councils called for a doubling of the combined stormwater works programme of about $2 billion over 20 years" (NZ Hearld, Jan 25 2011, "Big wet leaves a trail of carnage")

This was an intense storm, but we can expect more. It raises questions about how far we should continue to intensify development in a centre beyond its underlying design capacity, with critical infrastructure at risk and commerce vulnerable to disruption.
.